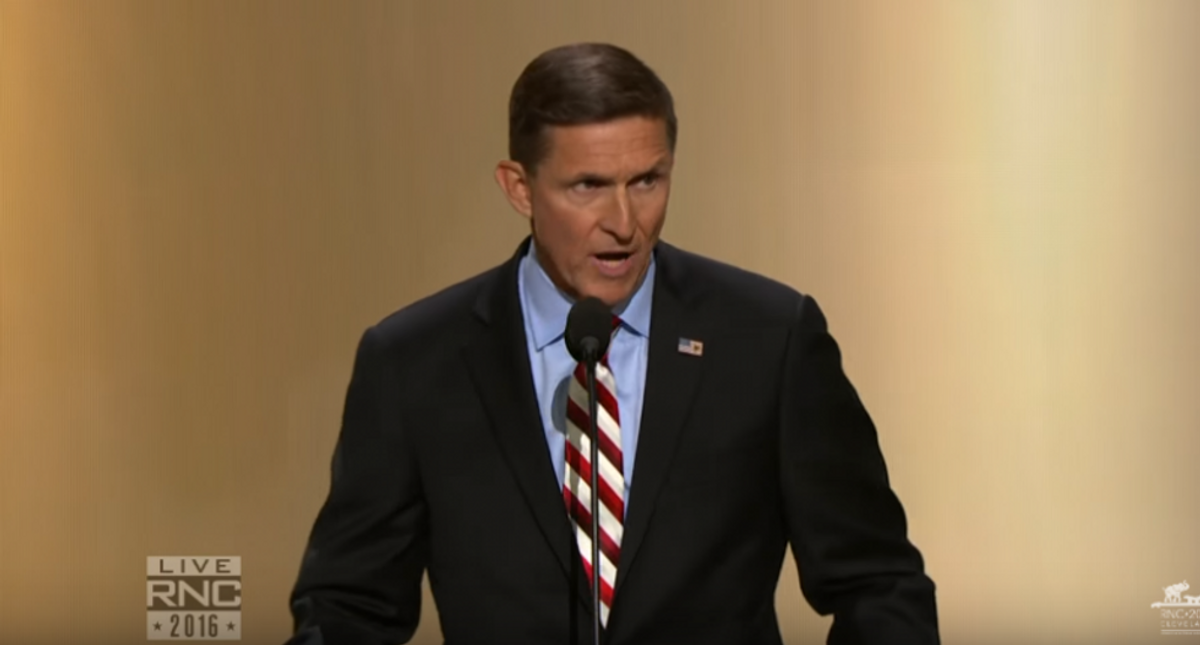 The second-most revered figure in the QAnon conspiracy firmament called for a military coup in the United States. Again. Retired three-star general and former Trump campaign national security advisor Mike Flynn called for the end of democracy during a question-and-answer session last weekend at a QAnon conference in Dallas.

"I'm a simple Marine," a grizzled audience member said, "I wanna know why what happened in Minamar (sic) can't happen here." The room erupted. Flynn waited for the cheering to subside and said, "No reason. I mean, it should happen here."

Flynn reportedly called the conference organizers to backtrack. He's now denying that he said what we all saw him say, but let's get one thing straight: Mike Flynn is a liar.

Trump fired him for lying to Mike Pence about Russia. He pleaded guilty to lying to the FBI, but he lied in his plea deal, so Trump had to pardon him. Now he's lying about how he called for a military coup in the United States. On video. This is nothing new for Flynn. After the 2020 election, Flynn privately urged then-president Donald Trump to send troops to "re-run" the election, an idea he'd previously floated in the media.

It's nothing new for QAnon either. QAnon supporters have been cheering on the coup in Myanmar since the military overthrew the democratically elected government in February. The junta has killed over 800 people, including more than 40 children, but QAnon supporters don't know anything about Myanmar's internal politics. They just like coups. After Trump's failed coup attempt on January 6, many of them found it comforting to know a military still could overthrow a democracy somewhere.

And why wouldn't they? The beating heart of QAnon's dark theology is The Storm, the military coup that is always right around the corner. The Storm is the day when Donald Trump and the armed forces liquidates QAnon's political enemies: Democrats, Hollywood celebrities, the media, and anyone who stands against them. The former president will retake his rightful place in the White House, democracy be damned.

According to a new poll, nearly a quarter of white evangelicals believe The Storm is coming to restore "rightful leaders." This mythology fits naturally with the Big Lie that Trump won the election. QAnon believers heard Donald Trump's call to come to Washington on January 6 as the coming of the storm. Many of them believed they were being summoned to take part in the long-awaited battle between good and evil.

Most normal people think of QAnon as the "pedo cabal" people. Indeed, QAnon talks a good game about saving the children from pedophiles. As disturbing as they sound, these child-abuse fantasies are good for recruiting unsuspecting converts. After all, everyone wants to prevent child abuse. QAnon has deep roots in evangelical Christianity and its most fervent proponents have thought long and hard—and written with uncharacteristic coherence—about how to best recruit. Attitude change begins with finding common ground. You can get almost anyone to agree that child abuse is a problem. That provides the common ground needed to begin a conversation in which the believer can plant seeds in the prospective convert's mind about other aspects of QAnon. This process is called "red-pilling," a reference to The Matrix, a movie during which the hero swallows the red pill to dissolve illusion and reveal ultimate reality.

The news media's focus on pedophilia obscures the core of QAnon's ideology, which is a longing for glorious, purifying and revelational violence. The pedophiles of QAnon mythology are the alter-egos of powerful Democratic politicians, Hollywood celebrities, journalists and Jewish financiers George Soros and the Rothschilds. These are the villains who will be purged by the military when The Storm is finally upon us.

Unfortunately for QAnon, normal people love democracy as much as they hate pedophilia. So recruiters don't open with talk of a coup. The faithful avoid talking about it to journalists. That's why Flynn is taking pains to walk back his comment. While The Storm is normal in QAnon circles, it's still taboo in the outside world.