'You didn't have the spine': Chris Wallace chews up Mick Mulvaney for resigning at the last minute 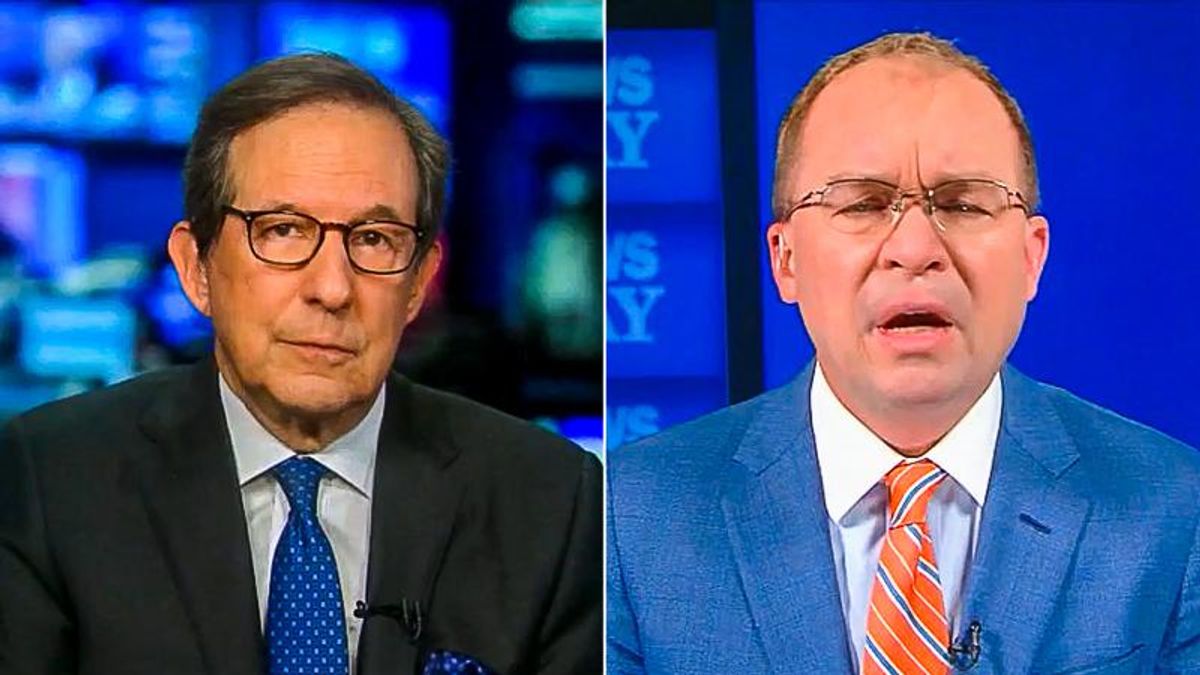 During an interview on Fox News Sunday, Wallace asked Mulvaney if he felt any responsibility for the insurrection.

"I feel a lot of emotions this week, I was shocked, I was angered, I was sad, I was embarrassed, I was frustrated," Mulvaney opined. "And I'm still trying to figure out what I could have done differently. I've been out of the White House for eight months."

"Something is very different now than we saw than when I worked there," Mulvaney insisted.

Wallace, however, wasn't satisfied with the former official's answer.

"There are people who say he isn't different," Wallace said. "This is the Donald Trump you worked for."

The Fox News host then suggested that Mulvaney "didn't have the spine to tell the president no."

"It's not true," Mulvaney replied. "It's not good to surround yourself with yes men."

"You were one of the yes men," Wallace charged.

Mulvaney offered a defense: "It's easy now, Chris, for people who don't like the president, who never liked the president, who always thought the president was a monster, who wanted him to be that, people who saw him through the filter of the media, to say, 'Oh, look, we told you so, we knew it was always going to be like this.' But those of us who worked with him every single day knew that the exact opposite was true, knew that he was into the policy, he was excited about what we had done for the country."

"But again, Mick, a lot of people say it didn't change on Wednesday," Wallace observed before reminding Mulvaney that he had defended the president after he cut off aid to Ukraine in an effort to force the country to dig up dirt on then-presidential candidate Joe Biden.

"Why didn't you resign over that?" Wallace wondered. "Why not resign over what I know you don't think was a proper thing for the president to do, cutting off aid to Ukraine."

"No, no, no," Mulvaney objected. "That original impeachment -- and I didn't realize we were going to get into this today -- had absolutely nothing to do with anything that was actually wrong. It was the Democrats looking for an excuse and they found one line in a transcript."

"These are policy differences," Mulvaney scoffed. "Things you think the country should look one way, we think it should look another. These are differences of style, the way the president speaks. Did he misspeak at Charlottesville? Yes. Should he have corrected it? Yes. Did he handle it poorly? Yes. But it was not something that people resign over."