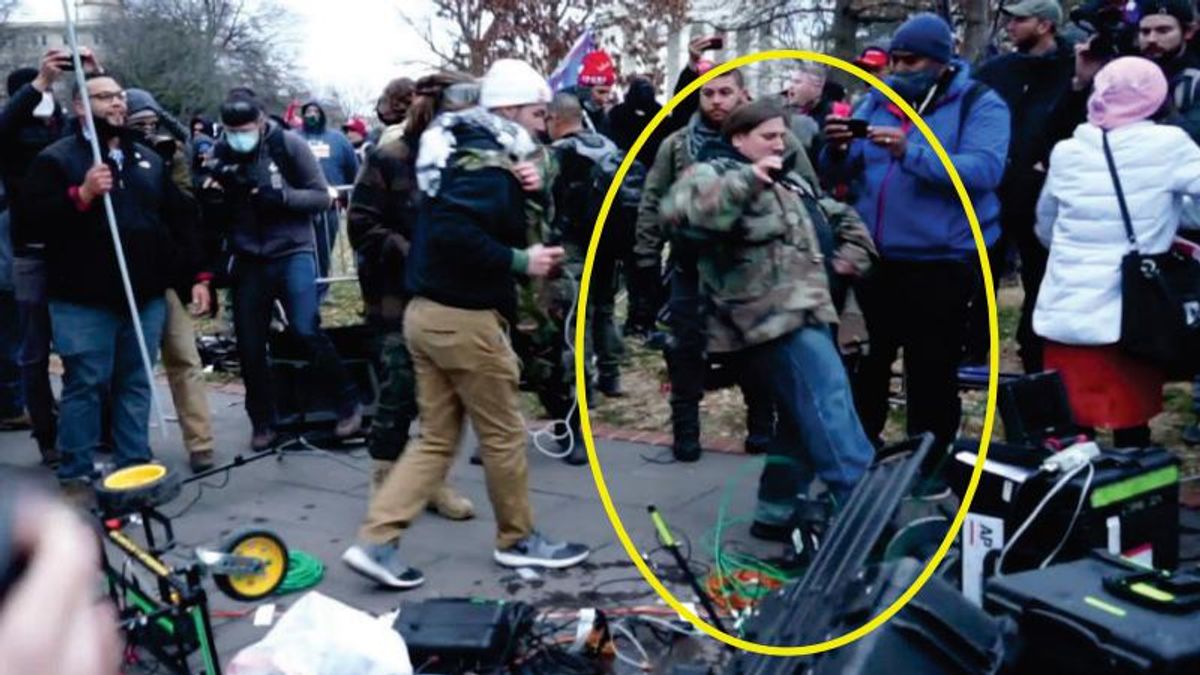 Gabriel Brown, a YouTuber and Proud Boy who has rallied at Charlottesville and other fascist scenes, was arrested by the FBI today on charges of violence, property destruction and disorderly conduct at the January 6 riot.

Brown, 38, of the village of Bayville on Long Island, NY, "kicked and/or stomped on media equipment and verbally encouraged others to steal and destroy media equipment," the FBI criminal complaint stated. Brown recorded himself and the event for his GB0083 YouTube channel, the FBI said. Here's some of its description:

"At one point in the video, Brown gets a bullhorn from another protester and shouts toward the U.S. Capitol, "You stole the Senate from us, you stole the House from us, and now you think you're going to steal the presidency from us? Let me tell you something—you want to take peaceful revolution away from us? Well, you better prepare for f*cking violent revolution. I don't want violence. I believe in peaceful resolve. But you're making it goddamn impossible for us."

Brown also is seen on the video "encouraging the theft and destruction of media equipment, the complaint says, quoting him as saying "Yeah, f*ck yeah. Take a souvenir. F*ck yeah. Anything good in there? Yeah, smash that sh*t" as another man stomped on a case containing media equipment."

Brown then addresses the media, although its members had largely evacuated the scene as the mob approached to harass them: "They're allowed to do this. You didn't want to do your f*cking job. Well, you know what, now you can't. You know what, the media did not want to do its job so now they f*cking can't. We'll do it! We got the cameras. We got the freaking voice. We're going to go out and do it. Their legacy is dead. It's dead right here.

"F*ck the AP. You f*cking frauds. You want to f*cking lie about all of us. Well, you know what, here, report this sh*t! Because your f*cking media is dead mother f*cker. It's dead, the legacy media is dead."

In another video on his channel, Brown is seen signing a "Stop the Steal" banner affixed to the side of a trailer pulled by a truck.

"Freedom! I'm signing my John Hancock on this, because I give my life to liberty, and I will stand by it as I always have. I swore an oath to defend our liberty a long time ago, and that's why I'm signing this."

As to what Brown might have done long ago, he was called out at Vice.com in February for his role at the Capitol riot -- more than four months before his arrest -- in a story headlined, "This Is the Proud Boys Supporter Who Filmed Attacks on the Media at the Capitol Riot."

In that story, for which the FBI did not comment, Vice reported that Brown is "a live-streamer from Long Island whose involvement in far-right activism goes back to the deadly 'Unite the Right' rally in Charlottesville."

The Vice report includes pictures of Brown in Charlottesville and -- perhaps more notably -- one in 2017 with Trump insider and consummate conspiracy theorist Roger Stone.

"In May 2017, Brown posted a video from the 'Free Speech' rally in Boston, which drew an array of alt-right activists including militias, Proud Boys, and MAGA teens," Vice reported. "That month, he posed for a photograph alongside former Trump advisor Roger Stone, ex-Proud Boy Jovi Val, and Proud Boy "Tiny Toese" who recently served time in prison for assault on antifascist protesters.

"That same month, he attended a protest in New York City against CUNY's invitation to Muslim-American activist Linda Sarsour to deliver the school's commencement speech. The event was also attended by the likes of Proud Boy founder Gavin McGinnes, Laura Loomer, Milo Yiannopolous and other anti-Muslim activists who waved 'Kekistan' flags, a popular alt-right meme that started on 4chan. He was also photographed at an official Proud Boy meeting in New York City that summer, according to NYC Antifa, who have tracked Proud Boy activity closely.

According to Its Going Down, a hub for antifascist organizing, Brown also traveled to Chantilly, Virginia that summer, to join protesters like Infowars' Owen Shroyer outside the annual conference of the Bilderberg Group, which draws European and North American political figures and elites to discuss transatlantic issues. It's a popular target among conspiracy theorists, which was why Jones and his Infowars crew were there. Brown posed for a photograph alongside Chris Cantwell, also known as the "Crying Nazi." A couple months later, Cantwell and Brown's paths crossed again, this time in Charlottesville, Virginia.