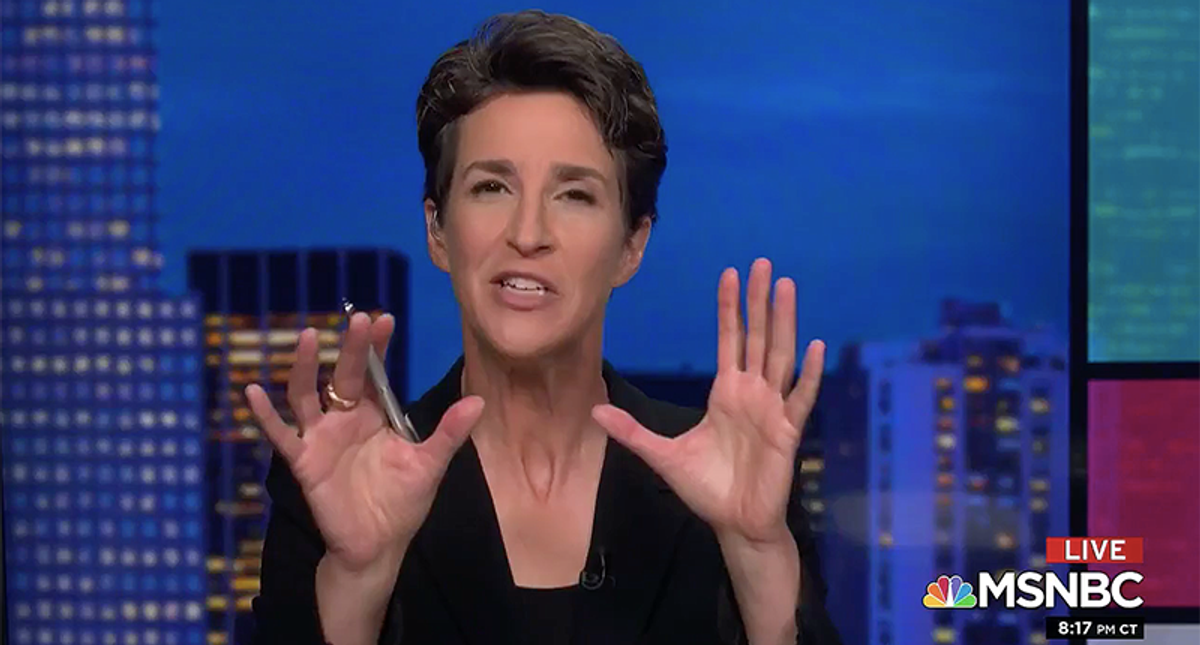 "Yeah, they stormed the Capitol and tried to kill the vice president and the speaker of the House and probably lots of us," Maddow said of what she believes is GOP thinking. "And they stormed the Senate chamber and went through all of our desks and had guns and tasers and bats and ransacked the place and thought that would be the way that they would take control of the government while threatening to kill all of us. But you know what? It was nearly three weeks ago."

She noted 45 Republicans Tuesday voted that the attack was meaningless.

"So, if you mount a violent attack on the U.S. government, including your supporters seemingly being been on trying to kill the vice president and members of House and Senate, depending on the timing, it might be okay," Maddow continued. "They are really cool with this being what their party does right now. It is almost impossible to believe that that is where they are."

She then reported that newly elected Republican Marjorie Taylor Greene was outed for her 2018 and 2019 execution threats against House Speaker Nancy Pelosi, former President Barack Obama, former Secretary John Kerry, agents at the FBI and other Democrats.

"No sign whatsoever that will have any impact on Miss Greene's standing in the Republican Party or in Congress, because that's not weird for the Republican Party anymore," said Maddow. "And often when a party gets voted out of power, like the Republicans just were, they no longer hold the White House or the House or the Senate. Often, when that happens, in normal politics, you see all this reporting, all the headlines about 'oh, the party in disarray.' This is a very particular and peculiar kind of disarray."

This, she explained, is what happens to a party when "they are dealing with what we would usually think of as a fringe violent extremist criminal movement. But it is right at the heart of what they are offering the country and they are really taking great pains to make sure that the leader who drove them fastest and hardest, can run as their standard-bearer in 2024."

Meanwhile, she said, the Democratic Party is desperately trying to govern to pass the slate of bills that have been collecting dust on McConnell's desk for years.

"It is very hard to have a stable democracy based on a two-party system if that's one of the two parties," Maddow said. "If that's their contention right now. 'What do we do about our members who bring guns onto the floor and saying our speaker should have a bullet in the head? And what do we do about a president who just mounted an attack on the Capitol? Should we just make sure his followers are charged and make sure he come back and run for president in 2024?'"

This, she said, isn't about the politics of the day, but about the "viability of democracy."

"On the Democratic side, they're just trying to govern," she said. "They're trying to figure out how to get something done without having to deal with that dumpster fire on the other side. How can that be your governing partner? However much we tend to treat politics as a horse race, a numbers game in terms of how many seats on each side, how much elections have consequences based on how many people are on each committee. Once the consequences are that you are in control of both Houses of Congress and the White House, the thing that is most key to your political success is to show whether you can do good things for the country with your power."

Watch a clip from Maddow's opener below:

the dumpster fire that is the gop www.youtube.com