On his first day on the job, Gov. Greg Gianforte (R-MT) nominated a controversial sheriff to run Montana's prison system.

"Governor Greg Gianforte announced on Monday that he has nominated Gallatin County Sheriff Brian Gootkin to lead the Montana Department of Corrections in his new administration," MTN News reported Monday. "Sheriff Gootkin wrapped up 27 years at the Gallatin County Sheriff's Office last week, according to a news release from the Governor's Office. Before being elected sheriff, Gootkin served as patrol deputy, detective with the Missouri River Drug Task Force, sergeant in Big Sky, jail administrator, and undersheriff."

Gootkin was serving as sheriff in 2017 when Gianforte assaulted a reporter for The Guardian on the eve of a special congressional election to fill the statewide seat vacated when Ryan Zinke became Secretary of Interior.

The incident was investigated by Gootkin's office.

As Raw Story was first to report, Jacobs left the emergency room at the local hospital in a sling.

Yet Gianforte did not arrest by Gootkin, who was a donor to his congressional campaign, even though the Republican politician was caught lying about his assault on a reporter.

The local newspaper in the community where both men lived at the time explained the scandal in a hard-hitting editorial.

"To say we were disappointed in Greg Gianforte would be a massive understatement," The Bozeman Daily Chronicle wrote. "His actions and his campaign's misleading statements immediately afterward have embarrassed our community and our state and further exasperated the chasm of political discord in our country."

"Essentially, Gianforte's campaign took the stance that the allegations of the 'liberal journalist' couldn't be believed. It's all 'fake news,' don't you know," the newspaper explained. "This might have remained the storyline except for an audiotape of the incident and the eyewitness accounts from a Fox News team that clearly contradict the version offered by Gianforte's campaign, accounts that investigators and prosecutors believed when they charged Gianforte with misdemeanor assault later that same night."

By the time Gianforte pleaded guilty court, he still had not been booked and processed as Gootkin's office did not arrest him even after he was caught lying Gootkin's investigators. 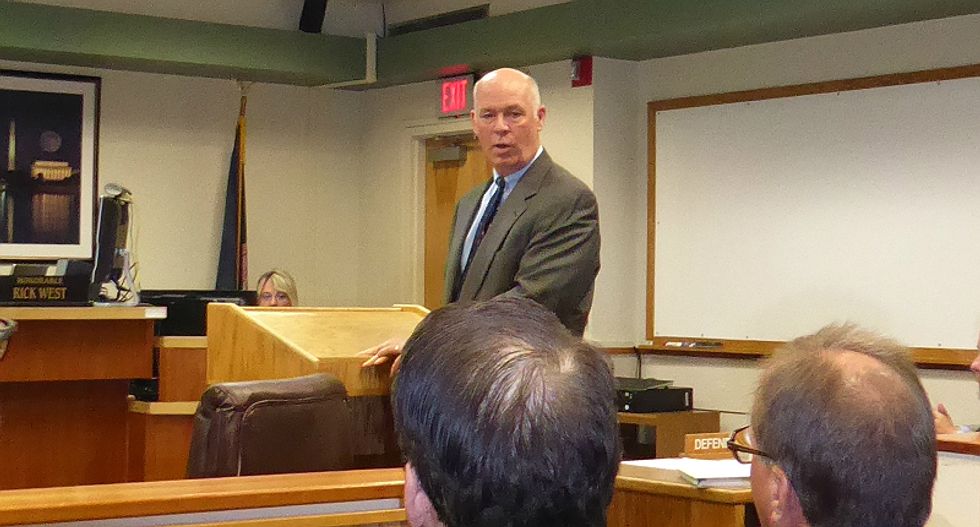 Gootkin's nomination must be confirmed by the Montana state Senate.

During a rally in Missoula during the 2018 midterms, Trump cheered Gianforte for his assault. "And by the way, never wrestle him," Trump cautioned. "You understand that? Never."

"Any guy that can do a body slam, he's my kind of--" Trump said, while imitating a body slam.