Holocaust expert: Putin’s claim to rid Ukraine of Nazis is especially absurd given its history

The Conversation
Russian Prime Minister Vladimir Putin adjusts his sunglasses (AFP)
Russian President Vladimir Putin justifies his war on Ukraine as a peacekeeping mission, a “denazification” of the country.

In his address to the Russian people on Feb. 24, 2022, Putin said the purpose was to “protect people” who had been “subjected to bullying and genocide … for the last eight years. And for this we will strive for the demilitarization and denazification of Ukraine.”

The victims of the genocide claimed by Putin are Russian speakers; the Nazis he referenced are the elected representatives of the Ukrainian people. While Ukraine’s new language laws have upset some minorities, independent news media have uncovered no evidence of genocide against Russian speakers. In fact, as the historian Timothy Snyder has pointed out, Russian speakers have more freedom in Ukraine than they have in Russia, where Putin’s authoritarian government routinely suppresses political dissent. And while far right groups have been growing in Ukraine, their electoral power is limited.

As the author of a recently published book on anti-Jewish violence in Ukraine and a historian of the Holocaust, I know why the accusations of Nazism and genocide have resonance in Ukraine. But I also understand that despite episodic violence, Ukrainian history offers a model of tolerance and democratic government.

First, it is worth pointing out that Ukraine today is a vibrant, pluralistic democracy. Ukrainian President Volodymyr Zelensky won a five-year term in the 2019 presidential election with a landslide majority, defeating 39 candidates. His Servant of the People party then swept the parliamentary elections in July 2019, winning 254 seats in the 450-seat chamber, becoming the first majority government in the history of the modern Ukrainian state. Zelensky was well-known as a comedian and star of the popular sitcom “Servant of the People,” from which his party’s name was derived. 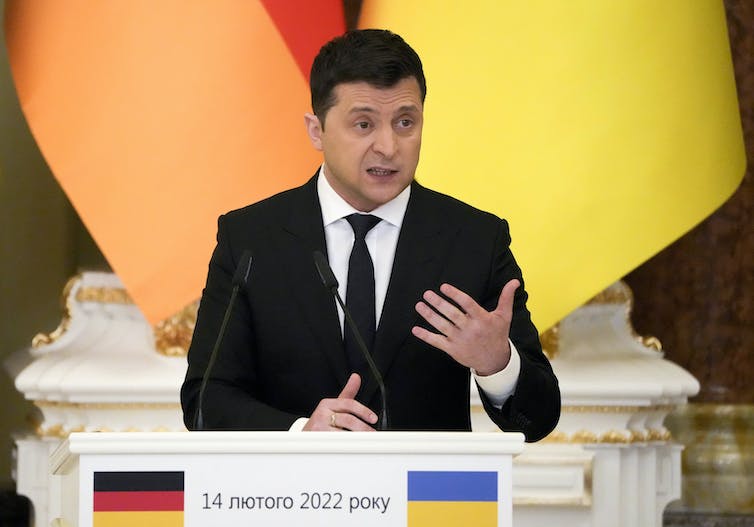 The fact that Zelensky is the grandson of a Holocaust survivor and was raised in what he told The Times of Israel was “an ordinary Soviet Jewish family” was barely noted during the election. “Nobody cares. Nobody asks about it,” he remarked in the same interview. Nor did Ukrainians seem to mind that the prime minister at the time of Zelensky’s election, Volodymyr Groysman, also had a Jewish background.

For a brief period of time, Ukraine was the only state outside of Israel to have both a Jewish head of state and a Jewish head of government. “How could I be a Nazi?” Zelensky asked in a public address after the Russian invasion began. “Explain it to my grandfather.”

The pogroms against Jews

Sporadic episodes of violence against Jews, or pogroms, began well before the Holocaust. In 1881, for instance, after the assassination of Tsar Alexander II, ordinary churchgoers, laborers, railway workers and soldiers attacked Jewish-owned shops, mills and canteens, resulting in the deaths of dozens of Jews in what was then considered the south of Russia, but is now Ukraine. During another wave of violence following the Revolution of 1905, workers, peasants and soldiers, egged on by Russian right-wing paramilitary groups, murdered 5,000 Jews in the region.

During the unrest that followed the Bolshevik Revolution of 1917, about 100,000 Jews died as a result of attacks perpetrated against them by soldiers fighting to restore a united Russia, as well as by the armies of the newly established Ukrainian and Polish states.

Finally, during the Second World War, German soldiers murdered 1.5 million Jews in the areas that are now Ukraine, often with the collaboration of Ukrainian militias established in the diaspora and with the help of local auxiliary police. The role of ethnic Ukrainians in the Holocaust remains contentious in Ukraine today, where nationalist heroes who collaborated with the Nazis continue to be honored. 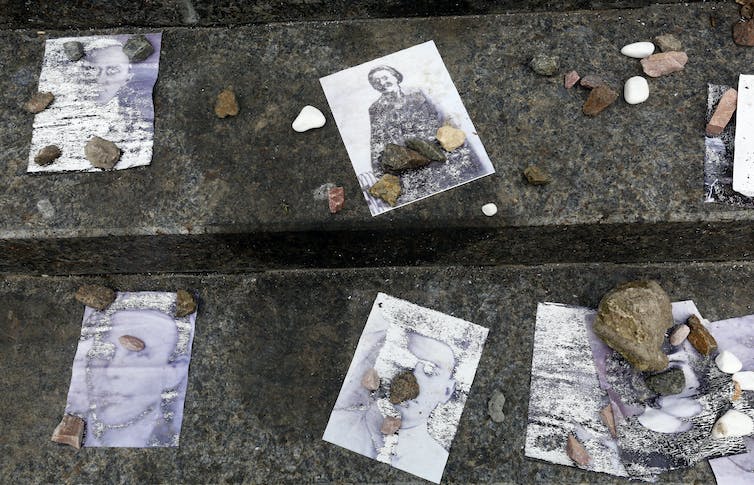 Small stones placed on the photos of victims of the 1941 massacre where the Nazi killed tens of thousands of Jews during WWII, in Kyiv, Ukraine.

Yet at the same time, millions of non-Jewish Ukrainians lost their lives under the Nazis or were exploited as slave laborers. The occupiers treated Ukrainian lands as little more than Lebensraum, living space for ethnic Germans.

Forgotten in this history is the period between 1917 and 1919 when an independent Ukrainian state offered a different model of multiculturalism and pluralism. The Ukrainian state that declared its independence from Russia in the aftermath of the 1917 Revolutions, envisioned a Ukraine for all ethnicities and religious groups living within its territory.

One of its first acts was passing the Law on National Autonomy in January 1918, which allowed each of the major ethnic minority groups – Russians, Jews, and Poles – broad autonomous rights, including the right to use their own language.

The cabinet included a Secretariat of National Affairs, with vice-secretariats for Russians, Jews and Poles, and, briefly in 1919, even a Ministry of Jewish Affairs. The legislative body, as well, included proportional representation from each of the national minorities. The state issued declarations and currency printed in four languages: Ukrainian, Russian, Polish and Yiddish.

However, this state, hailed by Jews around the world as a model for the new nation states then emerging in eastern and central Europe, never managed to hold the capital for more than a few months at a time. By April of 1919, the government was being run from a moving train and could barely claim more land than the tracks beneath it.

From its inauguration in January 1918, Ukraine found itself enmeshed in a bloody war on multiple fronts. The Soviet Red Army attacked it from the east, while Moscow sought to ignite Bolshevik revolutions throughout Ukraine. A Russian White Army led by officers from the old tsarist army attacked from the south, hoping to reestablish a version of the Russian Empire. From the west, the army of the newly established Polish Republic attacked with the goal of restoring historic Poland’s borders.

At the same time, a range of insurgent fighters and anarchists formed militias to seize land for themselves. In the midst of this chaos, the dream of a pluralistic state devolved into inter-ethnic violence.

In March 1921, the war ended with the Treaty of Riga, incorporating much of the territory claimed by the independent Ukrainian state into the Soviet Union.

Putin’s selective telling of the past exaggerates the legacy of Nazism in Ukraine while ignoring the state’s historic struggle for pluralism and democracy. There is a good reason for this: he fears democracy more than he fears Nazism.