The Conversation
French far-right party Rassemblement National's leader Marine Le Pen leaves Dzaoudzi Pamandzi International Airport during her visit to the French Indian Ocean island of Mayotte on December 16, 2021. © Ali Al-Daher, AFP
Far-right candidate Marine Le Pen may have missed out on the French presidency, falling 17 pecentage points short of incumbent Emmanuel Macron in a runoff held April 24, 2022. But to characterize her campaign as a total loss would be missing an essential point: with nearly 41.2% of the vote, a far-right contender came closer to securing the French presidency than at any point in the past.

She outperformed the previous two times that her party got through to the final round. In 2017, Le Pen received only 33.9% of the vote. Her father and predecessor as head of the Front National – now rebranded as Rassemblement National, or National Rally – won just 17.8% of the vote in the 2002 runoff.

The growth in support for France’s far right isn’t taking place in a vacuum. A wave of populist sentiment has swept across much of Europe and North America in the last few years. Moreover, the French and American far right have demonstrated a mutual admiration and exchange of strategies. The French right’s fight against “wokisme” echoes American conservative discourse around critical race theory. Similarly, the American right has drawn inspiration from French writer Renaud Camus’ white nationalist idea of a “grand remplacement,” which holds that white populations and culture are being replaced by non-white, non-Christian people.

But the results of the recent election show something beyond a general growth in support for the far right – something that is happening on both sides of the Atlantic. The French right is succeeding in one key demographic that the American right has seemingly failed to capture: youth voters.

Analysis of the presidential runoff shows that 49% of 25-34 year olds who voted opted for Le Pen – compared to just over 41% of the general population, and 29% of voters over 70.

This wasn’t always the case. Like in the United States, youth voters in France have historically supported progressive and left-leaning platforms. The Front National – which was established as an explicitly neo-fascist, anti-immigrant party, and whose founder Jean-Marie Le Pen has been repeatedly convicted by French courts for inciting racial hatred – was especially far from youth politics.

Indeed, until recently, the French far right’s relation to the under-30 crowd could be summarized in the words of punk rock group Bérurier Noir, which famously sang during a 1989 concert that “la jeunesse emmerde le Front National” – “young people piss off the Front National.”

This lyric became a rallying cry during the 2002 elections, as youth voters turned out in overwhelming numbers – both to the ballot box and to the streets in protest – when the far right advanced to the runoffs for the first time in the Front National’s history.

The tide began to change when Marine Le Pen took control of the Front National from her father in 2011. Over the last decade, she has undertaken a conscious process of “de-demonizing” the party in an effort to distance itself from its antisemitic past. Instead, Le Pen wants to present herself as a mainstream candidate.

While, as many point out, many of the policies of Rassemblement National aren’t substantively different from their far-right roots, the party has tried to appeal to young voters by reframing its stances on issues like the environment and feminism. Le Pen retreated from her previous climate skepticism and embraced a program of so-called nationalist ecology, which advocates for energy independence and French-made products. She also positioned herself as a pro-animal welfare candidate by calling for stricter regulations on the meatpacking industry, and claimed to “defend women” by campaigning against street harassment.

Critics note that her animal welfare proposals amounted to a ban on halal and kosher meat and that her rhetoric on street harassment placed the blame on immigrant men who, according to her campaign videos, either did not know or did not respect “French cultural codes.”

Beyond reframing, though, the Rassemblement National also proposed a number of concrete fiscal policies that target youth voters. In her 2022 presidential platform, Le Pen promised to eliminate taxes for those under 30, offer financial assistance to student workers and increase housing for students.

Le Pen and the Rassemblement National haven’t convinced everyone. It remains a primarily anti-immigrant, anti-European nationalist party that often faces accusations of Islamophobia, racism and homophobia.

When Le Pen advanced to the runoffs after the first round of voting on April 10 – barely edging out far-left candidate Jean-Luc Mélenchon – huge numbers of students turned out in protest across France, declaring that they would vote “neither Macron, nor Le Pen.” Many young voters in 2022 abstained from voting altogether – an estimated 30% of those under 35 years old in the first round, climbing to a historic 40% in the runoff.

In both France and the U.S., younger generations express feelings of disinterest in and neglect by mainstream political institutions.

Yet young people in the U.S. continue to show comparatively low levels of support for right-wing authoritarianism. In 2016 and 2020, voters age 18-29 were 10 points lower in their support for Donald Trump compared to the overall population.

So why aren’t we seeing the French trend in the U.S.?

It’s important to note that the U.S. Republican Party and the French Rassemblement National are not completely analogous, due at least in part to the fact that the U.S. is a two-party system. The Republican Party is the only viable option available to right-wing voters. In France, the Rassemblement National is one of several far-right movements, and is wholly separate from the mainstream conservative Les Républicains party.

Still, the GOP and the Rassemblement National are increasingly occupying the same political space. According to the University of Gothenburg’s V-Dem Institute, the Republican Party shifted dramatically towards illiberal rhetoric between 2002 and 2018, putting it in proximity to European far-right parties. Similarly, the GOP and the Rassemblement National received similar scores on Harvard University’s 2019 Global Party Survey in terms of opposition to ethnic minority rights and adherence to liberal democratic principles, norms and practices.

The GOP and the RN have also demonstrated a growing, mutual recognition and exchange of ideas over the last few years.

Indeed, over the last few weeks, far-right groups in France have even begun to echo U.S.-style “Stop the Steal” rhetoric in response to Emmanuel Macron’s vote shares.

Yet is seems unlikely that far-right segments of the Republican Party can replicate the metamorphosis that allowed Rassemblement National to appeal to youth voters.

Party structures in the U.S. are significantly more decentralized than in France. While Le Pen was able to lead the charge in “softening” her image, it’s not clear who would play that role in an American context for Republicans. Trump remains a polarizing figure within the party and seemingly shows no desire to engage in such “de-demonizing.” 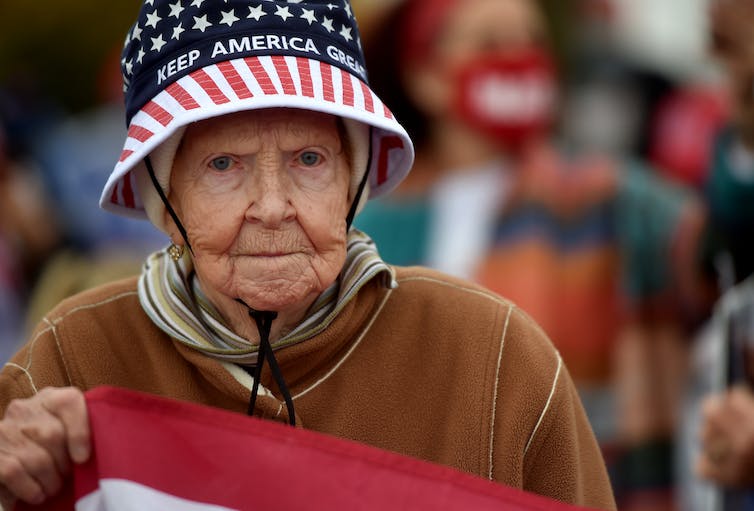 An age-old problem for the GOP?

And the GOP also doesn’t seem to have the political desire to “soften” its image in issues that matter most to youth voters.

A 2021 survey by the Harvard Kennedy School Institute of Politics found that young Americans list addressing climate change, health care, education, social justice and income inequality as their top priorities – several of which are difficult to reconcile with the “culture war” that parts of the GOP have made a core part of their mandates.

By and large, major Republican officials remain publicly skeptical that climate change exists, and vote against Democratic-led climate proposals as too expensive or unnecessary.

The Rassemblement National’s youth-oriented fiscal policies – which often involve direct financial assistance for students, in a distinct break from the party’s “Reaganomics” under Jean-Marie Le Pen in the 1980s – run counter to a GOP that opposes solutions to the student debt crisis.

The GOP seems to be keenly aware of its declining support among youth voters. Yet Republican efforts seem more geared toward tactics such as diluting the vote of districts with college campuses, particularly historically Black colleges and universities, and voter ID laws that would make it more difficult for young people to vote. In contrast, Le Pen openly courted youth voters and dedicated a large part of her final rally before the April 24 runoff to calling on young people to get out and vote.

Part of the GOP approach can likely be ascribed to the fact that young voters are becoming increasingly racially diverse and that young adults of color are an especially strong base for Democratic candidates. But GOP support is dropping among white youths, too.

It took years for Le Pen’s “de-demonization” among youth voters to start paying dividends – and even then, it was insufficient to propel her to electoral victory. The U.S. will, in a few months, undergo its own elections with the 2022 midterms. It’s far from certain that young people in the U.S. will continue to throw their support behind Democratic candidates. But who they cast their ballot for, and whether they turn out to vote at all, will show just how big the gap is between the Rassemblement National and the GOP in appealing to a younger electorate.