It was long thought these fossils came from an eagle. Turns out they belong to the only known vulture species from Australia

The Conversation
The extinct species may have been a relative of the living Griffon Vulture (pictured). Shutterstock

In 1905, a fragment of a fossil wing bone discovered near the Kalamurina Homestead, South Australia, was described as an extinct eagle and named Taphaetus lacertosus, meaning “powerful grave eagle”.

Now research published by myself and mycolleagues can reveal this species was no eagle at all. It was an “Old World” vulture, which we have renamed Cryptogyps lacertosus, or “powerful hidden vulture”.

This is the first time one of these scavenging raptors has been found to have lived in Australia. Living more than tens of thousands of years ago, we believe Cryptogyps likely died out with ancient Australia’s megafauna. There’s much about the species we’ve yet to find out. 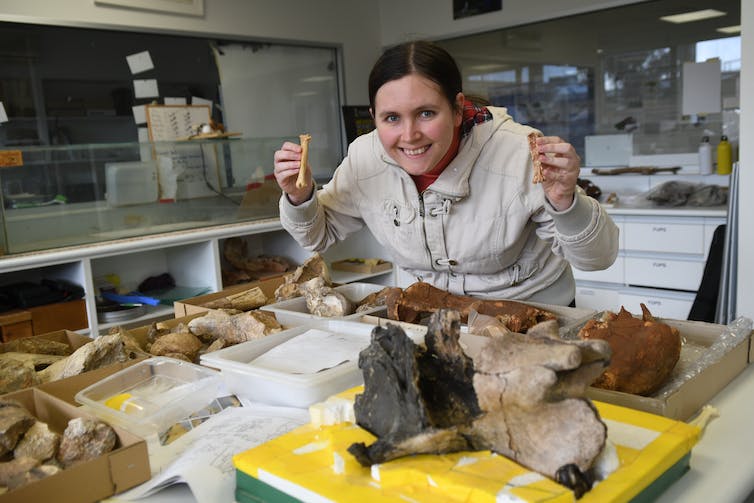 Here’s me at the Flinders University palaeontology lab, holding the fossil vulture tarsus (left) and a tarsus of a living vulture species (right).

Vultures are birds of prey that feed almost exclusively on decaying flesh. They play a vital role in their ecosystems by speeding up the consumption of carcasses. In this way, they assist in redistributing nutrients, and help limit the spread of diseases.

Considering they’re so widespread today, it’s surprising vultures long appeared absent from Australia. It’s even stranger when you look at the fossil record across South-East Asia, where vulture fossils have been found as far south as the Indonesian island of Flores. Surely they could have flown a little further?

What’s more, the Australian environment would have been well-suited to support vultures until about 50,000 years ago. Back then, megafaunal marsupials were widespread and abundant across the continent, and would have provided plentiful carcasses for scavengers.

The shape of a scavenger

We aren’t the first to consider there might be vultures in Australia’s fossil record. Other palaeontologists have previously suggested some Australian bird fossils could belong to vultures, and the Kalamurina “eagle” was one such example.

My colleagues and I wanted to find out if this really was the case, and so we began comparing the fossil bones of Cryptogyps to a wide range of living birds of prey, including vultures.

Being scavengers, vultures have a very different musculature and bone structure to eagles. This fact proved to be crucial in confirming Cryptogyps lacertosus was indeed a vulture. 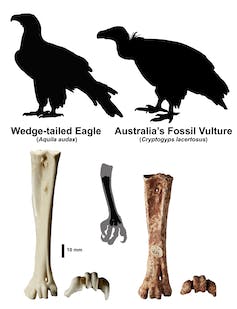 The material used in our research included the original wing bone from the Kalamurina Homestead, two identical wing bone fragments from the Wellington Caves in New South Wales, and two “tarsi” (lower leg bones) – one from Wellington Caves and the other from Leaena’s Breath Cave in Western Australia. All of these bones are thought to belong to Cryptogyps.

Close examination of the bones, and comparison to eagles and vultures from around the world revealed their muscle scars and structure are more vulture-like than eagle-like, especially for the tarsi. This strongly indicates they belonged to a scavenger.

To further test this, we placed the fossils in an evolutionary tree with other birds of prey. Our results confirmed what the comparison suggested: Cryptogyps was indeed a vulture, and potentially a close relative of the Griffon Vulture found across Europe and Asia.

The life and death of a species

Based on the leg bones, we can infer Cryptogyps didn’t actively hunt and grab prey with powerful talons. Rather, it would have scavenged dead animals as vultures do now.

At this point in time, we don’t have enough of the skeleton to know exactly what Cryptogyps lacertosus looked like, or what it ate.

It could have been a social species, gathering in large flocks around the corpses of megafauna such as Diprotodon or Protemnodon. Or perhaps it was a solitary bird, searching and feeding alone, or in pairs. It may have fed on the soft insides of the body, or may have preferred the tougher muscle and skin.

Gaining this information will require more discoveries in the future. What isn’t in question, however, is that like all vultures today Cryptogyps lacertosus would have played an important role in ecosystem health.

Fossils of Cryptogyps are believed to date from the Middle to Late Pleistocene, somewhere between 770,000 and 40,000 years ago. Its extinction was very likely related to the demise of Australia’s megafauna around 60,000–40,000 years ago.

As large-bodied animals died off, the supply of carcasses scavengers need to survive would have dwindled significantly. Starvation would have become common, breeding attempts less successful and eventually the total population would have fallen below the threshold needed to survive. 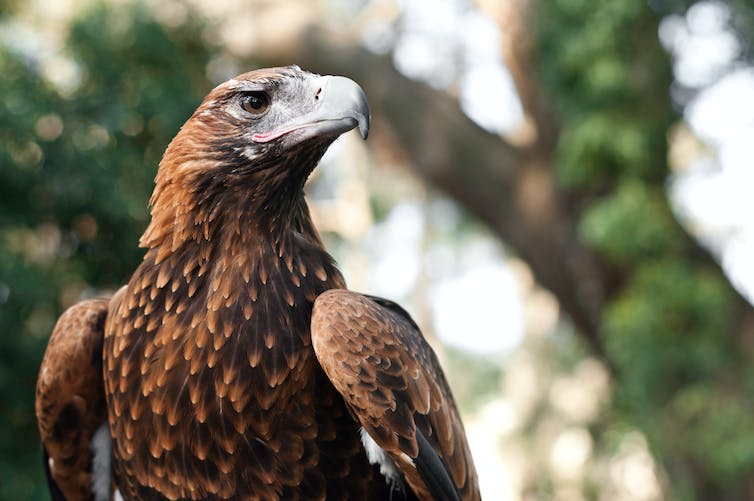 The Wedge-tailed Eagle is the largest bird of prey in Australia today. Shutterstock

Australia has the sobering distinction of being the only continent to lose its vultures entirely. Sadly, around half of all living vultures today are endangered and under threat of extinction.

And the consequences of this decline have been dire, including increased disease transmission in both animal and human populations, potential impacts on the nutrient cycle, and the restructuring of ecosystems.