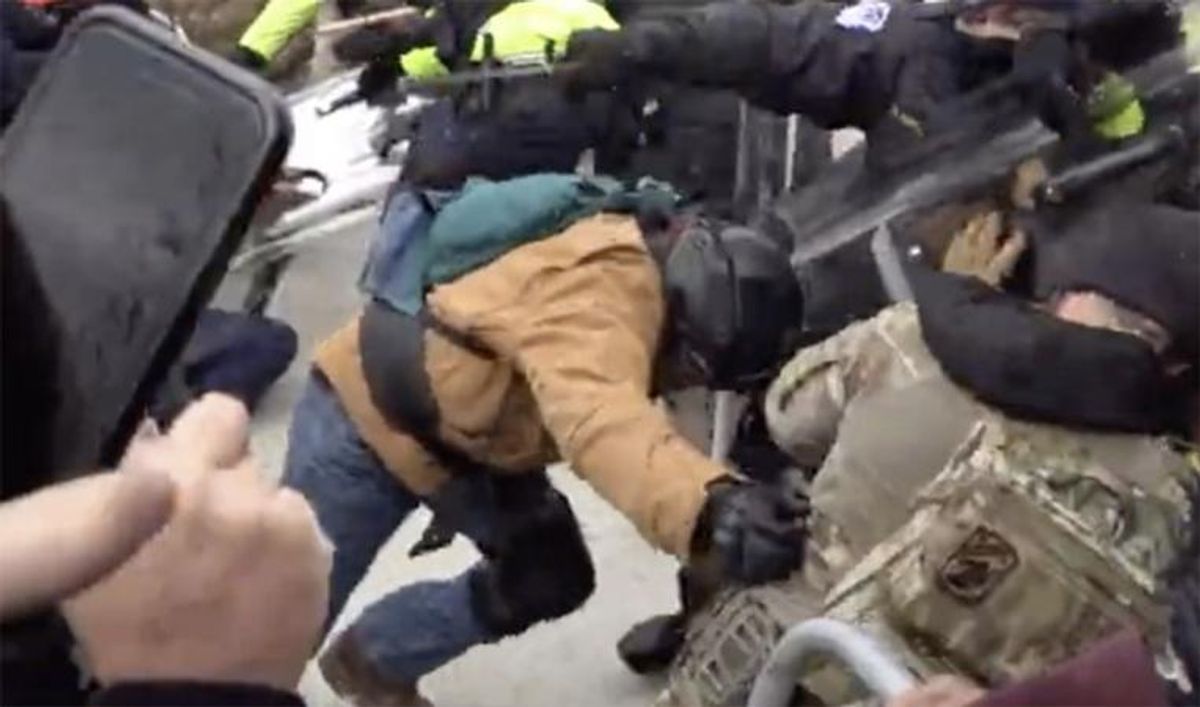 In a deep Politico dive into what motivated one of the many right-wing extremists who showed up at the nation's Capitol on Jan 6th to hear Donald Trump speak before storming the halls of Congress to stop the certification of the 2020 election, friends and family of a Colorado geophysicist who was filmed assaulting a police officer struggled to explain his actions that day.

Currently 51-year-old Jeffrey Sabol of Kittredge, Colorado is being held by authorities for his part in the insurrection after he was identified in a video pulling a Capitol cop down some stairs from behind.

Friends and associates were stunned after seeing video of his actions, with one, John Bergman admitting, "I've always revered Jeff as one of the most intelligent, capable, thoughtful, helping people. We had just spoken a few weeks earlier, and next thing I know he's in Washington, D.C., doing this crazy thing."

You can see a clip below with Sabol wearing the distinctive brown Carhartt jacket:

According to Politico's Melania Warner, Sabol was known to grow extremely angry at times, but was also known as a man who would literally give a stranger the shirt of his back and he did one time during a hike.

After noting that Sabol is currently facing eight criminal counts -- several of them felonies -- Warner writes that the geophysicist immediately regretted his action, attempting to commit suicide and imploring his friends to destroy any evidence that he has participated in the violence that day.

"Unlike defendants who posted about their Capitol exploits on social media, Sabol immediately seemed to have grasped the gravity of his post-January 6 predicament. Back home in Colorado, he destroyed several electronic devices in his microwave and instructed friends to delete anything he had sent them, according to Sabol's own statements to investigators< Warner wrote. "Several days later, he arrived at Logan Airport in Boston with a ticket to Zurich, Switzerland. Worried he had been recognized, he never got on the plane. Instead, he rented a car and drove to New York state, eventually ending up in a suburb of New York City. At some point along the way, he tossed his phone off a bridge and grew so distraught that he attempted to take his own life by slashing his wrists and thighs, his criminal complaint states."

According to a letter -- one of many -- sent to the court when he was accused of a misdemeanor child abuse case in 2016, a former teacher who knew him through volunteer work wrote, "We discussed all kinds of topics—parenting, religion, politics, relationships, work, hobbies, and life experiences. Never once did I detect any indication of him being a fanatic of any sort. I can't conceive of him being a danger to the community in any way."

Trying to get a handle on what pushed Sabol over the edge proved difficult for Politico's Warner who wrote, "Exactly how Sabol went from Colorado geophysicist to Capitol insurrectionist, and who or what influenced him, is hard to say, and for a reason: Sabol's attorney, Jon Norris, who declined to comment for this article and did not respond to a list of specific questions, instructed Sabol's friends and family members who wrote character letters not to speak, either. During an April hearing devoted to a motion to release Sabol from jail, Norris appeared intent on keeping his client's political motives an enigma."

According to his former wife, Shari Strotz, his radicalization -- at least vocally -- took on an ominous edge when Barack Obama was elected president.

Over the past decade, several parts of Sabol's life unraveled, according to interviews and court records. In 2011, Strotz filed for divorce. In an interview, she said Sabol began drinking heavily and acting 'strange," " the report states with the Politico reporting, "By this point, Sabol's strong political views were already well established. According to Strotz, they took root after Barack Obama was elected president in 2008. She denies race had anything to do with it."

"It was Obama as a person. He would freak out. He hated that Obama became president, and he hated Democrats. He became obsessed," Strotz recalled with a friend confirming the Colorado man put a "Don't Tread on Me Sticker" on his truck to go with an American flag he also added.

Sabol's radicalization continued into 2020 as he worked on government contracts and complained about the "military-industrial complex" and how "corrupt it was according to an associate.

That was when he reportedly became enamored with Trump's claim the election had been stolen from him.

According to friend Bergman who admits he was personally appalled by Trump's claims, "Jeff has always cared very deeply about his country. He's the kind of guy if he felt something was wrong, he'd want to try and change it. The way I look at it is, how could you fall for that guy?"

Another friend, Todd Kerbs, has his own theory that Sabol has a psychological break.

"He fell off the edge for about a minute. But I know for a 1,000 percent fact that he didn't go there with any ill intentions. He just wanted to observe and see what was going on," he offered.

Sabol's landlord, Sarah Troster, had nothing but nice things to say about her tenant and served up her own observation.

"I see this as Trump's fault. He got so many people to believe in his nonsense," she stated.

You can read more of Warner's in-depth profile here.