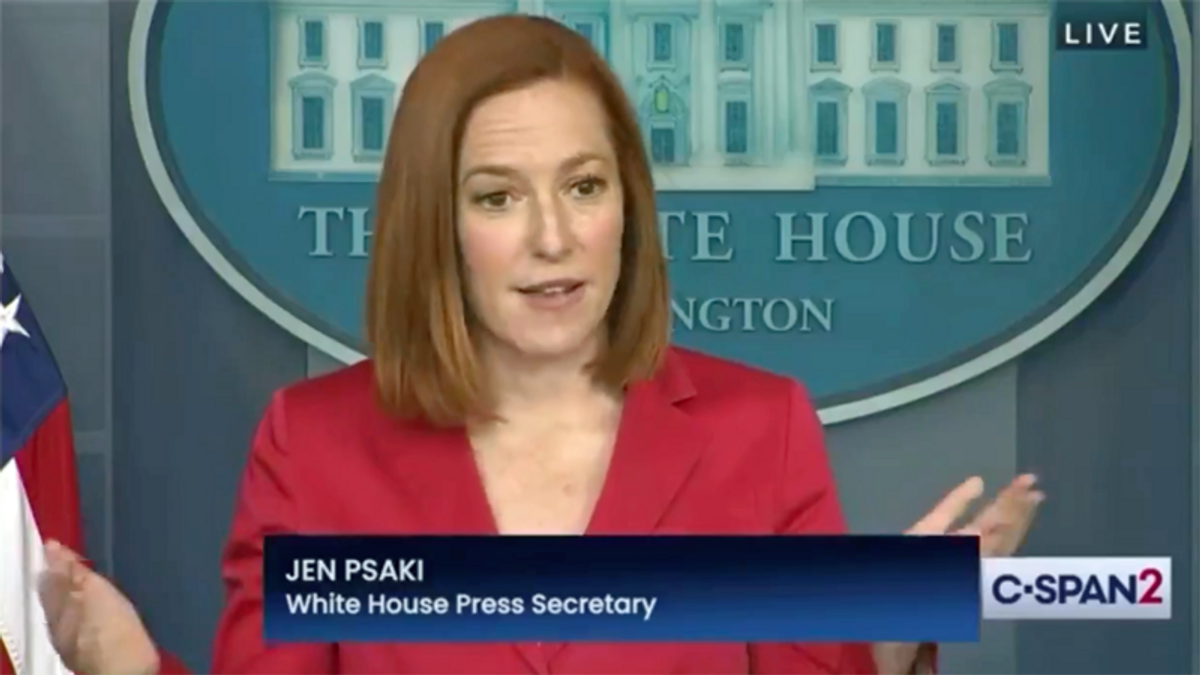 White House press secretary Jen Psaki was praised on Friday for the calm way she debunked the premise of a question from the far-right cable network Newsmax.

"The White House faced fresh accusations of a clandestine propaganda campaign yesterday after it emerged it granted regular access to a rightwing blogger with a habit of asking President Bush easy questions. Jeff Gannon, who represented a rightwing site owned by a Texas-based Republican activist, had been a regular at White House briefings since 2003 but aroused reporters' suspicions after posing ideologically loaded questions," The Guardian reported in February of 2005.

"The fake White House correspondent quit his job at the Talon News site on Wednesday after liberal bloggers found he had been operating under a pseudonym, and that he was linked to several gay pornographic web domain addresses under his real idenity, James Guckert," The Guardian explained. "Subsequent inquiries by liberal bloggers uncovered Gannon's links to gay porn domain addresses under his real name, and a posted photograph of a man posing in his underwear with his initials. The exposure prompted Gannon to resign his job at Talon, although he has shown no remorse about his conduct at the White House."

In December, NPR's Steve Inskeep asked Psaki how she would deal with far-right activists in the briefing room.

"How do you think you will engage the right-wing media ecosystem, if I can call it that?" Inskeep asked. "I'm thinking of networks like Fox, but also OANN and Newsmax that have larger and larger audiences."

Psaki replied she will, "rely on my experience at the State Department, there were many, many days where there were journalists — I'm air quoting that — who are from Russia or China, essentially arms of the government, you know, arms of the state-run media. And we let them in the briefing room, and they ask questions, and sometimes I had a little fun with them, you know, about who they were asking the question on behalf of."

"In terms of, you know, [OANN] and kind of other right-wing entities? I don't think my job as the White House press secretary is to give them a bigger platform. But at the same time, when we're at a point when it's COVID-safe and there is a full briefing room, I also don't think it's my job to keep people out," she explained.

This approach was on display on Friday when Psaki out-witted Newsmax personality Emerald Robinson.

"You've heard that a lot in the media," Robinson replied.

"Who in the media," Psaki repeated.

Here's some of what people were saying about the exchange:

@Acyn What I love about Press Secretary Jen Psaki is that she combats lies with facts and sass. She fights back aga… https://t.co/M2zdIRZr7O
— Russell Drew (@Russell Drew)1620413204.0

Reporter got rattled... she started by saying that this was a pseudo Obama administration but got body bagged when she couldn't cite who said it then switched to why isnt Biden greeting foreign leaders? AWFUL turn at the table
— Michael (@Michael53430896) May 7, 2021

Many people are saying that Emerald Robinson isn't an actual reporter and that Newsmax is a tabloid.
— Cat Food Casserole (@CasseroleFood) May 7, 2021

Please pay or give @jrpsaki absolutely anything she wants on the condition she remains @PressSec I fear that nobody will ever be cool enough to fill her shoes.

She's a master class in public communications every time she speaks. It's such a pleasure watching her work.
— Meta Beth. Things will get better. 💭🎗🍿🐝 (@professorsan) May 7, 2021

Many people are saying Newmax is run by a large Dalmatian in a floral muumuu and rollerblades - care to comment on that?
— Jaynie's Got a Bun (@FreeGirlNowNYC) May 7, 2021

"A lot of people are saying" ‼️

For years of programming by a cult leader has totally scrambled the brains of folks in the media. They've adopted his language and his tactics, for everyday interactions ‼️🙄
— Cruz Thomas 🇺🇸 🌎 🐶🌄 (@realCruzThomas) May 7, 2021

She never gets goaded into an argument. Love that about her.
— Vote for a Bluer Senate 💙 (@MarVistaWriter) May 7, 2021