Buying off fascist voters : What Josh Hawley is teaching us 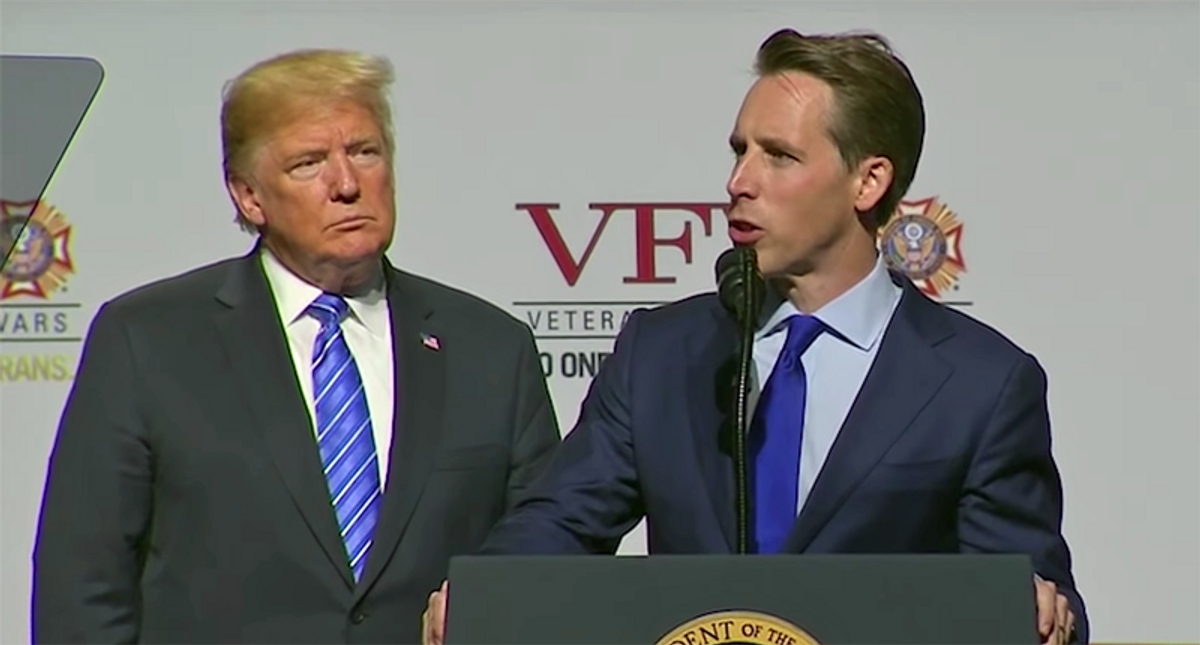 Josh Hawley is the junior US senator from Missouri. He made news this morning, saying he'd help the president in his attempt to stay in power by objecting to the certification of electors on Jan. 6. That means the US Senate will debate the merits of the allegations, which are nil, before voting to approve the Electoral College vote.

Hawley is expected to be one of the leading GOP candidates in the 2024 election. The conventional wisdom says he's doing this to get as much attention as he can from Donald Trump's loyalest supporters. While I'm usually skeptical of the conventional wisdom, I think it's right this time. Hawley isn't going to the wall for Trump. In the end, he'll vote to approve Joe Biden's victory. This is sound and fury, but also nothing.

What's interesting, I think, is Hawley's opposition to Mitch McConnell—or at least the appearance of opposition. The Senate majority leader does not want to go through this song and dance, but instead get on with the business of sabotaging the new president's administration. McConnell knows Hawley's gambit will fail, and fears failing to stop what the president is calling a stolen election might harm Kelly Loeffler's and David Perdue's reelection prospects, which will determine which party controls the Senate.

Hawley opposes, or at least appears to oppose, McConnell is another way. The top congressional Republican does not support giving each American $2,000 per month in covid-related economic relief, because Americans who are suffering are more likely to blame the guy in charge, which is to say Joe Biden, than they are the Republican Party. McConnell did the same thing to Barack Obama. When the former president asked the Republicans for help rebuilding America in the wake of the 2007-2008 financial panic, McConnell said his first priority was making sure Obama was a one-term president.

Hawley, however, does support the House bill appropriating $2,000 per person. And he's not alone. Loeffler and Perdue, who are fighting for their lives in next month's runoffs in Georgia, also support the expenditure. So does Marco Rubio, who's likely to be competing with Hawley in 2024. So what we have here is evidence of the incentive for Republicans to use the government to help Americans who are suffering. One in five people, according to one estimate, don't have enough money to buy enough food. This tack is very different, as I said, from McConnell's preferred tactic, which is to allow widespread suffering if and when suffering lends itself to achieving Republican goals.

But not just any American. Only a fool would believe Hawley and the others care about every one of us. Only a fool would believe they are genuinely concerned about political inequality and its erosion of liberal democracy, freedom and self-government. No, what we're seeing is the Republicans, or some Republicans gesturing broadly, who are sloughing off the old plutocratic ways and embracing a kind of conservative socialism, which is say, the exclusive sort akin to the compromises of the New Deal, in which the government took the side of the common man as long as the common man was white.

Appearances, however, can be deceiving. Trump was also good at appearing to side with the (white) common man before doing pretty much everything in his power to help the very obscenely rich become even more very obscenely rich. That said, he did prove something useful to ambitious Republicans like Josh Hawley: money talks. Specifically, direct cash payments talk. The president hurt farmers with his absurd trade war with China, but offset the pain by funneling billions in subsidies their way. In the past, a Republican might have drawn fire from his party for being so openly profligate. Trump, however, proved fiscal conservatism was a lie. It can be set aside when it's convenient to. Meanwhile, he gave the GOP whatever it wanted (tax cuts, judges, deregulation, etc.). Hawley and McConnell might not be antipodes after all.

Ironically, I think, it's Hawley who's proving something—to the Democrats. The lesson is that fascist GOP voters are, far from being opposed to the federal government's "intervention" into the economy and their personal lives, increasingly open to the idea. As I said, one in five people aren't getting enough to eat, according to one estimate. That's about 50 million Americans, a number that no doubt includes a whole lot of Trump voters. Fascist voters get hungry, too, perhaps so hungry they'd even tolerate liberal democracy empowering Americans they don't like as long as they get a cut.

Which is why McConnell seems poised to lose after he wins. He's winning now. He's blocking, at the behest of his conference, the House bill appropriating $2,000 per person. But I suspect he's going to lose later. Biden has said the last round of economic stimulus was a "down payment." He expects more relief next year. Forty-four House Republicans favor it. Hawley et al. do, too. By the time of Biden's inauguration, the pandemic's death toll could be 5,000 a day. All things being equal, the momentum could be in his favor. If so, Biden and his Democratic Party will get most of the credit, and in the process, they will have bought off many of Donald Trump's fascist voters.

All the better for democracy.