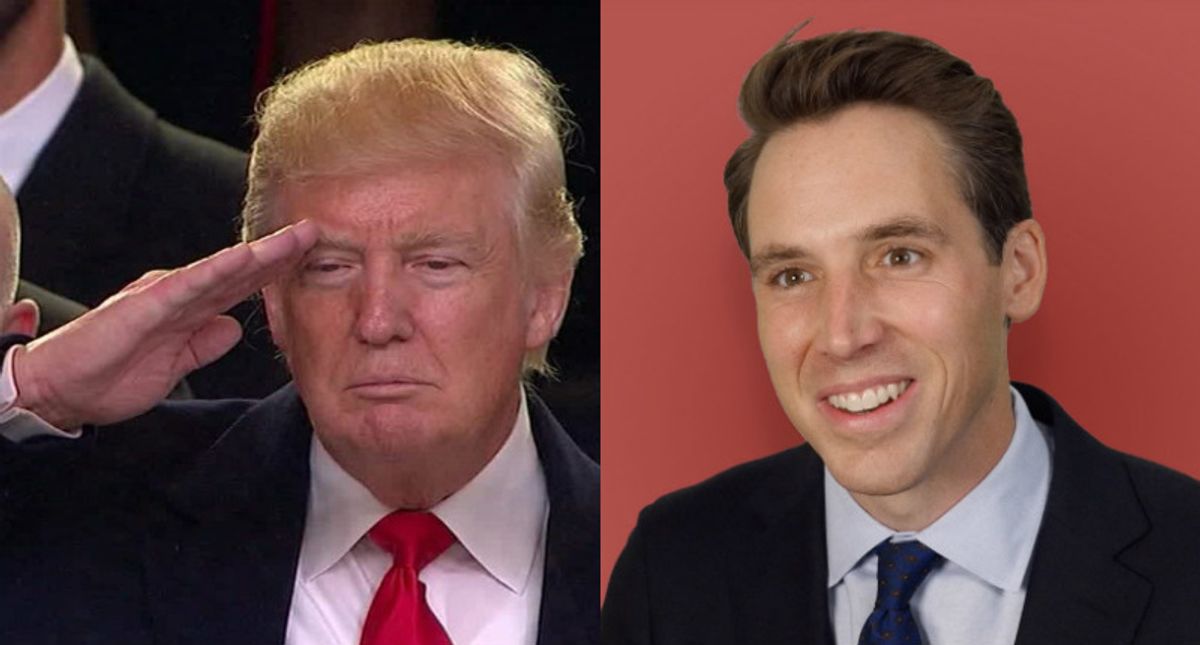 Sen. Josh Hawley (R-MO) is taking up the attempt to overthrow the 2020 election from the U.S. Senate while Rep. Mo Brooks (R-AL) plans to do it in the House. Yale historian and expert on authoritarianism, Timothy Snyder, explained on MSNBC Wednesday that it wouldn't be hyperbolic to call it an attempted coup d'etat. He also noted that Hawley's attempts are an attack on people of color.

Snyder, who literally wrote the book on tyranny, explained that the worst part about Hawley and his ilk is that it's a "big lie" and that they all know it.

"Senator Hawley knows that the claims he's making are not true," Snyder told Mehdi Hasan, who was filling in for Chris Hayes. "He knows that he is, in effect, endorsing a conspiracy theory. He knows that what he's doing is endorsing a story in which Mr. Trump is the victim. Mr. Trump has been stabbed in the back, and from the point of view of American history and American voters, the sad -- the tragic thing about this is that the real victims in the history of American voters are the people whose votes are not counted -- African Americans, historically."

According to President Donald Trump, it's the "cities" and "urban" areas that "stole" the election. What that's code for is Black people. Many Trump allies have shown county maps that went blue, lamenting that it shouldn't be possible that so few counties went for Biden, yet he won the presidency. What they neglect to understand is that the population has shifted significantly over the past several decades and rural areas are dying. There just isn't the population there that once was.

"So, what Nr. Hawley is doing, and that is what is shameful about it for him, I think as a young man, as a white man, it's shameful to stand up there and endorse the claim that Black people voting is fraud," Snyder said. "But in addition to the moral shame of it, there is the political consequences. When you make claims like this, you're basically saying, 'The other side has cheated, and so we're going have to cheat the next time around.'"

Hasan asked about the allegations that these attempts by the GOP could be considered an attempted coup d'etat. Technically, the only way it could be a coup d'etat is if Biden was already in power. But, Snyder said that it wasn't hyperbole.

"I think there is no problem at all calling this a coup or a self-coup or an attempted coup," Snyder explained. "The only thing which is a little bit different about this, historically speaking, is how much of it Mr. Trump broadcast in advance. He spent six or seven months before November telling us how he would try to throw the election after November, and he did basically all the things he said he was going to do. I mean, for people who think the military has to be involved, it's not for lack of trying."