Addressing a much smaller crowd than the thousands of Trump supporters who streamed to the US Capitol on Jan. 6, Matt Braynard, the little-known political consultant behind the "Justice for J6" rally, deflected against far-right detractors whose warnings about federal entrapment likely dampened turnout for the event.

"This is what terrifies them — a peaceful assembly of the America First right," Braynard thundered.

Just after the event concluded around 1:15 p.m., police in riot gear, including officers from the Alexandria Police Department equipped with assault-style rifles, moved into place in front of the Capitol Reflecting Pool.

Braynard and other speakers repeatedly disavowed the most extreme violence of the Capitol assault, while attempting to repackage the attempted insurrection as a respectable political movement.

Murmurs from the crowd — "they're all useless" in reference to elected officials, "do your jobs" and "communists" directed at the assembled media — showed Braynard's appeal for political engagement over extremism was received with skepticism.

"This is the beginning of the America First right taking over community organizing in this country," Braynard said, making an appeal for volunteers for his organization Look Ahead America.

His attempt to frame support for the insurrectionists as a nonpartisan issue also hit a snag: During a slide show intended to support his argument that the Jan. 6 defendants have received disparate treatment in the US court system, Braynard tried to shush supporters when they booed Rep. Alexandria Ocasio-Cortez (D-NY) and cheered for Jacob Chansley, the so-called "QAnon Shaman."

With Braynard discouraging signs and clothing promoting Trump — no "Make America Great Again" flags — rally attendees displayed mostly American flags and an occasional Three Percenter militia flag. One man wore a custom-made neon green T-shirt that said "China Joe Biden, Traitor-in-Chief" on the front and "Dems+Media, Dangerous to Freedom" on the back. Another man wore a T-shirt that refashioned the FBI's acronym as "Federal Bureau of Insurrections" and hat displaying the outline of an AR-15 and the words "Pedophile Hunter."

The restraint on overt displays of support for Trump allowed critics of the rally to infiltrate the designated site.

Eric Lamar of Washington, DC walked in front of a scrum of journalists with a handwritten sign reading, "Support our police," as they were snapping shots of volunteers before the start of the event.

"I'm here supporting the Capitol Police who were brutally attacked," he said. "The people who attacked the Capitol are domestic terrorists. I define terrorism as knowingly entering an area under attack. When you see people viciously attacking police, hitting them with batons and spears and spraying them with bear mace — you are engaging in a violent attack. You can't come back and say you didn't know what you were getting into."

Between the speakers' repeatedly disavowals of violence and claims that the Jan. 6 defendants are being treated differently than other people in the United States who experience the criminal justice system, it was hard to pinpoint their specific grievance.

A woman named "Kelly," who was introduced as the girlfriend of Jonathan Mellis, said her significant other is being held in solitary confinement in the DC jail. Mellis is accused of striking officers at the US Capitol with a stick on Jan. 6, and deliberately aiming for the unprotected area of their necks between their helmets and body armor.

"Last night for dinner they were served four pieces of white bread, a cookie and a packet of tartar sauce," Kelly said. "According to them, that's a nutritious meal, and they've violated their own rulebook on multiple occasions, and so I think America needs to become very well-versed in the treatment of these men. It's human rights that we're talking about, and it's completely nonpartisan."

Braynard disavowed the conduct at the rally without mentioning Mellis or any other defendants accused of violent crimes by name.

Cara Castronuova, the co-host of the rally, introduced Jeff Zink as "the father of one of the political detainees." Contrary to Castronuova's description, Jeff Zink's son, Ryan Zink, was released from jail in mid-March, less than six weeks after his arrest.

Zink filmed himself inside the Capitol, and allegedly told a friend in a private Facebook message: "Broke down the doors pushed Congress out of session I took two flash bangs I'm ok I'll be posting pictures in a little bit when we get back I'm hurt but we accomplished the job."

"And I can't imagine," Castronuova said, "what it would feel like to be a parent, and have a child in prison right now being held in solitary confinement with no bail thinking that he brought this kid up in America where there's a Constitution and there's due process, and now your son or your daughter is being held in prison with no bail indefinitely."

Zink said despite the fact that he was with his son the entire time on Jan. 6, the FBI cleared him of wrongdoing after interviewing him for an hour and a half. When the FBI came to speak to his son, the elder Zink said, he "had his door kicked in by 15 FBI agents, flash-banged him and his dog, and put him on the floor in handcuffs and dragged him out of his house."

The affidavit supporting Ryan Zink's arrest alleges that in a Facebook comment made the day after the assault on the Capitol, he said, "They are trying to charge us with sedition they will have to kill me I'm not coming quietly."

Rep. Ralph Norman (R-SC), the one member of Congress announced as a speaker for the rally, did not show up.

Joe Kent, a retired Army Ranger and Special Forces member who is challenging Rep. Jaime Herrera Beutler (R-Wash.), was one of two congressional candidates who spoke.

Kent's speech highlighted a sense of solidarity with other veterans, who are overrepresented among the Jan. 6 defendants, and grievance against elected officials who sent them to war in Afghanistan and Iraq.

"When I was serving this country, the thing that I had in common with those I went to war with is we're all Americans," Kent said. "Our political leaders, they didn't think twice about sending us off on useless, endless wars that were of no gain. But all of us joined, all of us fought, many of us died, many of still carry the scars from war for one reason: We believe in this country. We believe in that flag. We believe in everything that it stands for. And when there is an injustice done to any of our brothers and sisters, our fellow citizens, when their constitutional rights are taken, if we do not speak out against that, we are guilty of standing by and watching those rights erode."

Braynard tried to make the case that those who went inside the Capitol on Jan. 6 — which he called "stupid" — are being treated differently than liberal activists who committed civil disobedience to disrupt the Senate hearings to Brett Kavanaugh to the US Supreme Court.

"They stormed the hearings, they were arrested, bailed out, and went back into the same thing that day, over and over again," as a photo of Medea Benjamin of Code Pink was displayed on a large screen.

Benjamin was in the crowd on Saturday about 25 feet away from the podium where Braynard was speaking.

Benjamin told Raw Story that when she witnessed the assault on the Capitol on Jan. 6 she couldn't believe that hundreds of people were not arrested that day.

"For them to hold a rally and say that those people are political prisoners and they shouldn't face the consequences for what they did is totally wrong," she said. "I've been protesting in this Capitol for 20 years, and if I go in and hold a sign I'll get arrested. I have been to jail many, many times, and I understand when I am strong in my beliefs and I take an action, I have to be responsible for that. And these people were violent, they attacked police officers, they destroyed government property. They attempted treason. They have to pay the consequences." 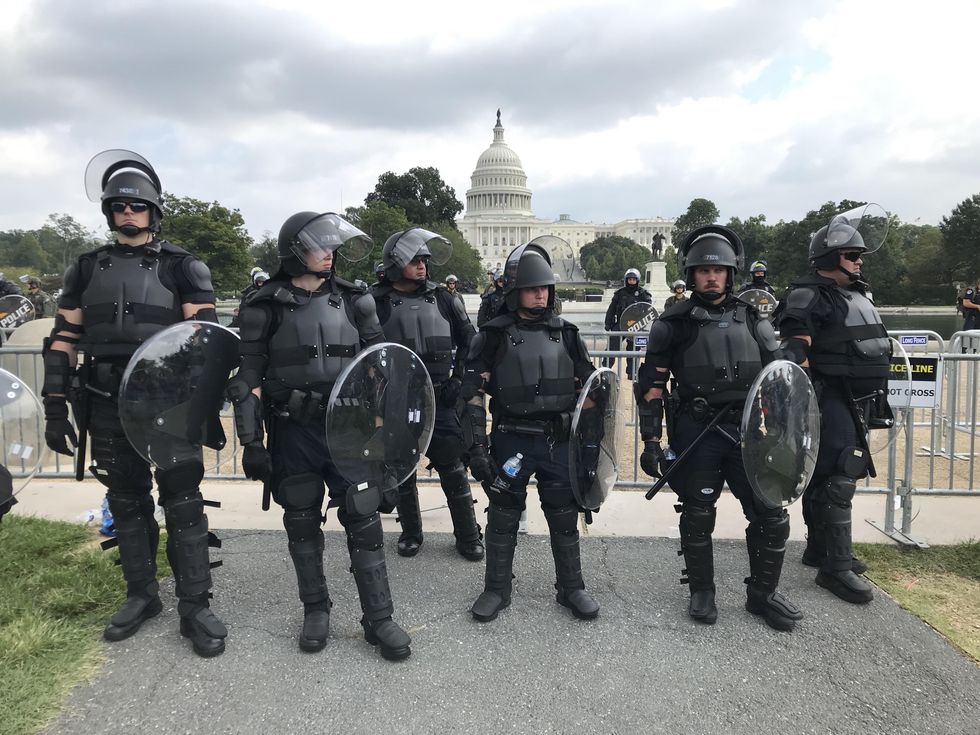