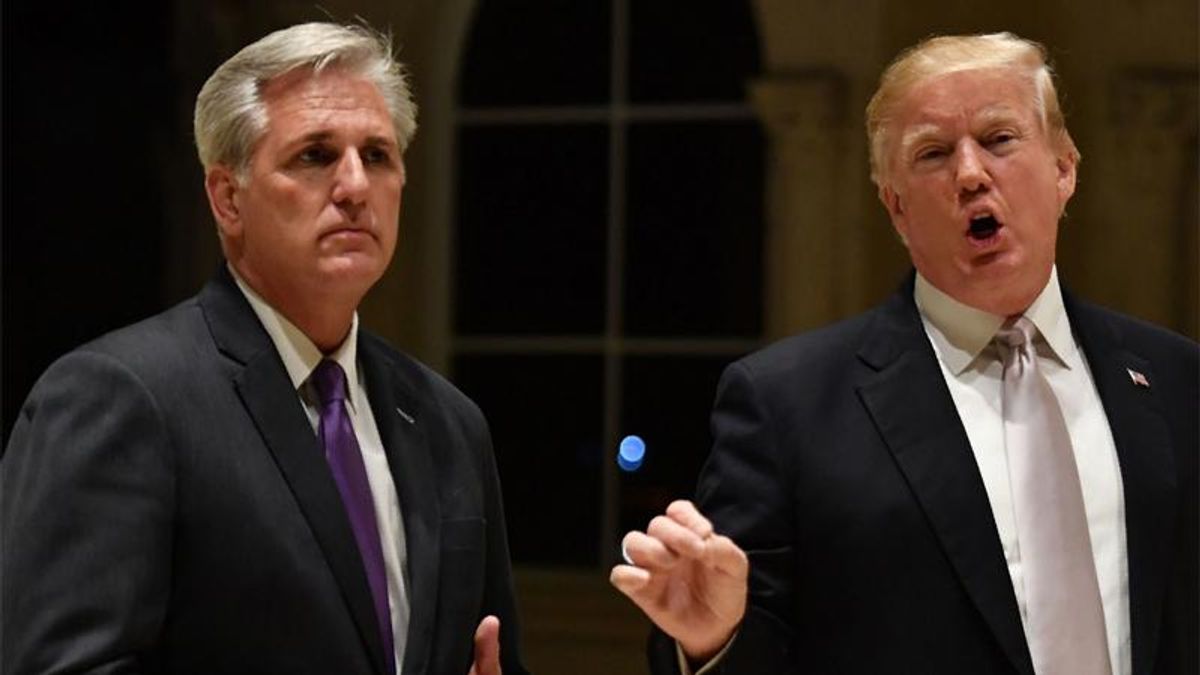 With Axios reporting that House Minority Leader Kevin McCarthy (R-CA) is walking a tightrope between pro-Trump House members and those who wish the former president would just go away, now Politico is adding some Republicans are rolling their eyes watching the GOP leader trying to stay on Trump's good side.

That has McCarthy's aides unhappy when they are trying to help the GOP leader get his caucus in line at a time when the Republican Party has lost both chambers of Congress and the White House.

McCarthy is already facing criticism for claiming that "everyone" in the country bears some responsibility for the storming of the U.S. Capitol, and some of that criticism is coming from his own members who are accusing him of still currying Trump's approval by diminishing his blame for inciting the riot.

According to Politico, following the right-wing extremist attack on the floor of Congress McCarthy angered Trump by saying the now ex-president bore some responsibility for the chaos that ensued leaving five dead.

Since that time, the GOP leader has softened his stance on Trump's culpability and has tried to spread the blame around.

That has some House Republicans irate at the same time they are seeing their campaign contributions dry up as longtime donors shut off the spigot of dollars in reaction to the events on Jan. 6th.

While Mccarthy seems to have Trump back on his side, he also finds himself being smacked around like a pinata by members who think he's only looking out for himself.

"McCarthy knows he needs to create some distance between his moderates and Trump if he wants to reclaim the House and achieve his dream of securing the speaker's gavel. And then there's McCarthy's other challenge of repairing the GOP's image with political donors and the corporate world, which has frozen PAC dollars to Republicans, such as McCarthy, who challenged the election results," Politico reports.

As for his overtures to Trump while placating his caucus, one GOP House member expressed disgust.

"This is vintage Kevin McCarthy. He says yes to everybody, tries to make everybody happy. And it always comes back to bite you in the butt," the lawmaker said before sarcastically offering, "Will the real Kevin McCarthy please stand up?"

Another Republican officeholder concurred, charging, "He always puts his political finger to the wind and tries to shift. It seems to be based on his personal ambitions."

The Politico report adds, "McCarthy has built his political identity around his close relationship with Trump, emerging as one of his closest and most reliable conservative allies on Capitol Hill. And it's a reputation that McCarthy appears eager to maintain, even in the wake of the Jan. 6 attacks that left five dead."