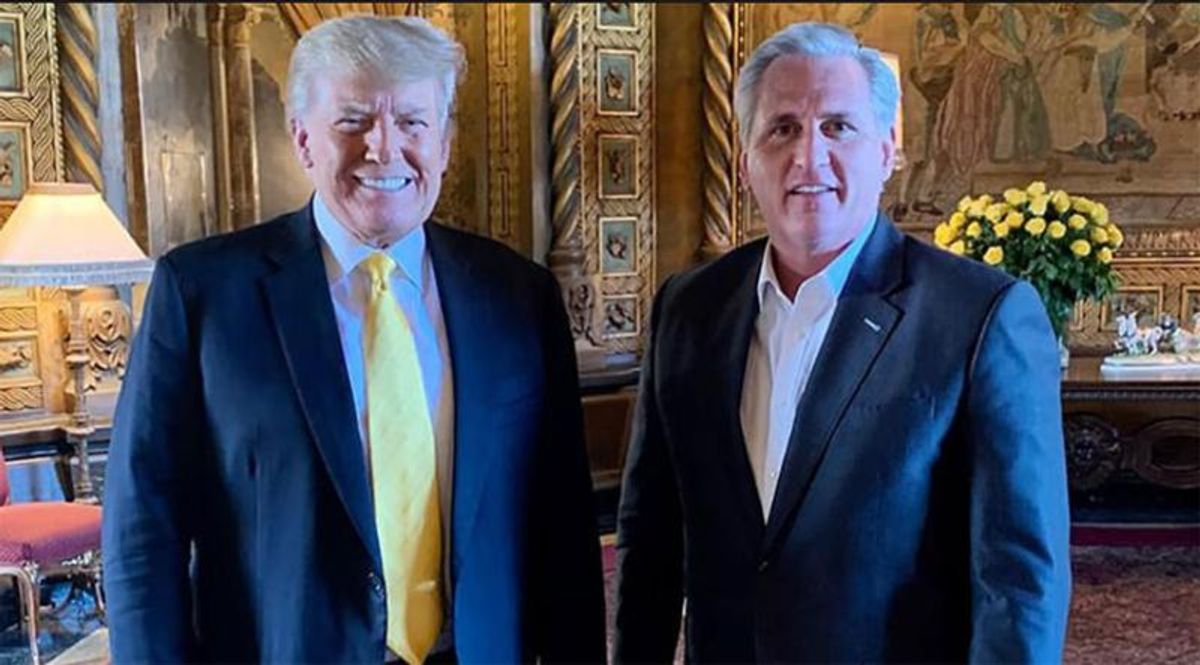 House Minority Leader Kevin McCarthy (R-CA) was destroyed online by both sides after he tried to claim that the GOP is a "big tent" party and open to all "thoughts" while at the same time shoving Rep. Liz Cheney (R-CA) out of her leadership position.

The House GOP held a vote on Cheney after she and nine other Republicans voted to impeach former President Donald Trump in his final days in office. While Cheney was one of ten members, she's the one who has been singled out over the past several months.

McCarthy even took the same position as Cheney calling out Trump in January for leading his rally crowd to attack the U.S. Capitol.

See the tweets trashing McCarthy below:

“Republicans are the big tent party”. Is this what McCarthy means by big tent: https://t.co/qGboNulExn https://t.co/gcvdRGfrju
— Matthew Dowd (@Matthew Dowd)1620677741.0

Kevin McCarthy: “Each day spent relitigating the past is one day less we have to seize the future.” George Orwell,… https://t.co/GB4iZQ6hJb
— Bill Kristol (@Bill Kristol)1620674976.0

@mattgaetz is being investigated for using cashapps to pay women for sex including an underage girl and @GOPLeader… https://t.co/4vNyklX7bJ
— Resist & Desist (@Resist & Desist)1620676375.0

Ironic McCarthy justifies firing Cheney by evoking free speech & thought.
"We are a big tent party": a tent big enough to include those who believe in the Big Lie that the election was stolen, those willing not to disagree with them, but not anyone calling out the Big Lie. pic.twitter.com/XKxwPTP8OR
— Don Moynihan (@donmoyn) May 10, 2021

"Big tent" unless you acknowledge that Biden was elected and oppose insurrections.

"Embrace free thought and debate" unless you disagree with Trump & McCarthy.

"Our leadership cannot be distracted" from spreading the Big Lie & worshipping the Dear Leader.

Height of irony from Kevin McCarthy as he schedules a vote to kick Cheney out. "Unlike the left, we embrace free th… https://t.co/ZqdocxxkDu
— Logan Phillips (@Logan Phillips)1620676962.0

Kevin McCarthy didn't have any employees at his "sandwich shop". He was the only employee. It was just a counter space added on to his uncle's yogurt shop. Just saying.
— Kern County Indivisible (@IndivisibleKern) May 10, 2021