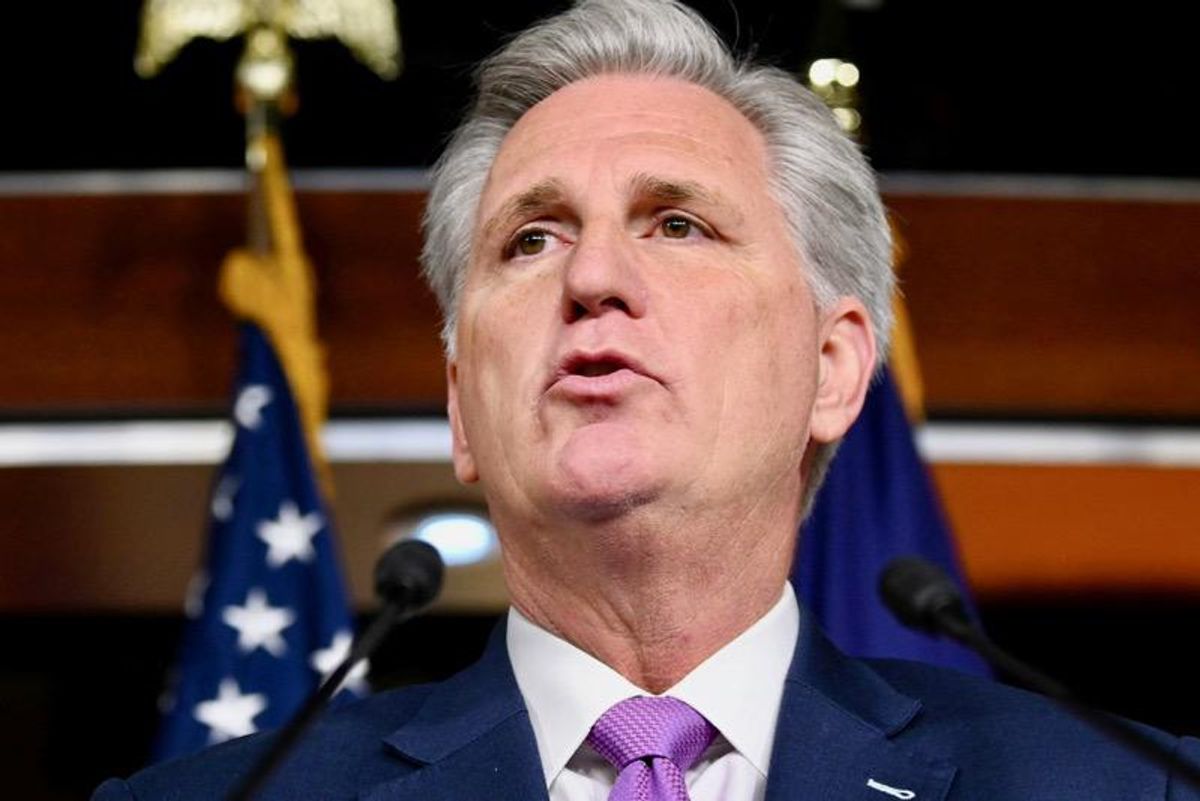 McCarthy now faces the same challenge, trying to make everyone happy as the Republican Caucus brings together the right and the far-right.

Axios noted that McCarthy's digital director, Caleb Smith, sent out an email begging for retweets this weekend saying that he agreed that insurrectionists should be prosecuted.

"HuffPost and the Blue Checks have been out in full force today trying to distort Leader McCarthy's words in an effort to divide America even further," Smith wrote in an email obtained by Axios. "They deserve to be called out. Would greatly appreciate your help in pushing back by retweeting this:

From the minute the Capitol was attacked, I called for the rioters to be prosecuted to the fullest extent of the la… https://t.co/OKAlK1iPUC
— Kevin McCarthy (@Kevin McCarthy)1611429084.0

McCarthy is stuck between both factions of his party: those who think the attack on the Capitol was wrong and those who support it and believe it's being mischaracterized.

McCarthy, like many Republicans, supported the election protest that attempted to reject the Electoral College ballot counts for Wisconsin, Pennsylvania and Georgia. The ceremonial role of the House and Senate to accept the election couldn't overturn anything, but after failing in over 60 court cases and at the U.S. Supreme Court, Trump's allies tried to make it seem like there was hope.

What at least one Republican didn't understand is that the votes that the Trump campaign was disputing were those from largely Black voters. Trump targeted parts of Milwaukee, Philadelphia, and Atlanta where Black voters helped make the difference for Democrats. Not only is the attempt to overthrow the election seen as unamerican and an attack on Black voters, the "stop the steal" campaign is what encouraged the violence at the Capitol. It has become a major reason that corporate donors are backing away from people like Sens. Ted Cruz (R-TX), Josh Hawley (R-MO) and McCarthy.

McCarthy is trying to speak out of both sides of his mouth, saying that he wants to hold rioters accountable and that Trump bears responsibility, while still supporting the attempted election overthrow that led to the attack on the Capitol.

Axios explained the strategy isn't working, and it's alienating everyone. Over the weekend McCarthy attempted to try a "both sides" approach, claiming that "everyone" is responsible for the "temperature" in the country. The GOP alleges Black Lives Matter protests that result in a Wendy's being burned to the ground in June 2020 is equivalent to the overthrow of the legislative branch of government, nullifying the votes of millions of Americans, and an attempted assassination of the vice president and the House speaker.

McCarthy even tried to have it both ways on Rep. Liz Cheney (R-WY), who is navigating calls for her resignation after she supported the impeachment of Trump. McCarthy claimed he supported her, but he also has "concerns."