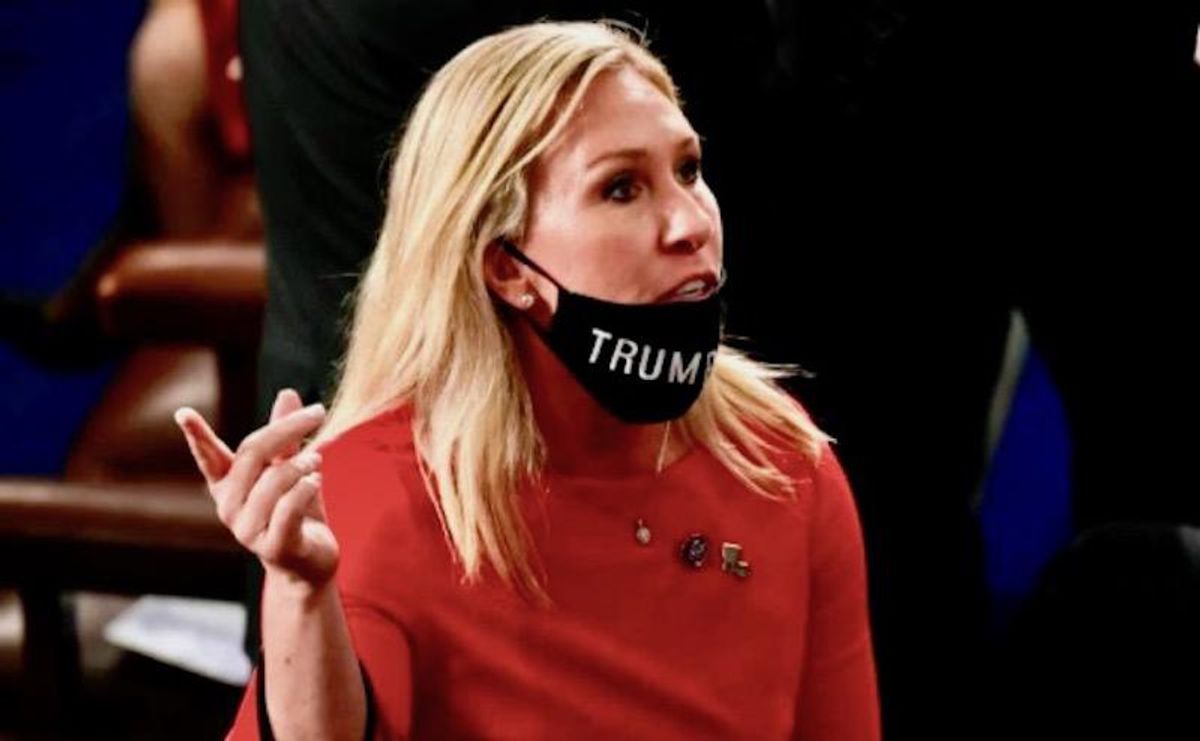 I just made a motion to adjourn to stop Congress from passing the $1.9 trillion dollar massive woke progressive Democrat wish list.
The GOP has messaged against this ridiculous bill. We should do everything to stop it. Pay attention if Rs vote to adjourn. Or with the Dems. — Marjorie Taylor Greene 🇺🇸 (@mtgreenee) March 10, 2021

Marjorie Taylor Greene just did one of her random motions to adjourn before the House is supposed to start debating the Covid bill, and asked for a roll call vote pic.twitter.com/MDSd314FBQ
— Aaron Rupar (@atrupar) March 10, 2021

A motion to adjourn requires the entire House to stop what they're doing and come to the floor to vote. It can delay proceedings by an hour, sometimes longer.

One Democratic Congressman expressed his frustration:

House Republicans led by Marjorie Taylor Greene are attempting to block Covid relief for the American people by ending all business in the House for the day. It is 9:24 a.m.
— Rep. Don Beyer (@RepDonBeyer) March 10, 2021

Greene and members of the far right Republican House Freedom Caucus are using these procedural tactics to disrupt Congress's work.

This week Greene and the Freedom Caucus blocked quick passage of at least 13 uncontroversial bills, including a bill to prevent child abuse.

Other legislation the House Freedom Caucus have blocked this week from quick passage are bills to vaccinate all veterans, and awarding Congressional Gold Medal to members of the Capitol Police Force and the Washington Metropolitan Police Department.

"Another tactic has also angered lawmakers on both sides: Forcing the House to vote on motions to adjourn, a time-consuming process that eats up floor time and distracts from committee business -- a move that has been used by freshman Rep. Marjorie Taylor Greene, the controversial Georgia Republican who was booted from her committee assignments after many incendiary comments came to light."

"It's just pissing everyone off," said one senior House Republican member, asking for anonymity to discuss the matter candidly. "Tactics without reason, they go nowhere," said Rep. Buddy Carter, a Georgia Republican. "So you've got to have a game plan. You just have to ask about the game plan there."

But Greene says she doesn't feel she's doing anything wrong, and claims to have support of her Republican colleagues: "I don't think there is many of my colleagues concerned with my tactics."

Earlier this week Greene claimed to be concerned for the well-being of children, invoking that claim to support her tactics, which are delaying numerous bills.

"The American people deserve to know where their member of Congress stands with a roll call vote," Greene said in a statement to CNN. "While thousands of illegal aliens are invading Biden's open border, American kids are losing their education with closed schools, thousands of small businesses have been forced to shut down, the People really don't care about politicians whining about voting and doing their job for 10 hours."

None of the bills in question had anything to do with those issues, CNN reported.

Democratic leadership is pressuring House Republican Minority Leader Kevin McCarthy (R-CA) to get control of his caucus. Greene's attempt to block the COVID relief bill only furthered that anger.

"He was not aware of the effort that was being made," Hoyer told reporters. A McCarthy aide flatly denied that the GOP leader was unaware of the tactic.

"I don't see that this is resonating at home, the motions to adjourn," Upton said. "I mean it's just a pain. It's a pain in the ass."