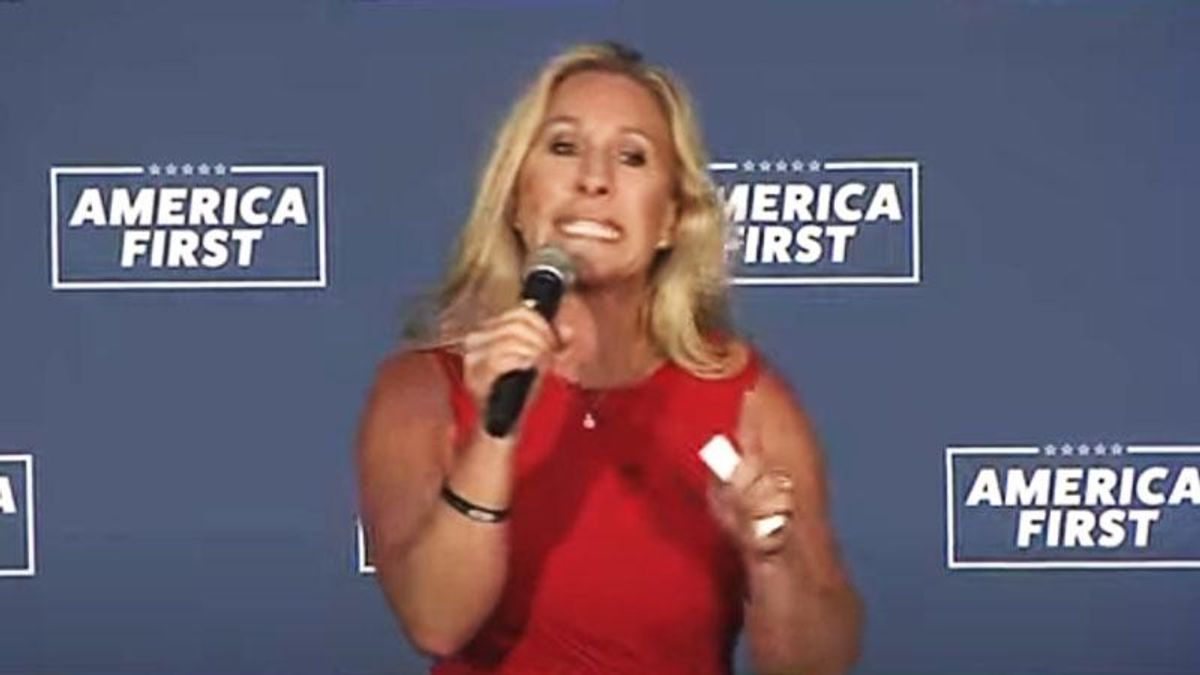 Republican representatives Marjorie Taylor Greene and Matt Gaetz held a spirited event in Des Moines on Thursday night, railing against technology companies, the media, Democrats and members of their own party who were disloyal to former President Donald Trump.

This article was originally published at Iowa Capital Dispatch

“The Democrats, the media and big tech — that's the new axis of evil," said Greene, who was suspended from Twitter last week for posting misinformation about the COVID vaccine. “Because if it's truthful, they don't want to hear it, they don't want to talk about it."

The crowd didn't fill the ballroom at the Iowa Events Center, but it was enthusiastic. Greene and Gaetz mentioned several politicians and bureaucrats by name — Speaker of the House Nancy Pelosi, “The Squad," Senate Minority Leader Mitch McConnell — and the crowd booed for each one. In response to a tirade against Dr. Anthony Fauci, the audience chanted “lock him up."

Gaetz and Greene focused most extensively on President Joe Biden, criticizing his handling of the Afghanistan exit and falsely claiming that Biden did not win the 2020 election. Greene said she would file articles of impeachment against Biden Friday.

“I believe in firing people when they're corrupt and they do a bad job," Greene said. “Joe Biden is failing America and he needs to be impeached."

Both Greene and Gaetz are controversial figures in the GOP. Gaetz, a Florida representative, is embroiled in investigations into an alleged sexual relationship with a 17-year-old that may have violated sex trafficking laws. Greene, a freshman representative from Georgia, has spent her tenure promoting conspiracy theories about the 2020 election, the COVID vaccine and more. She was removed from committees in February and reprimanded in May after comparing mask mandates to the Holocaust.

Iowa's Republican delegation in D.C. did not publicly support the event — none of the state's senators or representatives appeared on stage with Gaetz and Greene, and they did not post on social media about the rally.

Iowa Democrats loudly condemned the event and called for Republicans to denounce it.

“We're still waiting for Governor Reynolds and Iowa Republicans to denounce the racist and homophobic language of Congresswoman Marjorie Taylor Greene," Iowa Democratic Party Chair Ross Wilburn wrote in a statement. “Their silence emboldens the dangerous fringes of their party and encourages violence against our friends and neighbors."

Neither Gaetz or Greene discussed personal political ambitions on Thursday, instead focusing on Trump. Greene asked the crowd if they were ready to support Trump in 2024. Gaetz suggested Trump run for the House instead — “Why wait until 2024?" — and become Speaker of the House in 2022.

“You'll be hearing a lot from us," Gaetz promised at the end of the event. “Thanks for fighting for our country and for our movement. Make sure you're ready to go caucus for Donald Trump in 2024 — we'll be there with you."