Trump's defense secretary hoped election loss would be 'clean and clear' in fear of troops being called in: new book 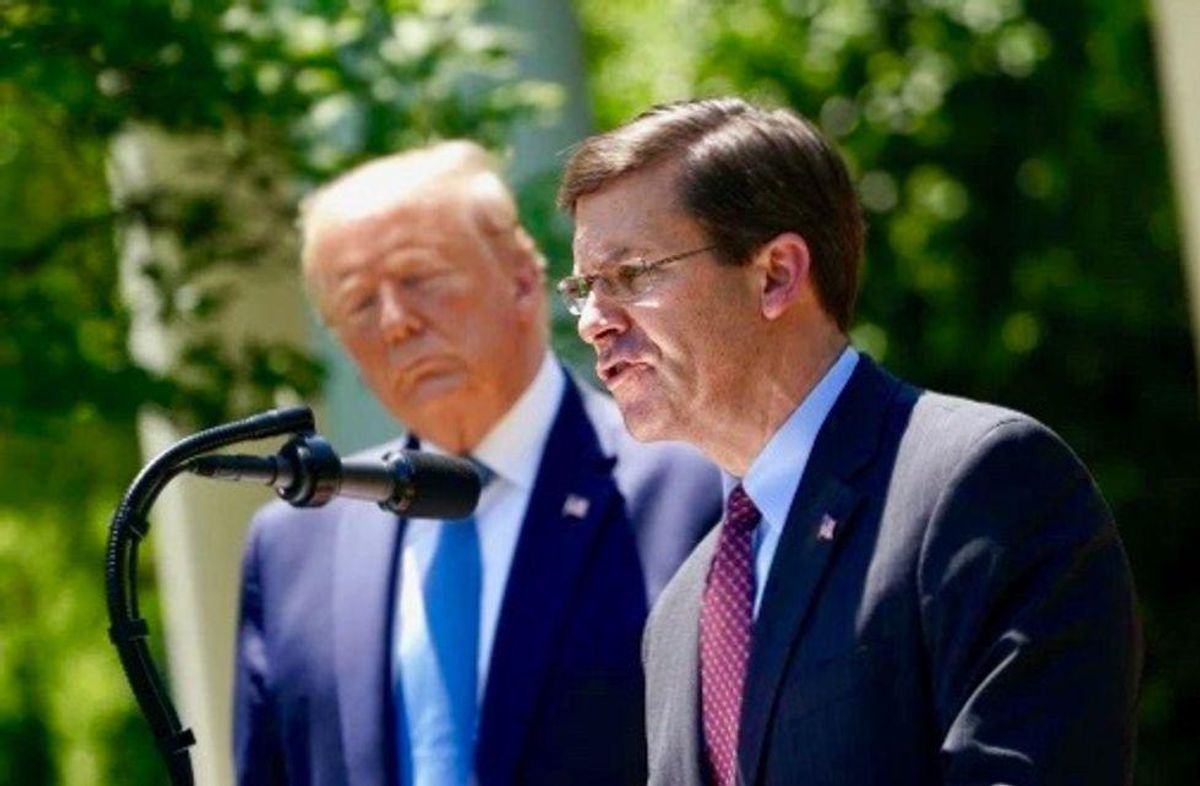 Donald Trump's former defense secretary hoped the Nov. 3 election would be quickly and clearly settled for fear the commander in chief would call out troops to keep himself in office, according to a new book.

Washington Post reporters Carol Leonnig and Philip Rucker revealed in their forthcoming book, "I Alone Can Fix It: Donald J. Trump's Catastrophic Final Year," that then-Defense secretary Mark Esper and other top Pentagon officials were focused on keeping the peace -- and the lifelong Republican found himself rooting for Democrat Joe Biden to win.

"Esper had lived through the strain of the 2000 recounts and the Bush v. Gore case," the journalists reported. "He had repeatedly told his deputies that he wanted this election to be 'clean and clear,' as in free of any suggestion of corruption and indisputably clear who had won. He had feared that anything less might give Trump some shred of a reason to call out troops."

NBC News was planning to report Nov. 2, the night before the election, that Esper was preparing to be fired the day after voters went to the polls, and directed his aides to dispute the information as overhyped in hopes of delaying its publication.

"In truth, Esper expected that Trump would fire him after the election," Leonnig and Rucker reported, "but was hoping to hold on if he could, at least for a few days after the election. He was worried about what Trump might try to do with the military if he were not at the helm. Esper warned [NBC News reporter Courtney] Kube that publishing her story could result in a more compliant acting secretary of defense, which could have worrisome repercussions. The story was held as they tussled back and forth."

Trump had wanted to fire Esper since their June 3, 2020, argument over the Insurrection Act, but other administration officials persuaded the president to keep him on, but the former defense secretary -- who had worked for the Heritage Foundation and two GOP senators -- went to bed Nov. 3 comforted that Biden appeared to be on his way to victory.

"Esper had worked with Biden and his secretary of state in waiting, Antony Blinken, when he was a senior staffer on the Senate Foreign Relations Committee," Leonnig and Rucker wrote. "He had confidence that they were serious, stable people who cared deeply about shoring up national security. Esper couldn't say the same about Trump."

Trump did end up firing Esper on Nov. 9, two days after Biden was projected as the election winner.