'Pandemic is not over': As Delta variant spreads, US Surgeon General 'worried about what is to come' 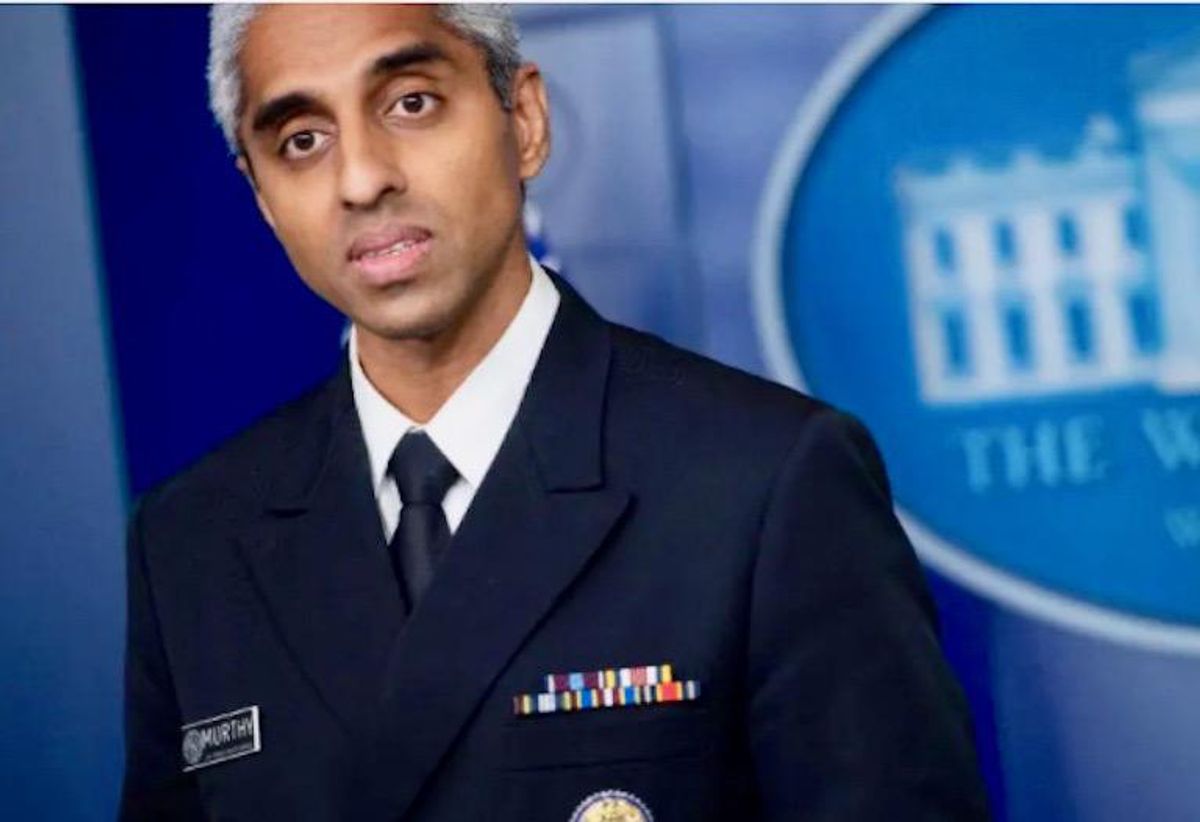 US Surgeon General Vivek Murthy, seen in a July 15, 2021 White House briefing, is 'deeply concerned' about a Covid-19 resurgence in the fall(AFP)

During appearances on multiple Sunday talk shows, U.S. Surgeon General Dr. Vivek Murthy expressed dismay over the current surge in Covid-19 cases—more than half of which are now linked to the highly transmissible Delta variant—throughout the country, especially in areas with low inoculation rates, and urged people to get vaccinated swiftly.

"We've made so much progress over this past year, but what I worry about are those... millions of people in our country who are not vaccinated."
—Dr. Vivek Murthy

"I am worried about what is to come because we are seeing increasing cases among the unvaccinated in particular," Murthy told Dana Bash, host of CNN's "State of the Union."

"And while if you are vaccinated you are very well protected against hospitalization and death, unfortunately, that is not true if you are not vaccinated," said Murthy.

According to the surgeon general, 99.5% of Covid-19 deaths now occurring in the U.S. are among the unvaccinated.

"That's why it's so important," said Murthy, "that we take every measure possible to make sure people have the information they need about the vaccine, to make sure they have access to the vaccine, and to help them get vaccinated as quickly as possible." He added that "it is our fastest, most effective way out of this pandemic."

Although the U.S. made some progress in combating the virus during the first few months of the year, the highly transmissible Delta variant has become dominant in recent weeks at the same time as fewer people have been getting vaccinated, leading to an uptick in infections and mortality.

Last week, the number of doses administered per day (270,592) declined by 35.7% compared with the previous 7-day moving average. Since peaking in mid-April, when the U.S. was giving out roughly 3.4 million shots each day, on average, the pace of vaccination has declined steadily. Overall, 55.8% of the total U.S. population have received at least one dose of the vaccine, while less than half (48.4%) have been fully inoculated.

As the U.S. vaccination drive stalled, the global circulation of more contagious variants continued. While the Delta variant was responsible for just over 3% of new cases at the end of May, the CDC now predicts that 57.6% of reported cases can be attributed to it.

A recent CNN analysis of data from Johns Hopkins University and the CDC showed that "states that have fully vaccinated more than half of their residents reported an average of 2.8 new Covid-19 cases per 100,000 people each day last week, compared to an average of about 7.8 cases per 100,000 people each day in states that have vaccinated less than half of their residents."

Earlier this month, researchers at Georgetown University pinpointed five undervaccinated clusters in the U.S. that are impeding the ability of the nation and world to contain the pandemic.

According to the team's analysis: "The five clusters are largely in parts of eight states, starting in the east in Georgia and stretching west to Texas and north to southern Missouri. The clusters also include parts of Alabama, Arkansas, Louisiana, Oklahoma, and Tennessee, and are made up of mostly smaller counties but also cities such as Montgomery, Alabama; Shreveport, Louisiana; and Amarillo, Texas."

President Joe Biden on Friday accused social media platforms of "killing people" by allowing misinformation about vaccines and other coronavirus-related topics to proliferate on their sites. According to White House Press Secretary Jen Psaki, just 12 people are responsible for almost two-thirds of all anti-vaccine posts on social media, and yet "all of them remain active on Facebook."

When asked by Bash if conservative news outlets are also complicit in the dissemination of deadly misinformation, Murthy said that "I think all of us, including the media... individuals, and health professionals have the responsibility to share the truth about health... as science informs us."

"Unless we are honest about the consequences of our communication with people, unless we are rigorous about ensuring that what we communicate is actually sourced from science and not from opinion on critical issues like the vaccine... then we are going to ultimately put people at risk," added Murthy, who on Thursday released a Surgeon General Advisory entitled Confronting Health Misinformation (pdf).

As Common Dreams reported on Friday, experts have been particularly alarmed by Covid-19 lies and misinformation promoted by right-wing cable news and websites. Fox News has been a hotbed of anti-vaccine propaganda from both hosts and guests, but the network is not alone in spreading misinformation and sowing doubt. Last week, Newsmax host Rob Schmitt made a Social Darwinian argument that vaccines are "against nature."

During her Sunday morning segment, Martha Raddatz, host of ABC's "This Week," asked Murthy: "If we don't get this under control now, what do you anticipate the fall looking like?"

"I am deeply concerned," Murthy responded. "We've made so much progress over this past year, but what I worry about are those... millions of people in our country who are not vaccinated."

As millions of students prepare to return to school next month, Murthy drew attention to the vulnerability of young children who are not yet eligible for the vaccine.

"We have to still protect our children under 12 who don't have a vaccine available to them." Murthy added. "Our kids depend on the people around them being protected, being vaccinated in order to shield them from the virus. And that's why, again, it's so important for us to get vaccinated."

ABC News reported Sunday that "amid a surge in cases, Los Angeles County reinstated its indoor mask mandate in all public places for all individuals, regardless of vaccination status, and at least 10 additional counties in California, including the city of Berkeley, have highly recommended all residents wear masks indoors again."

Murthy told Raddatz that "in areas where there are low numbers of vaccinated people, where cases are rising, it's very reasonable for counties to take more mitigation measures, like the mask rules coming out of L.A.," adding that he "anticipate[s] that will happen in other parts of the country."

Alluding to the public health crisis that has killed nearly 610,000 people in the U.S. and over four million worldwide, Murthy told Chris Wallace on Sunday during an interview on Fox News that "this pandemic is not over."