'He's running scared': Matt Gaetz buried in mockery after his alibi gets destroyed by fact checker 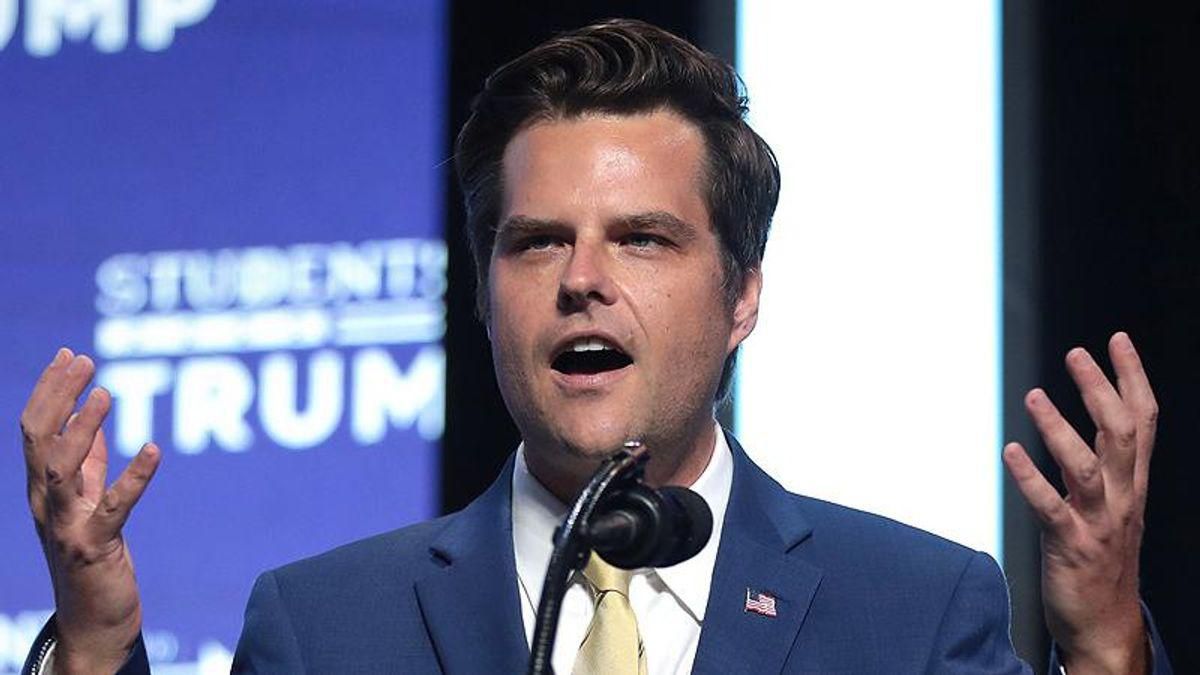 The Washington Post hung "four Pinnochios" on the Florida Republican's claim that his travel records would show he hadn't traveled with a 17-year-old girl, saying the publicly available records do not disprove that he was under investigation for traveling with the teen or arranging her travel.

"We searched through all the available records and found nothing to support Gaetz's claim," wrote the Post's Salvador Rizzo. "We repeatedly asked his staff to show us the records and heard crickets. We asked Gaetz directly — nothing, radio silence."

"As regular readers know, the burden of proof is on the speaker," Rizzo added. "Gaetz is putting up a smokescreen, falsely reassuring viewers with nonexistent evidence. He earns Four Pinocchios. Show us the travel records, and the rating may change."

Gaetz's carefully worded statements don't rule out that he had an underage girl travel separately to meet him somewhere.
— Dale Geldart (@DaleGeldart) April 1, 2021

He is running scared, he knows the DOJ is close to finding evidence against him. Typical Republican deflecting, pointing elsewhere. No proof that he is being extorted. agree, as a private citizen, he does not have to log his travel records.
— Ken Niles (@showme_Taz) April 1, 2021

And the forward to the story is the investigation was started under William Barr so this isn't some democratic hoax or plot.
— Renee Dale (@rendale) April 1, 2021

“Here's the bottom line: House members' personal travel and expenses are not subject to disclosure, so there would be no public records to check regarding Gaetz's private life."
— Winston Smith 🇺🇸❤️💙🇺🇸 (@gaslightingus2) April 1, 2021

Gaetz is purposefully trying to conflate two separate things. 1. He is under investigation for sex with a minor. 2. Someone may be trying to extort his father to keep info from that investigation from leaking. Gaetz wants us to believe he's just being extorted
— Joe King (@flerbeder) April 1, 2021

This makes me a bad person, but I'm happy to see Gaetz go down in flames. And I'm damn tired of Rs passing laws to control other people's private parts/lives — they need to deal with their own, very real, problems.
— Elizabeth DiPalma thinks Truth Matters (@edipalma) April 1, 2021

Matt is working hard to hide something.
Remember his threats to Michael Cohen @MichaelCohen212 before he testified. (Criminal witness intimidation). Gaetz enjoys dishing it out, but can't take the heat himself. @TheDemocrats pic.twitter.com/10vRsfyqdE
— MadMerlin✨ᶜʰʳᶦˢ ᴹᵒʳʳᶦˢ (@MadMerlin5) April 1, 2021