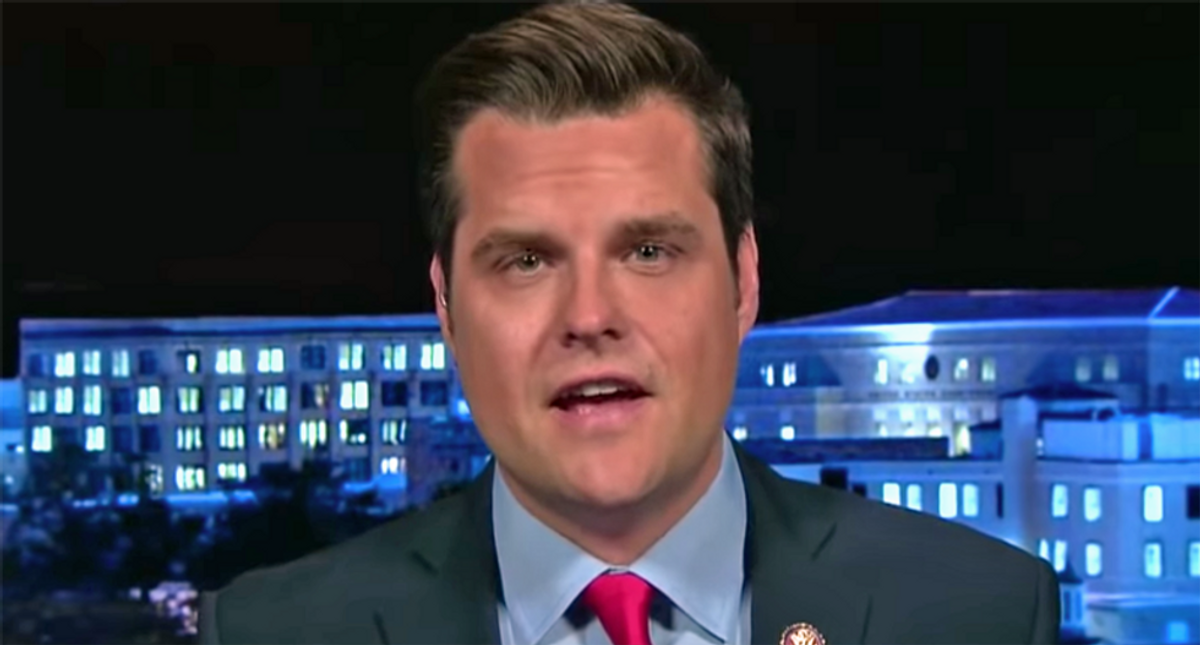 
Gaetz reportedly remains under investigation by the Justice Department for a range of potential criminal activities, all of which he vehemently denies. The department doesn't comment publicly on such matters.

What did make the news this week was that Stephen Alford, a Florida developer previously convicted of fraud, has been arrested. Alford is accused of attempting to extort $25 million from Gaetz's father Don Gaetz in exchange for "a presidential pardon that would shut down a high-profile, criminal sex-trafficking investigation into the Republican congressman," Politico reports.

Gaetz seized on the development to take a page out of Donald Trump's political playbook. He embarked on a public-relations offensive misapplying the phrase "exoneration" much like Trump did quite deftly during the Mueller Report.

The question of Alford's guilt or innocence has no bearing on the questions apparently before DOJ, which include: whether Gaetz had sex with a minor and transported her across states lines in violation of sex trafficking laws; whether Gaetz took gifts, including travel and paid escorts, in exchange for political favors; whether his connections with the medical-marijuana industry, which he supported as a legislator, crossed the lines of legal conduct; and whether he might have obstructed of justice related to one or more of these probes.

You would never know about any of that from the coverage Gaetz garnered this week during his media victory tour following Alford's arrest.

"Congressman Matt Gaetz (R-Fla.) has been exonerated and the Department of Justice's sex trafficking investigation has been shut down as the man who made the false allegations is now behind bars," OANN reported--inaccurately--below the headline ""Rep. Matt Gaetz Exonerated, Fla. Developer Charged With Extortion."

If there was documentation that the sex-trafficking investigation has been shut down, OANN forgot to include it.

TownHall.com weighed in with a strikingly similar headline: "Matt Gaetz Exonerated from 'Pile of Lies' After Man Charged with Extortion." Its story had no content related to the charges reported under investigation at Justice. In fact, it was a brief piece mostly recounting quotes given by Gaetz to Axios related to the extortion attempt.

It can be argued that Gaetz was "exonerated" in his claim that Alford was attempting to extort him -- at least if Alford's indictment results in a conviction -- but just as Trump used Mueller's failure to indict him as "exoneration" with respect to Russia, so Gaetz is finding some success with the art of conflation now.

Just today on Twitter -- even though nothing new has broken in recent days related to Alford, or to the accusations against Gaetz, right-wing commentator Dinesh d'Souza tweeted "GOP Rep. Gaetz exonerated after major development." And Newsmax contributor Jessie Jane Duff posted a Tweet with virtually the same language: "Gaetz has been exonerated after a major development in the witch hunt against him."

As recently as August 31, however, Politico put the story in a little clearer perspective than the word "exoneration" would connote:

The alleged shakedown scheme occurred as word spread through Gaetz's northwest Florida district that he was under investigation in the sex-trafficking a 17-year-old, a crime he has denied.

The allegations against Gaetz were spread by Joel Greenberg, the congressman's onetime friend and a former Seminole County tax collector, who pleaded guilty for sex trafficking the minor, for falsely smearing a political foe as a pedophile and for a host of other crimes. To get a lighter sentence, Greenberg is cooperating with federal authorities in their investigation of Gaetz. He is awaiting sentencing.

No charges against Gaetz have been filed, although investigators have interviewed many of his associates, including past girlfriends. The investigation appears to have slowed down as federal prosecutors negotiate with a former girlfriend of Gaetz's who wants an immunity deal in return for whatever testimony she might give.