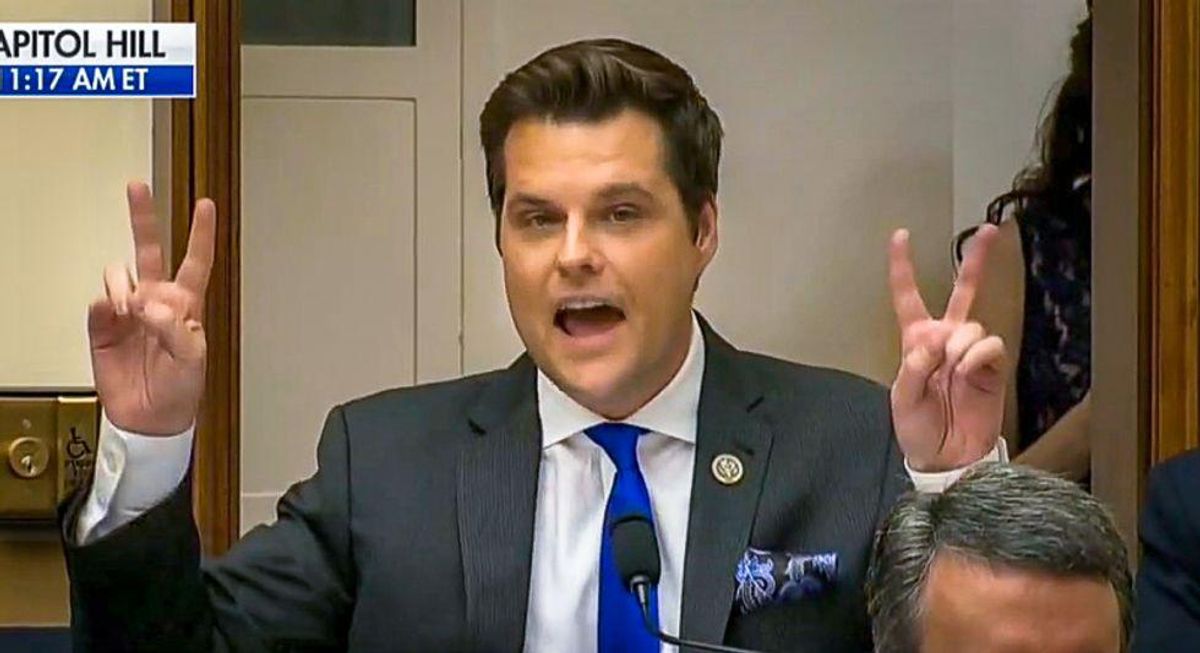 A report from Orlando Weekly from December 2017 reported that Rep. Matt Gaetz (R-FL) was the single "no" vote on a bill titled the Combating Human Trafficking in Commercial Vehicles Act. The legislation aimed to supply the federal government with more resources to fight sex trafficking. It then passed unanimously through the U.S. Senate.

In all of the Republican-led House and Senate, Gaetz was the only one not to support the bill.

"Unless there is an overwhelming, compelling reason that our existing agencies in the federal government can't handle that problem, I vote no because voters in Northwest Florida did not send me to Washington to go and create more federal government," Gaetz said in a Facebook Live video, reported the Pensacola News Journal. "If anything, we should be abolishing a lot of the agencies at the federal level like the Department of Education, like the EPA and sending that power back to our state governments."

Now it's Gaetz who is being investigated for any role he may have played in sex trafficking through a friend, former Seminole Tax Collector Joel Greenberg.

It prompted many to wonder if the two things are linked or just a coincidence. Coincidently, Gaetz also announced earlier on Tuesday that he may retire early, having just served in office for two terms. For officials to get a Congressional pension, they have to serve in Congress for five years.

How it started: Matt Gaetz was the only Congressperson to vote against the anti-human trafficking bill How it’s go… https://t.co/zaXgGk5BjR
— Lindy Li (@Lindy Li)1617153882.0

With the news that Florida Rep. Matt Gaetz is under investigation from the Department of Justice for potentially vi… https://t.co/HESRINI476
— John FitzGerald (@John FitzGerald)1617152943.0

"That Matt Gaetz could vote against a law to fight human trafficking/sex slave trade is beyond comprehension," said… https://t.co/4sUZe3K5Ip
— dylan🇺🇸 (@dylan🇺🇸)1617148141.0

Matt Gaetz the ONLY congressman to vote against a child sex trafficking bill if that wasn't a big enough hint of wh… https://t.co/0sO8QfIFkf
— Self Absent (@Self Absent)1617158065.0

This is why Matt Gaetz has told people that he may decide not to run again for congress. New York Times: Matt Gaet… https://t.co/mdxmtJr9tL
— Bill Madden (@Bill Madden)1617144239.0