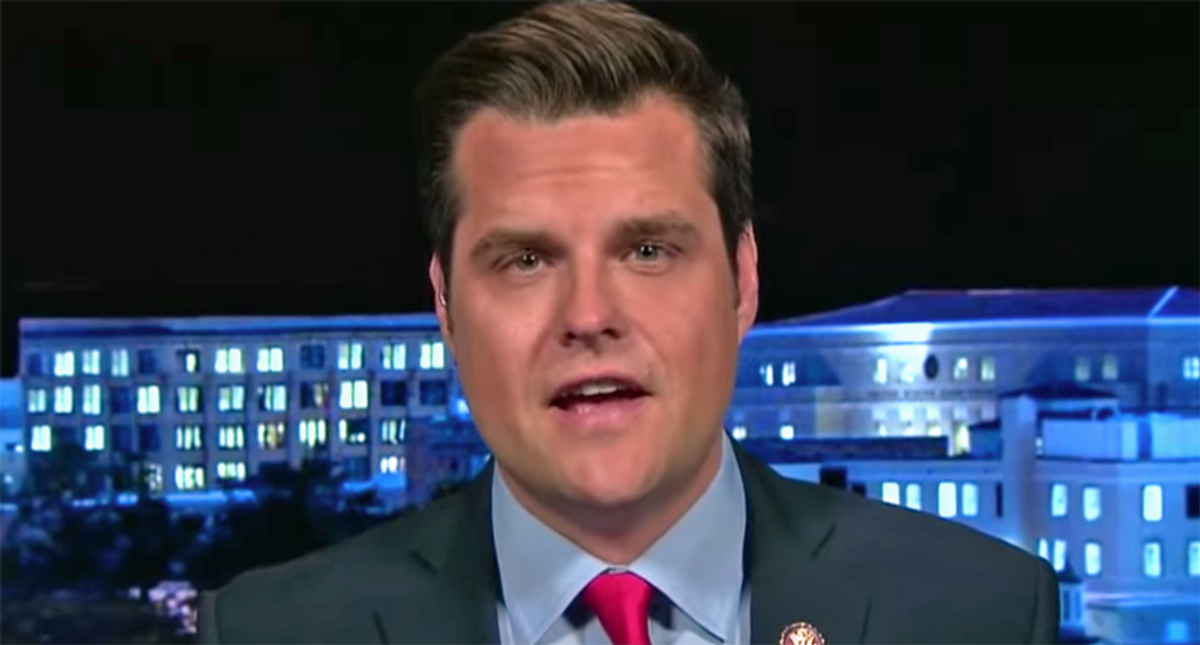 Rep. Matt Gaetz (R-FL) fired off an attempted snappy defense of former president Donald Trump, and was swiftly met with mockery and ridicule.

The Florida Republican tweeted out the would-be rejoinder to the impeachment House Democrats will carry to the Senate for trial, set for Feb. 8.

"Impeachment is the zenith of cancel culture," Gaetz tweeted.

For sure it was wild how the rioters canceled that cop
— Orli Matlow (@HireMeImFunny) January 25, 2021

Insurrection is the zenith of treason
— Luke Zaleski (@ZaleskiLuke) January 25, 2021

Umm, it's in the Constitution, Matty. Why do you hate our Constitution?
— Cat Food Casserole (@CasseroleFood) January 25, 2021

@mattgaetz desperately Wants Trump to be his sugar daddy.
— Bridgette 🎉 Biden Is My President 🎉🥂 (@bridgettyh) January 25, 2021

Trying to cancel the votes of Black people in six states is the zenith of cancel culture.
— JRehling (@JRehling) January 25, 2021

and you're the human embodiment of a frat paddle, we've all got opinions
— Gabriel Hoyle 🌊 (@gbrlhoyle) January 25, 2021

So only us little people can be held to the rule of law? You can incite violence, commit fraud, lie, cheat and steal and it's all good? We need criminals to be held accountable no matter the influence and the power.
— Jïmm¥†ðtheO (@JimmytotheO) January 25, 2021

@RepMattGaetz Trump’s not a bystander or a victim. He was the one who stood to benefit the most. The one who orches… https://t.co/5pWeRPWfLj
— Luke Zaleski (@Luke Zaleski)1611600963.0

Is Matt Gaetz actually a liberal plant? I can't think of many better arguments against conservative "cancel culture… https://t.co/BTcIlTSi6G
— David A. Graham (@David A. Graham)1611599942.0