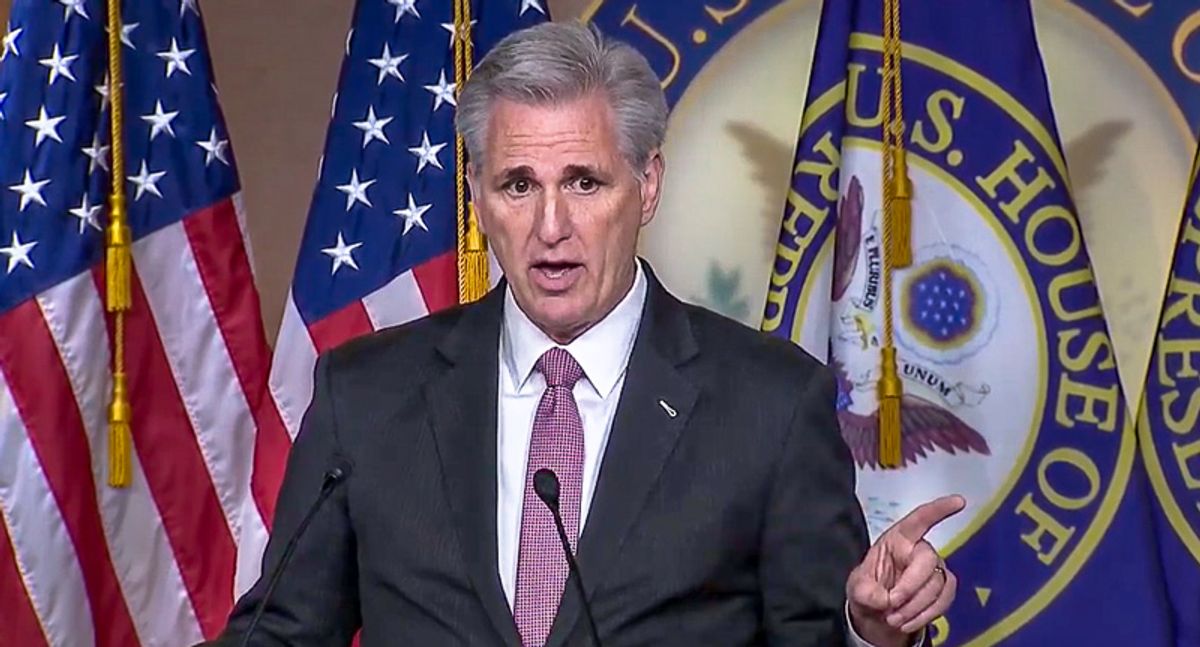 Waters on Monday clarified her remarks after right wing uproar.

But McCarthy and his far right wing extremists, including Rep. Marjorie Taylor Greene, went on the attack, with Greene saying she wanted to expel Waters.

“This weekend in Minnesota, Maxine Waters broke the law by violating curfew and then incited violence,” McCarthy falsely claimed. “Speaker Pelosi is ignoring Waters' behavior—that's why I am introducing a resolution to censure Rep. Waters for these dangerous comments.”

Hi congressman. Anything on censuring your members for trying to create a white nationalist caucus? Or what about Matt Gaetz, given the very serious investigation relating to him? He’s still on Judiciary, right? https://t.co/N00yPmJqEO
— Joy-Ann Pro-Democracy & Masks Reid 😷 (@JoyAnnReid) April 19, 2021
The same republican party voted against impeaching Trump for inciting violence and plotting a coup pic.twitter.com/1WaETxwgwa
— ERIC JEM🌊🌊🌊🌊🌊 (@mubazieric) April 19, 2021

You were saying? https://t.co/H8jKEMsgKf pic.twitter.com/d7neFgKFpS
— The Lincoln Project (@ProjectLincoln) April 19, 2021

She didn't incite or support an insurrection or try to overturn the results of a valid election like you and many members of your caucus did. Nor did she storm the capital. Nor did she kill Americans by disparaging and undermining basic public health measures like wearing masks.
— Jinx in TN (@grrenshaw) April 19, 2021

Insurrection-excuser and MAGA riot enabler Kevin McCarthy proposing to censure Maxine Waters is laughable.
Take the beam out of your own eye first, Republicans. Your caucus has party members that have approved of KILLING members of the opposite party. https://t.co/DmstOXCFJA pic.twitter.com/3Un3tiXG9e
— AJ (@Wavinator) April 19, 2021

This you with the Big Insurrectionist Liar, Kev? pic.twitter.com/HsnJTKPQVZ
— George “WEAR A MASK & WASH YOUR HANDS” Scriban (@scriban2) April 19, 2021

And you’ve ignored Gym Jordan, Matt Gaetz, Devin Nunes, Lauren Boebert, Marjorie Green, and countless other’s in your caucus. So how about you stay in your lane and fix yourself. https://t.co/LI3ICrp7IG
— Nicholas Elavsky (@Th3N1ck) April 19, 2021

You were there when riots happened at the Capitol, traitor. https://t.co/2JqH32enIJ
— For the love of Falkor (@Culinary_orgasm) April 19, 2021

These people are always quick to attempt to silence black women every chance they get. Shameful.
But you cannot shame the shameless. https://t.co/Cv1ZZB1BR6
— José Angel (@gastlichu) April 19, 2021

Slap her on the hand if you think you must Kev, but you have guilty AF insurrectionists IN CONGRESS STILL
Gaetz
Hawley
Boebert
Brooks
Greene
Cruz
Time for consequences for those who tried to overthrow democracy https://t.co/QNlPirIHXL
— Kelly D is Pfizerized (@KellDA) April 19, 2021