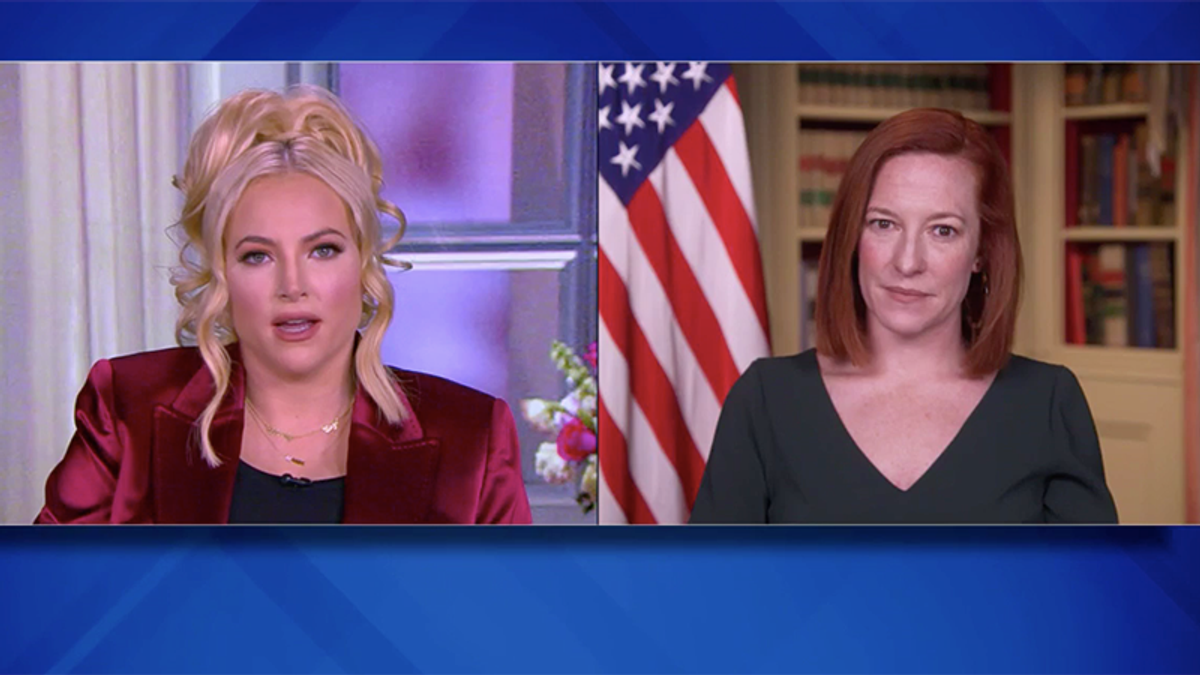 A combative Meghan McCain demanded answers from White House press secretary Jen Psaki on how President Joe Biden's policy is all that different from President Donald Trump separating kids from their parents in detention facilities.

It was a similar comment former Trump aide Stephen Miller said on Fox News Wednesday evening. Miller was the architect of the policy that took children from their parents to begin with, NBC News reported. "Miller saw the separation of families not as an unfortunate byproduct but as a tool to deter more immigration."

The Biden administration had to reopen an HHS facility because there are still a number of children whose parents haven't been found after they were taken from their parents. When Trump left the number was at 611 children whose parents couldn't be found. Wednesday, that number fell by 105 children thanks to the work of organizers on the ground, NBC News reported.

"We are not ripping children from the arms of their parents," Psaki explained. "That is horrible and something we saw in the last administration, but we're seeing kids are fleeing prosecution. They're fleeing really difficult circumstances in their home country and they're coming to the border and we have to figure out how to treat them humanely and keep them safe. And in a time of covid, that means we needed to open an additional facility so we had to have educational services, so we could have legal services and medical and health services and have those kids there treated humanely until we can find proper homes, family placements for these kids. This is incredibly difficult. it's heart-wrenching and it's a really difficult decision and it's the best decision we could make to keep these kids safe until we can get them to the right places and the right homes."

"I just want to know are you or are you not detaining children in a different facility," McCain demanded to know.

Psaki explained that it was a facility that was "revamped" and "redone" to ensure children have access to education, health services and that the government can work to find proper homes.

"We can't send them directly to families that haven't been vetted," Psaki said. "We've seen issues with that in the past. We can't have them all in the former HHS facility because of COVID, and we need to make sure there are safety protocols so they're not in beds next to each other."


McCain said that even Rep. Alexandria Ocasio-Cortez is complaining about the children being in the facilities. Whether it's called putting them in a cage or a facility, McCain said it's "potato patahto" and hypocrisy from the administration.

Kids aren't being separated from their families anymore, and that's one point that is different from the Trump administration. There are minor children who are trying to cross and those children are the ones the government is working to help while trying to reunite the remaining 506 children who haven't be reunited with their families. Those children didn't magically find their families when Biden was reelected. They still need help and Biden reopened another facility to give them better, safer conditions, ensure education, medical and mental health services were available.

"This is a facility -- and we had to open a new one to make sure we have the safety protocols in order to address the COVID needs and the health and safety needs because we can't have as many kids in the former HHS facility," said Psaki. "That's exactly what we did, but our objective is to get these kids into safe homes with their families as quickly as possible, and we are absolutely not doing what the former president did, and what frankly the current president and the current vice president objected to, which is ripping kids from the arms of their parents. That is not the policy of this administration and not something we would do."