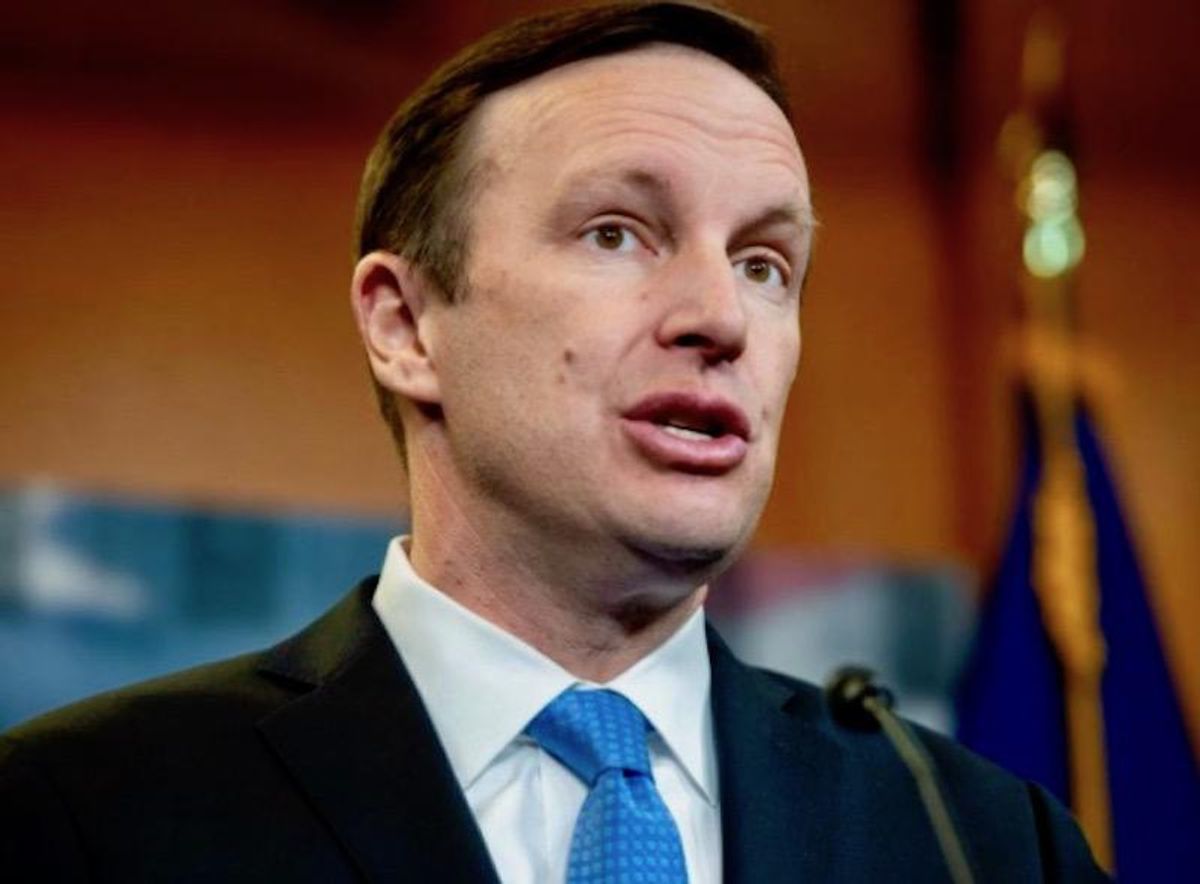 Sen. Chris Murphy (D-Conn.) (Saul Loeb/AFP)
Lawmakers in Congress are under fire from digital rights campaigners for embedding three controversial changes to online copyright and trademark laws into the must-pass $2.3 trillion legislative package—which includes a $1.4 trillion omnibus spending bill and a $900 billion Covid-19 relief bill—that could receive floor votes in the House and Senate as early as Monday evening. The punitive provisions crammed into the enormous bill (pdf), warned Evan Greer of the digital rights group Fight for the Future, "threaten ordinary Internet users with up to $30,000 in fines for engaging in everyday activity such as downloading an image and re-uploading it... [or] sharing memes." While the citizenry had almost no time to process the actual contents of the 5,593 page legislative text, Greer said Monday afternoon that the CASE Act, Felony Streaming Act, and Trademark Modernization Act "are in fact included in the must-pass omnibus spending bill." As Mike Masnick explained in a piece at TechDirt on Monday: The CASE Act will supercharge copyright trolling exactly at a time when we need to fix the law to have less trolling. And the felony streaming bill (which was only just revealed last week with no debate or discussion) includes provisions that are so confusing and vague no one is sure if it makes sites like Twitch into felons. "The fact that these are getting added to the must-pass government funding bill is just bad government," Masnick added. "And congressional leadership should hear about this."

Um. Admitting that you're using a must pass government funding bill to sneak through legislation that you couldn't pass normally is... a choice I guess. https://t.co/atkS2Ny8nr

According to Fight for the Future, "More than 20,000 people had called on House and Senate leadership to remove these dangerous and unnecessary provisions from the must-pass bill," yet Congress chose to include them anyway. "This is atrocious," Greer said in her statement. "We're facing a massive eviction crisis and millions are unemployed due to the pandemic, but congressional leaders could only muster $600 stimulus checks for Covid relief." And yet, lawmakers "managed to cram in handouts for content companies like Disney?" Greer continued. "The CASE Act is a terribly written law that will threaten ordinary Internet users with huge fines for everyday online activity. It's absurd that lawmakers included these provisions in a must-pass spending bill."

They're voting soon. Keep making noise! Even if this bill passes we are going to have a massive fight in 2021 to fix the DMCA and defend the rights of Internet users and online creators. Keep retweeting, keep signing petitions, keep sounding the alarm.https://t.co/AuXeBYNEOm

Explaining why the inclusion of these provisions is dangerous, Masnick said "there's a reason [why] copyright is generally controversial." Even "small changes" threaten a "massive impact on... the public's ability to express themselves," he wrote. Greer echoed Masnick, saying that "we've seen time and time again that changes to copyright law have profound implications for online freedom of expression and human rights." "Frivolous copyright takedowns are already a huge problem for the next generation of artists and creators, streamers, gamers, and activists," Greer noted, advocating instead for what she called "a fair system that protects human rights and ensures artists are fairly compensated." Considering how artists and musicians "are suffering immensely during the pandemic," Greer added, "Congress should be working quickly to provide immediate relief, not cramming controversial, poison-pill legislation into budget bills to appease special interests." The way Congress jammed through these changes "is a total and complete travesty," said Masnick. "People should be mad about this and should hold the congressional leadership of both parties responsible." Calling on "House and Senate leadership to remove the copyright provisions from the continuing resolution and move them through regular order so we can have transparent and open debate about the right balance," Greer said that "these types of decisions should never be made in closed-door negotiations between politicians and industry or rushed through as part of some must-pass spending package."
Report typos and corrections to: corrections@rawstory.com.
READ COMMENTS - JOIN THE DISCUSSION