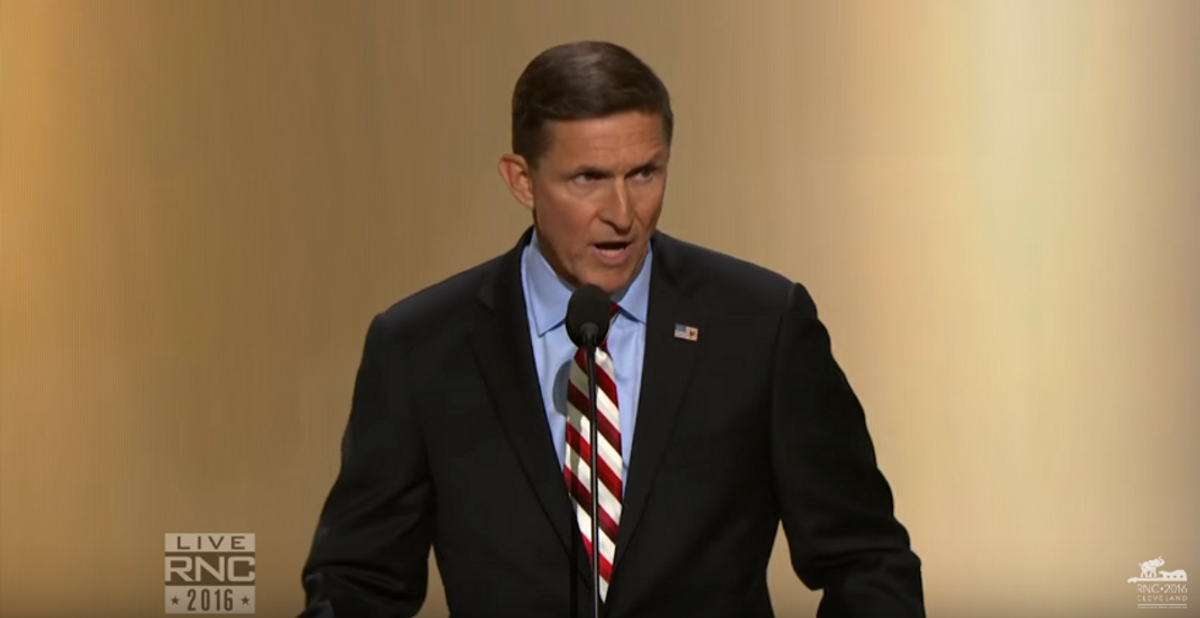 Michael Flynn is presented with a rifle as a gift in Yuba, CA, and says that now “maybe I’ll find somebody in Washi… https://t.co/rBd3JtlXvB
— Ron Filipkowski (@Ron Filipkowski) 1627224576.0

"I want to know why what happened in Myanmar can't happen here?" someone asked Flynn from the QAnon conference audience as others cheered.

"No reason. I mean, it should happen," said Flynn.

It's entirely possible that Flynn simply has a homicidal sense of humor or finds murder and the violent overthrow of the American government amusing.

Either way, it sent many to question why Flynn hasn't gotten a visit by the FBI to question some of his statements.

The comments come just a week after two shootings in Washington, one outside of National's Stadium and one in Logan Circle, less than a mile from the White House.

See the responses to Flynn below:

This is a matter of National Security. QAnon nut job Michael Flynn was holding an automatic weapon at a Christian… https://t.co/8H0rtTxWbQ
— coco coomber (@coco coomber) 1627250593.0

I sure hope the @FBI is looking into the authenticity of these purported comments from Michael Flynn! https://t.co/PvIs3w6e1X
— Christopher Kline (@Christopher Kline) 1627250902.0

@USArmy The enemy is Michael Flynn. You are complicit in the overthrow of our country as long as he represents the Army.
— p.endicott (@p.endicott) 1627247679.0

#MichaelFlynn has turned into an authoritarian. He’s a #grifter and will keep grifting until so-called churches sto… https://t.co/85XaeXawVu
— Janet Wagner (@Janet Wagner) 1627249084.0

Disgraced Traitor Michael Flynn should be behind bars and everyday he spends as a free man is a travesty to the Uni… https://t.co/UZPWUnUBsy
— Henry Djoutsa (@Henry Djoutsa) 1627250044.0