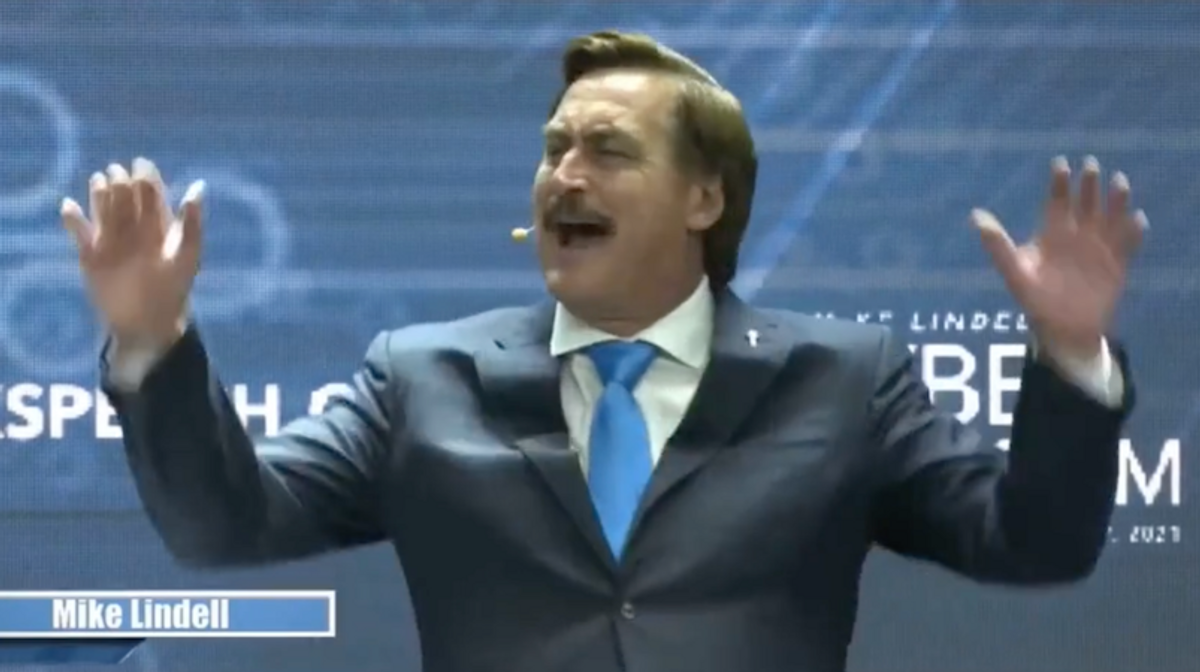 MyPillow CEO Mike Lindell came unglued Thursday on the final day of his "cyber symposium" in South Dakota, claiming that his long-promised evidence showing the 2020 election was stolen from Donald Trump has somehow been "compromised."

"I was physically attacked last night," Lindell said, referring to his earlier claim that he was attacked by "antifa" at his hotel, although no police report was filed.

"Why? Because I'm up here saying, 'Hey, we got a problem'," he said. "I've got all this evidence. They compromised that."

"You know what I had to do for three months?" Lindell continued. "I had to get on the 'bad news' and say, 'Hey, I'm not in Minnesota' to protect my family. I couldn't go home for three months and see my grandchildren. I had to buy a house that was in a protected gated community, when I had another house, where nobody knew where I would be. That took about a week and people would see me. It's very evil, everybody, but I tell you what, we cannot live in fear."

Lindell claimed others are not speaking out about election fraud because they're afraid of getting attacked or canceled.

"That's what this whole election was about all the way till Jan. 6," he said. "Now, anyone that wanted to say anything about the election, you better shut up or you're going to be brought away because you were part of something on Jan. 6."

"There's still people in jail for that, in prison I guess," Lindell said, apparently oblivious to the fact that hundreds of suspects have been arrested over the last seven months for their involvement in the Capitol insurrection. "I don't know for a fact, but I believe there is. You don't hear about it. You don't hear anything about that. I think it's strange you don't hear about that, other than they're building up to see. What are they building up? They're going to come get us all? People that weren't even there? I wasn't there. What a blessing, because they would have said, 'You were near there, we're hauling you in.' I'd have been the first one. I'd still be in jail with them. If it happened to them, it could happen to you. Nobody knows what happened there because they don't show us. ... They can feed us anything they want if they cancel our voice."

Since his evidence of election-fraud was apparently compromised, Lindell encouraged attendees to go back to their home states and demand that elections officials "open up those routers."

"If you push one thing, tell the machines, open up those machines and let's see what's inside them," he said. "Open up those routers. We demand it as a people. If you have nothing to hide, then open it up. And that's what we gotta do."