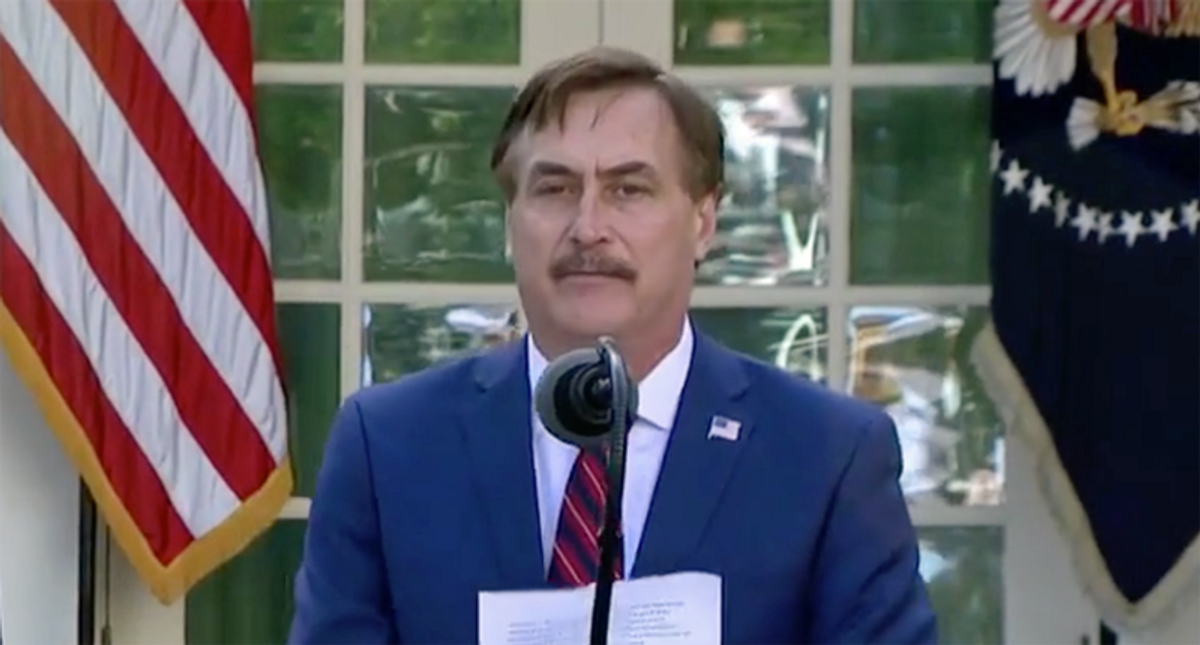 During the Bikers for Trump rally in South Carolina Sunday, My Pillow CEO Mike Lindell gave an hour-long meandering speech highlighting his history as a crack addict who found Jesus and became a millionaire pillow manufacturer.

"What is this ex-crack addict sitting next to the president? Jesus is real!" Lindell told the crowd.

Lindell went through a list of other things he thought were miracles from God, including a photo he saw of former President Richard Nixon shaking hands with Elvis Presley.

The photo he's referencing goes back to an unannounced visit Elvis paid to Nixon while in Washington after the musician decided on a whim, Smithsonian Magazine reported.

Elvis told Nixon that he wanted an honorary badge to be a Drug Enforcement Administration (DEA) officer. Then, the department was referred to as the Bureau of Narcotics and Dangerous Drugs. Nixon complied and handed Elvis the badge, but what followed wasn't exactly a miracle. Nixon not only resigned in disgrace, but Elvis spent the time that followed acting as an actual law enforcement officer against people he didn't like.

"With the federal narcotics badge, he [believed he] could legally enter any country both wearing guns and carrying any drugs he wished," wrote Priscilla Presley in her memoir, Elvis and Me.

Elvis' note to Nixon said that he'd be staying in Washington until he could get the badge.

Lindell went on to say that another miracle was that Dominion Voting Systems sued him for $1.3 billion because it drew more attention to him. He went so far as to imply that he intentionally attacked the company to garner news coverage.

"To get back in the news again, I want Dominion to sue me," said Lindell.

It's unclear what he's talking about as Dominion Voting Systems announced their lawsuit against Lindell in February.

The Wall Street Journal reported at the time that the legal complaint says, "He is well aware of the independent audits and paper ballot recounts conclusively disproving the Big Lie. But Lindell…sells the lie to this day because the lie sells pillows."

At the time, Lindell claimed he was excited by the lawsuit because "I have all the evidence on them." It has been several months and Lindell still hasn't shown that evidence.