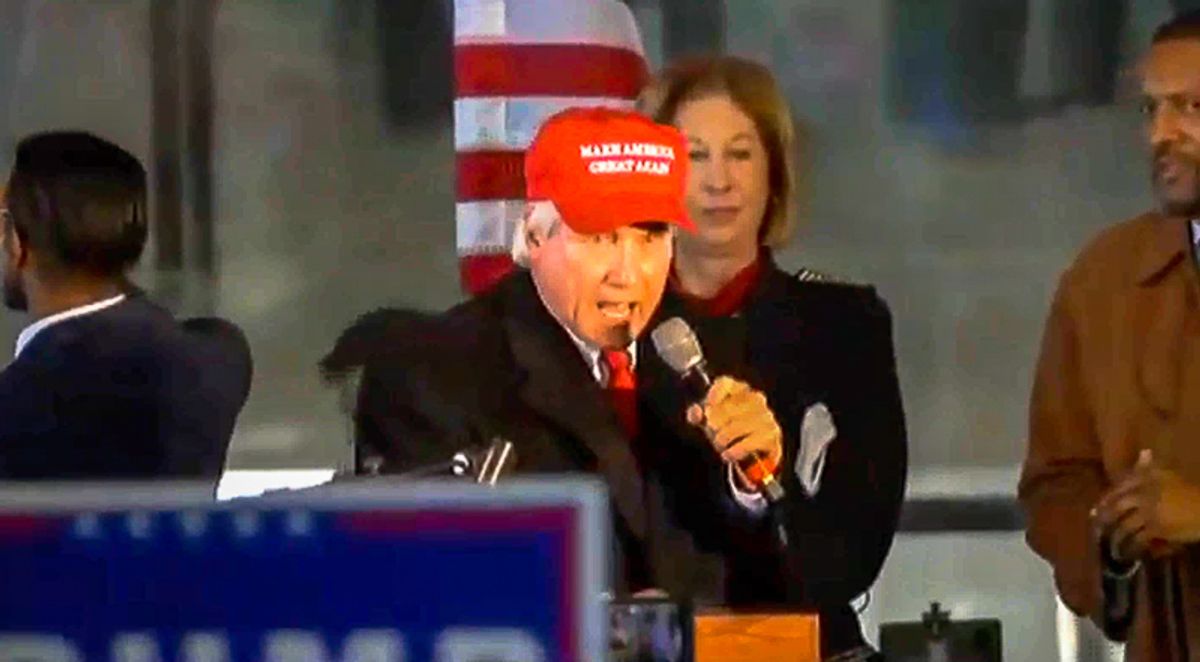 Hundreds of followers of QAnon who support President Donald Trump claimed over the weekend that a Nashville suicide bombing was actually a military operation to steal the election.

The complicated theory began circulating soon after an RV exploded in downtown Nashville. The Trump followers believe that the explosion was actually a missile strike aimed at destroying Dominion voting machines that were allegedly being audited at an AT&T facility.

Lin Wood, an attorney who challenged Trump's loss, advanced the idea that there is a link between AT&T and Dominion Voting Systems.

Because my name is Lucian, I have read about Saint Lucian of Antioch. He was falsely accused of heresy.

Was an AT&T data center in Nashville destroyed by the bomb yesterday?

Were AT&T cell or wi-fi signals which access Internet used in connection with Dominion voting machines?

Asking for a friend.

P.S. It is unlawful for voting machines to be connected to Internet.
— Lin Wood (@LLinWood) December 26, 2020

The ATT building in Nashville that was blown up today was owned by Cerebus Capital. Owners of Dominion Voting Systems,(the company many people are accusing of voter fraud) are former executives from Cerebus.

By Monday, thousands of tweets and posts on Parler made wild claims about the bomb. Some believed that a U.S. military missile struck the building while others linked the bombing to China. Some conspiracy theorists suggested that the bombing suspect was already dead when the explosion occurred.

"As Q says, there are no coincidences," one QAnon broadcaster said. "This explosion has a lot to do with the electoral fraud crisis that we're in right now."

Because my name is Lucian, I have read about Saint Lucian of Antioch. He was falsely accused of heresy.

Military black op missions going down in Nashville 🤔. I wonder if that was an nsa “patroit act" listening hub. I woner if it held dominion voting records. I wonder if anyones gonna watch the explosion in slow mo.
— AP (@DuffleBagBoi_50) December 28, 2020

Sounds about right. Covid made him try to destroy evidence at the AT&T building where Dominion machines were being held for evaluation. I hope the plan of Democrats failed.
— Caren D. (@CarenDaniel5) December 28, 2020

Total BS...Definitely Military-Grade Explosives intended to destroy evidence in the AT&T building.
BTW, why is AT&T conducting "the audit" and not a major CPA firm?
— "President-Elect" HL3 (@HL356876250) December 28, 2020

Dominion Voting systems were not to go online in any way shape or form because it would have been illegal to do so. Not to worry though, Dems can just blow up AT&T and wipe that evidence clean, and of course FBI has their back, suspect dead in explosion, End of investigation.🤬 pic.twitter.com/tbFn0Cjmp6
— 🇺🇸★ᴍɪᴄʜᴀᴇʟ★🇺🇸 (@MichaelT_45) December 28, 2020

And why was ATT in Nashville blown up? IT expert Hasland says Georgia Voting Machines were connected to China. Then ATT building that covers Georgia is blown up!https://t.co/Hw08N5Nqm1
— Bg G (@9bb2e5c43a21469) December 28, 2020

6) So, the explosion “just happened" to be at the AT&T location where they “just so happen" to control the cooling system for the super computer and house the dominion voting machines and drives for forensic audit.
— Mama Athelia 🇨🇦 (@AtheliaMama) December 28, 2020

It is a war on Christmas and this man is a terrorist for the democrats. Destroying At&t/dominion server evidence for voter fraud and this guy in the name of socialism gave his life for it, which means he is a terrorist. All socialist have a war on Christmas agenda, so here I am. pic.twitter.com/2hsuN6bcQ6
— Tonita (@mmariscal111) December 28, 2020

This guy was used. ATT hub server for TN and GA and Dominion information on server. Could be a dry run to knock down our communications so Left controls the message on TV. They want to bring in Communism. Pray! President Trump is fighting so hard for us to keep our freedom .
— Diana Weber (@Dianaweber123) December 28, 2020

Can ANYONE put two and two together? An audit by Hasland of Georgia Voting Machines says they were connected to China. Then the ATT building that covers Georgia is blown up! Was it to hide evidence of the China connection?????https://t.co/Hw08N5Nqm1
— Bg G (@9bb2e5c43a21469) December 28, 2020

Destruction of AT&T /Dominion server evidence of voter fraud and the MSM want to put the sole blame on this guy. Nice try. We are nit buying it. pic.twitter.com/ssKg8PAz7m
— Tonita (@mmariscal111) December 28, 2020

Destruction of AT&T /Dominion server evidence of voter fraud and the MSM want to put the sole blame on this guy. Nice try. We are nit buying it. pic.twitter.com/ssKg8PAz7m
— Tonita (@mmariscal111) December 28, 2020

A cousin in Nashville says the explosion was a missile strike, not a bomb. She says the actual target was the AT&T building, where voting machines are being examined. The goal was to destroy proof of election fraud. This is how fucking delusional Trump supporters are...
— Uncle Todd 🇺🇸 🇳🇱 🏳️🌈 (@unkltodd) December 28, 2020

Because you're not. The FBI is lying. It was not a bomb, it was a missle strike. A military missle. AT&T kept Domoninion Voting machines with evidence and they also Housed the NSA spying office that allowed them to listen in on phone conversations of any American using AT&T https://t.co/g58xO2PK7b
— Brian Shelton (@bkshelton1) December 28, 2020

Fake story. It was not the RV it was a missile strike on At&t building housing the computer cooling system. Also where the got the contract to audit the voting machines
— President-elect-Conway (@ConwayEsli) December 28, 2020

There was no bomber whatsoever, it's was a set missile specifically targeted AT&T building that was set to run a forensic test on Dominion Voting machines
— TFab (@GloriaAstra20) December 28, 2020

According to a report from the Charlotte Observer, a "limited number" of customers who went a Monroe, North Carolina Walgreens were mistakenly injected with saline instead of one of the COVID-19 vaccines.

The Observer reports that those who were given the wring shot were promptly vaccinated appropriately when they returned and will be kept on schedule for their second shot.