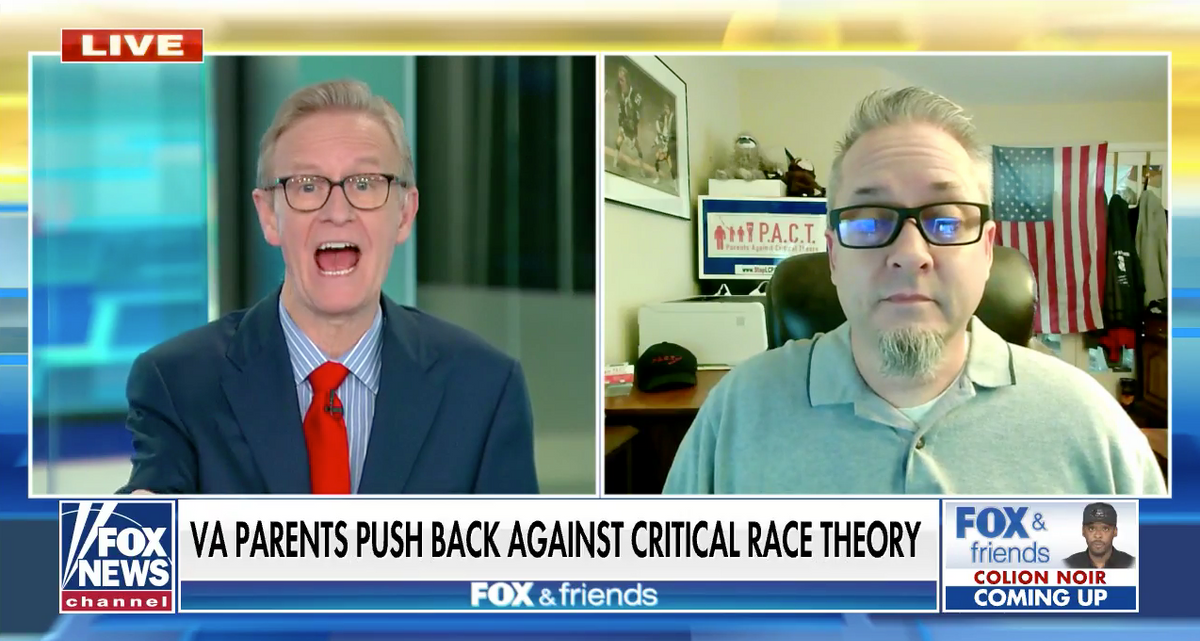 "A Virginia parents groups is fighting to keep critical race theory out of their classrooms in Loudoun County, Virginia," Doocy said. "They've released evidence that they say proves the controversial curriculum is being used in their schools." A spokesperson for Loudoun County Public Schools has previously told Raw Story that critical race theory is not taught in classrooms, and the nearly 5-minute segment providing Mineo with a national platform on "Fox & Friends" presented no evidence to the contrary.

On Thursday morning, the PACT website re-published an article that appeared two days earlier on the National Justice website. The article covers a protest led by Mineo's group that resulted in opponents of critical race theory and the district's transgender policy being arrested after the Loudoun County Sheriff's Office declared an unlawful assembly at a school board meeting that became unruly. While substituting a different headline, the PACT website otherwise re-published the National Justice article as a copy-and-paste, using the same text, including original links to mainstream and right-wing news outlets and a link to author Eric Striker's bio page.

Striker, whose real name is Joseph Jordan, is the editor-in-chief of the National Justice website, described by the Southern Poverty Law Center as a "junk news website." As the SPLC reported, Jordan helped found the similarly named National Justice Party in 2019, along with other contributors to The Right Stuff podcast, a hub for alt-right and white supremacist propagandists that played an influential role in generating interest for the 2017 Unite the Right rally in Charlottesville, Va. Jordan marched with the now-defunct neo-Nazi group Traditionalist Worker Party at Unite the Right, which erupted in clashes between neo-Nazis and antifascists, and resulted in the death of an antiracist activist who was murdered in a white supremacist car-ramming attack.

The Right Stuff "promoted the candidacy of Donald Trump in 2016 through podcasts and traffic in Holocaust denial and other antisemitic conspiracy theories," the SPLC reported, and its successor the National Justice Party similarly launched on "a platform shaped around a conspiracy theory suggesting that whites are being deliberately eliminated in the US."

The article published by Jordan and re-shared by PACT focuses on a Loudoun County Sheriff's Office major who is Black and who is seen in video of the arrest of one of the conservative protesters on Tuesday. The article baselessly claims that the enforcement actions by the sheriff's office are racially motivated, and signals distrust in Black police officers in a manner that hearkens back to the Jim Crow era, when Black law enforcement officers were restricted to policing Black areas and were not allowed to arrest white people.

"McDonald represents a relatively new breed of law enforcement officer that has been encouraged to selectively apply the law based on their political views or racial identity," Jordan writes in the article, without citing any evidence.

Reached by Raw Story on Thursday morning, Mineo indicated he was not aware of the National Justice Party's white nationalist and antisemitic platform.

"I don't know who this organization is exactly," he said. "I did a little research."

Mineo declined comment further on what he learned about the party, beyond a suggestion to look at the links in the article. As a basis for his reluctance to speak further, he cited his displeasure with a previous Raw Story article reporting on racist and anti-Muslim Facebook posts made on a Facebook alt account in 2017, arguing that it was irrelevant to his current activism opposing critical race theory. In an interview for that story, Mineo did not deny being the owner of the "Vito Malara" Faceobook account and acknowledged authorship of some of the posts.

Roughly 10 minutes after Mineo spoke with Raw Story on Thursday, the National Justice article was removed from the PACT website.

Posting on the "Vito Malara" account, Mineo has previously floated a conspiracy theory on Facebook that Unite the Right was contrived by shadowy left-wing operatives. Sharing a Breitbart story that notes that Unite the Right organizer Jason Kessler at one time supported President Obama, "Vito Malara" wrote, "There's always more to the story when Liberals get all bent out of shape."

The Facebook post magnified the significance of Kessler's earlier support for Obama, while omitting any mention that later his political views took a hard-right turn that led to him joining the Proud Boys and convening a coalition of white supremacists to rally around the Robert E. Lee statue in Charlottesville.