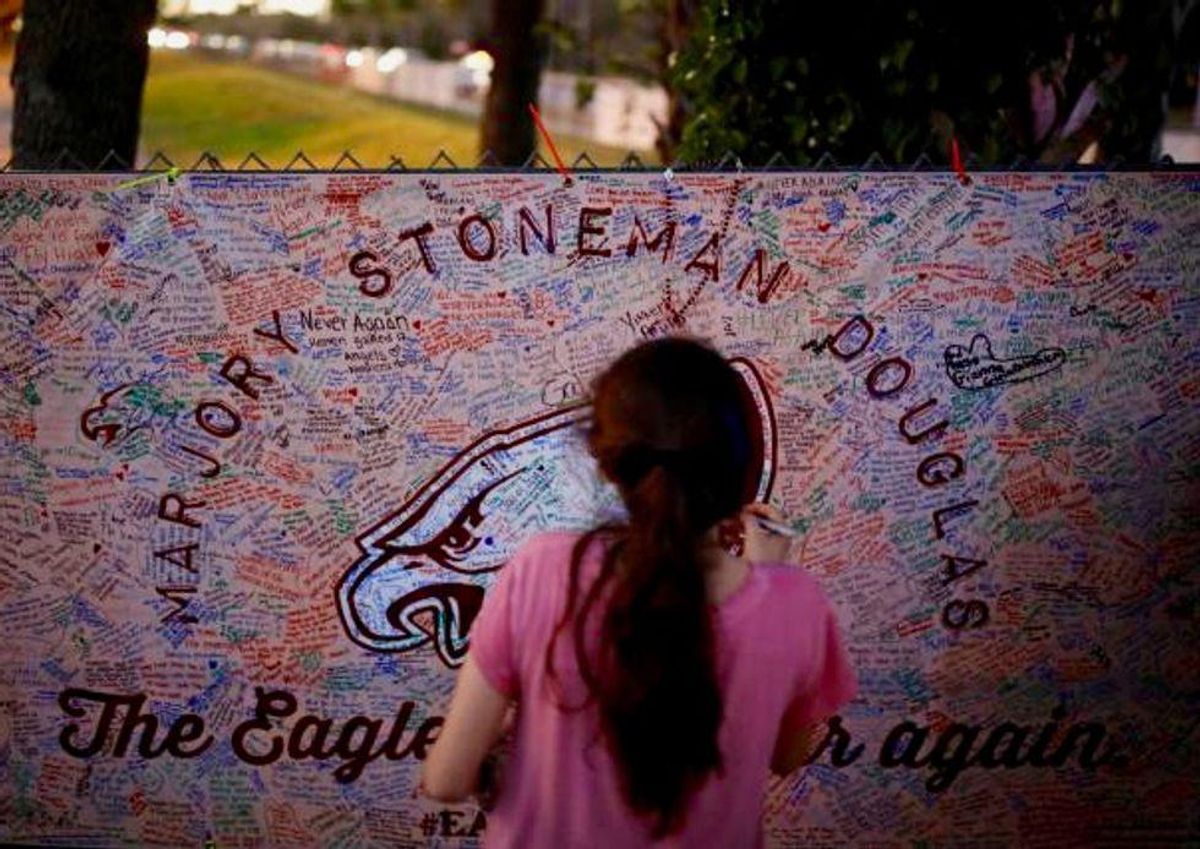 A girl writes a note on a banner placed on the fence of the Marjory Stoneman Douglas High School to commemorate the victims of the mass shooting, in Parkland, Florida, U.S., February 21, 2018. REUTERS/Carlos Garcia Rawlins

Last month, an anonymous Reddit user with a throwaway account posted in r/QAnonCasualties, a Reddit group for people whose spouses, family members and loved ones have been consumed by the baseless conspiracy theory known as QAnon. QAnon, for the uninitiated, posits that American politics are dictated by an elite, Satan-worshipping pedophile cabal which Donald Trump and his inner circle opposed.

Most QAnonCasualties posts take on a tone of desperation — heartfelt sagas of loved ones who have become unmoored from reality, and for whom the outlandish conspiracy theory is the ultimate truth. This post in particular hit on those tropes, but with an added twist: "I survived the Stoneman Douglas school shooting and my dad is suddenly convinced I'm a liar and part of a false-flag operation," the pseudonymous poster wrote.

"I think my dad has gone f***ing insane; It's going way too far and I have trouble processing the last 5 months. He's always been very conservative, but now QAnon has consumed his life to the point where it's tearing our family apart along with my mental health," the Reddit post said. "Back in January he saw the video of Marjorie Taylor Greene harassing [fellow high school student] David Hogg about the shooting being a false-flag operation, and while my dad was already into Q, he'd never gone down that particular rabbit hole and now he's convinced everything was a hoax and it breaks my f***ing heart."

As Salon has previously reported, QAnon has torn apart marriages and families; hence, the creation of the aforementioned Reddit forum, which has become a digital support group for nearly 179,000 people who swap stories, advice and guidance. Some posters describe the experience of completely "losing" their loved one. Others are more alarming, like the woman whose "Qhusband" got a gun license because of the conspiracy, which made her feel "sick to my stomach." But this user sheds light on how the cult-like group can brainwash family members of those who have firsthand experienced a horrible national tragedy, like the Stoneman Douglas school shooting, which left 17 people dead in 2018.

Last week, Vice spoke with the author of the Reddit post and confirmed their identity as a survivor of the Parkland, Fla. shooting; the author spoke on the condition of anonymity using the name "Bill."

"It started a couple months into the pandemic with the whole anti-lockdown protests," Bill told Vice. "His feelings were so strong it turned into facts for him. So if he didn't like having to wear masks it wouldn't matter what doctors or scientists said. Anything that contradicted his feelings was wrong. So he turned to the internet to find like-minded people which led him to QAnon."

It's an interesting and tragic tale, and at odds with how parents of Sandy Hook's victims responded when far-right conspiracy theorist Alex Jones tried to convince his followers the massacre was a hoax. Joe Kelly, a cult intervention specialist, said trauma affects people differently, and straight-out denying an event happened — like your son almost dying in a school shooting — could be one way to cope.

"When it's not dealt with by a trained individual, people will start to scattershot trying to find help in any form," Kelly said. That can put someone in a vulnerable position where they can be taken advantage of by a group like QAnon with toxic agendas. "They will say this is because of this, and they'll touch on that moment, and you'll feel heard, you'll feel appreciated and understood, finally, for the first time in that moment of vulnerability."

From that point on, Kelly said, this group that's provided "comfort" and "assuredness" starts to take control of the traumatized individual.

Doni Whitsett, Clinical Professor Emerita of Social Work at the University of Southern California who specialized in cults, said via email that "denial is a great defense against feelings that are uncomfortable, in this case, feelings of powerlessness [and] helplessness."

"These are feelings that actually define what is meant by a trauma," Whitsett said. "This is part of the personality profile of those prone to believe in conspiracy theories."

As numerous psychologists previously told Salon, some people are prone to conspiratorial thinking. These types are unlikely to recovery from their QAnon beliefs, and, if not QAnon, would likely have been drawn to other conspiracy theories.

"I'm glad the QAnon casualty community is helping 'Bill' leave the situation, because sometimes that's all you can do," Whitsett said.

As Bill noted in his Reddit, it doesn't help that prominent politicians, like, Marjorie Taylor Greene, R.-Ga, perpetuate the falsehood that the shooting was a hoax. In part, Kelly said, the continuing existence of these falsehoods is the fault of far-right leaders like Greene.

"Leadership allows for this to continue to take place — they've never come out and outright said this stuff is garbage, right?" Kelly said. "And this is dangerous, and that's exactly what we see in cult leaders."

Kelly, who has worked as a cult interventionist for nearly 30 years, said some are drawn to QAnon because it fulfills a specific need — in some cases, loneliness. In other cases, they may be struggling with other demons that make them susceptible.

"You'll have people who were struggling, for lack of a better word, with mental health issues — they could have been minor, and yet during pandemic, they became isolated, then surrounded or bathed in liquid that QAnon became," Kelly said. "It fills the brain, and that suspended judgment becomes solidified faith and belief . . . these things are all reinforced by this new community you meet online, and you don't have to get to know these people — their nuts and bolts and where the warts are — these are just faces behind the screen, promoting an ideology [for which] now you're a prophet."

And that, Kelly said, is how someone who nearly lost their son in a national tragedy could disbelieve what happened right in front of them.