Watch: Pro-Trump pastor prays for electricity to 'turn itself off' as rancorous scene unfolds outside Knoxville drag show

KNOXVILLE, Tenn. — Greg Locke, a far-right Christian nationalist pastor in Tennessee who has railed against COVID-19 restrictions and supported Donald Trump’s effort to overturn the 2020 election, prayed for a power outage during a protest against a drag performance in Knoxville on Thursday evening.

“I pray that when that show starts tonight, the electricity would turn itself off, and the sound would glitch, and the lights would go out, and it would be such a debacle that this theater in Tennessee would recognize we should have shut this thing down long before we even got to this point,” Locke said, as his street sermon across the street from the Tennessee Theatre reached a fevered crescendo.

Locke’s remarks echo the rhetoric of Emily Grace Rainey, a former US army psychological operations officer, who said a sniper attack that took place during a drag show in Southern Pines, NC earlier this month resulting in widespread power outages was divine retribution.

Rainey initially posted on Facebook: “The power is out in Moore County and I know why.” Later, she wrote that she told Moore County sheriff’s deputies “that God works in mysterious ways and is responsible for the outage.”

The protest against the traveling Drag Queen Christmas show in Knoxville drew about 200 protesters, including 10 members of the Proud Boys dressed in customary yellow and black colors and a man wearing a skull mask associated with accelerationist neo-Nazis.

Locke, who leads Global Visions Ministries, put out a call on social media two days earlier to "rise up church," and "stop being passive and stand up for righteousness." A white power group forwarded Locke's message on Telegram

The protesters were almost evenly matched in numbers by supporters who thronged the block in front of the theater, including armed members of the John Brown Gun Club, a leftist group, who were equipped with tactical gear and radio communications devices.

While protesters prayed and spoke in tongues across the street, supporters chanted, “You’re a cult, you’re a cult,” and, “Two, four, six, eight, teach our children not to hate.” Although the dueling protests became tense at times, including once when a drag supporter crossed the street and was denounced as a “witch” by another street preacher, the evening remained largely peaceful. 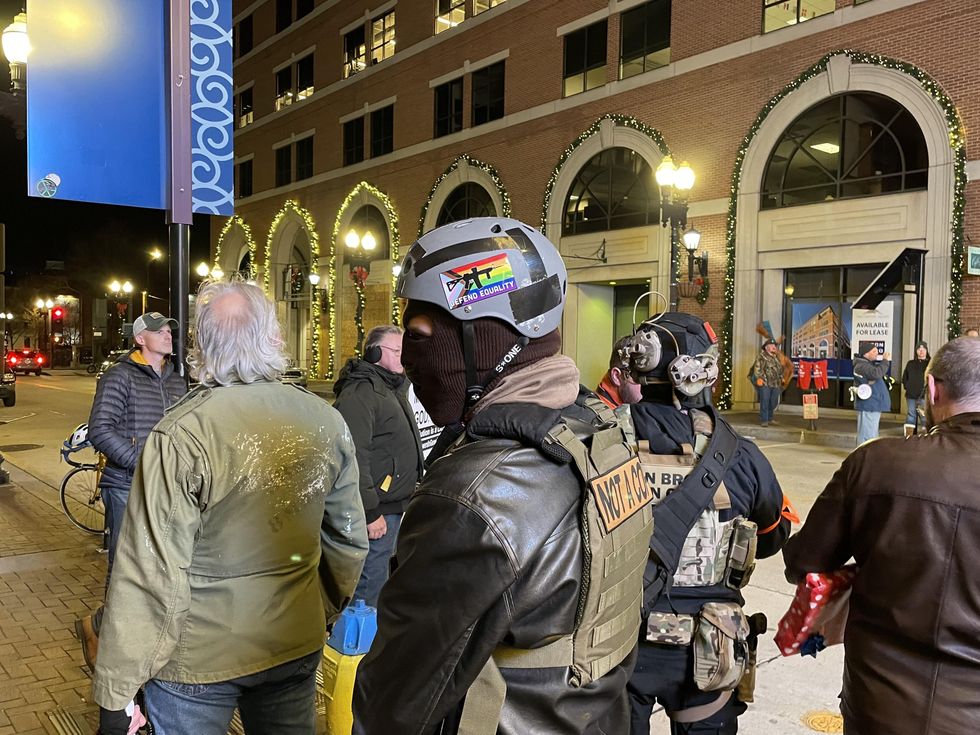 Members of John Brown Gun Club stand at the edge of a group of supporters.Jordan Green