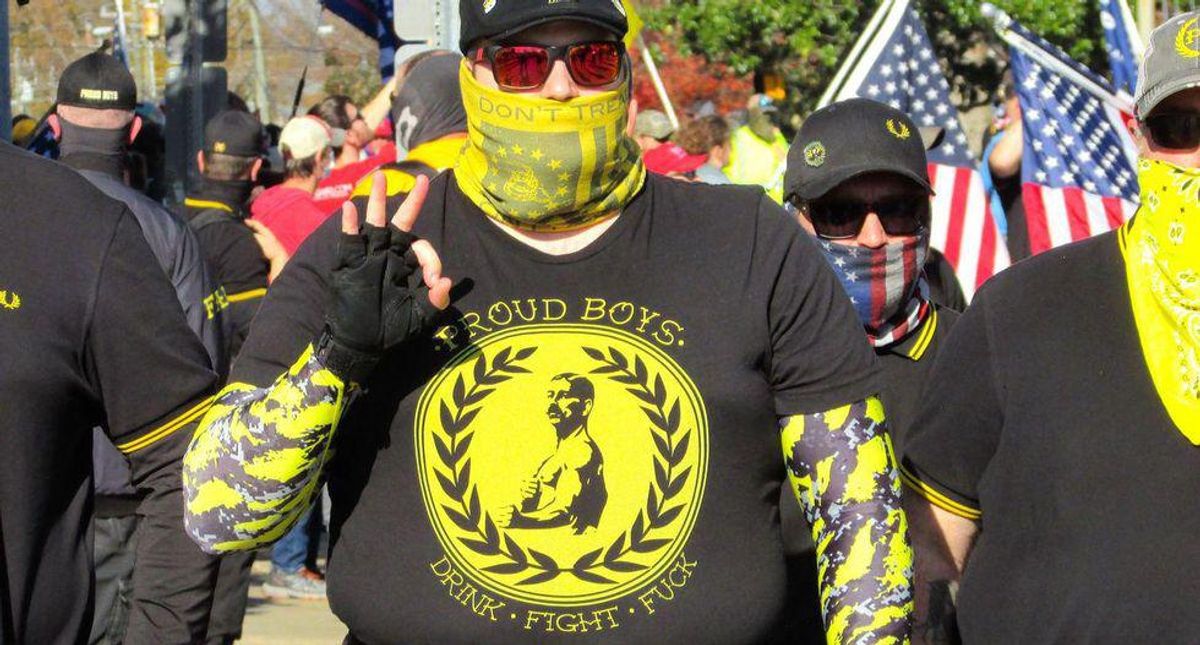 In interviews with USA Today's Will Carless, three men with ties to the Wisconsin chapter of the far-right Proud Boys confessed that they expected something more along the lines of a drinking club when they joined up -- only to find the organization riddled with racism, homophobia and some members glorifying murder and rape.

According to 40-year-old Army veteran Daniel Berry, a friend at a Wisconsin VFW recommended the Proud Boys to him by pointing out, "The group was vocal in its support for then-President Donald Trump, whom Berry had voted for. They called themselves 'Western chauvinists' and said they welcomed true men. That sounded about right for Berry, who considers himself a dyed-in-the-wool patriot," so he checked them out and sent them an email.

What he found later -- after being invited into a private chatroom -- disgusted him.

"Berry and two other men, who asked not to be named because they fear violent repercussions from members of the Proud Boys, provided a unique view into an organization that has become a magnet for racists and violent extremists," the report states. "Their accounts reveal the face of a group that masks itself as a harmless, multiracial drinking club, one that reaches new members by preaching free speech and patriotism. At least in Wisconsin, the men said, the Proud Boys stands less for brotherhood and more for the racial hatred espoused by outmoded organizations like the Ku Klux Klan and Aryan Nations."

Calling the Proud Boys a "cult," Berry said he expected to find discussions about national security and red-meat conservative issues like gun rights.

After joining, a visit to a second chatroom revealed an entirely different organization.

"Participants in the chatroom didn't use their real names. But upon joining, applicants were required to send Proud Boys leaders a copy of their state-issued ID cards," the report states, marking the next step to acceptance.

Then came a link to a Telegram chatroom.

"The second chatroom was swamped with every type of shocking content imaginable, the men said, with participants posting photos and videos of people getting killed and seriously injured. Users swapped the most explicit pornography they could find, often featuring people defecating. The images flowed in a septic tide of racist, antisemitic and homophobic banter," Carless wrote.

According to one of the other recruits who asked that his name not be revealed, "Videos of Muslims being set on fire or blown up? Check. Memes intended to laugh at Holocaust-era Jews? Check. Pictures of women being raped? Check. Memes poking fun at raped women? Check. I could go on, but you get the point."

Berry -- who quit the group -- added that protestations against the content were met with scorn ("Fit in or f*ck off") and it was best to remain quiet.

"And so it was in your best interest, if you want to stay with the group, to just roll with what they were saying, and basically get on board with that inflammatory stuff," he explained.

With the report noting that the Proud Boys have found fertile ground recruiting young, white loners looking for acceptance, Samantha Kutner of the Intuitive Threat Assessment, which specializes in studying violent extremism, said the Wisconsin group is not an outlier when it comes to violent or racist rhetoric.

"It's true that for some Proud Boys, involvement might be just meeting up once a month with the boys and drinking and complaining about the wife and then going home," she explained. "But when you look at the group as a whole, and its aims, they are a violent, crypto-fascist, extremist organization."

As for Berry, who quit five months ago, he revealed he "heard from someone inside the Wisconsin Proud Boys that his life has been threatened. He stopped leaving the house when his wife is home. He sleeps during the day and keeps vigil at night, walking the perimeter of his property and relying on his guard dog to warn him of intruders."

I was in the wrong, not just in joining the group, but the things that I did," he admitted. "I did this to myself, and I am not the good guy here."