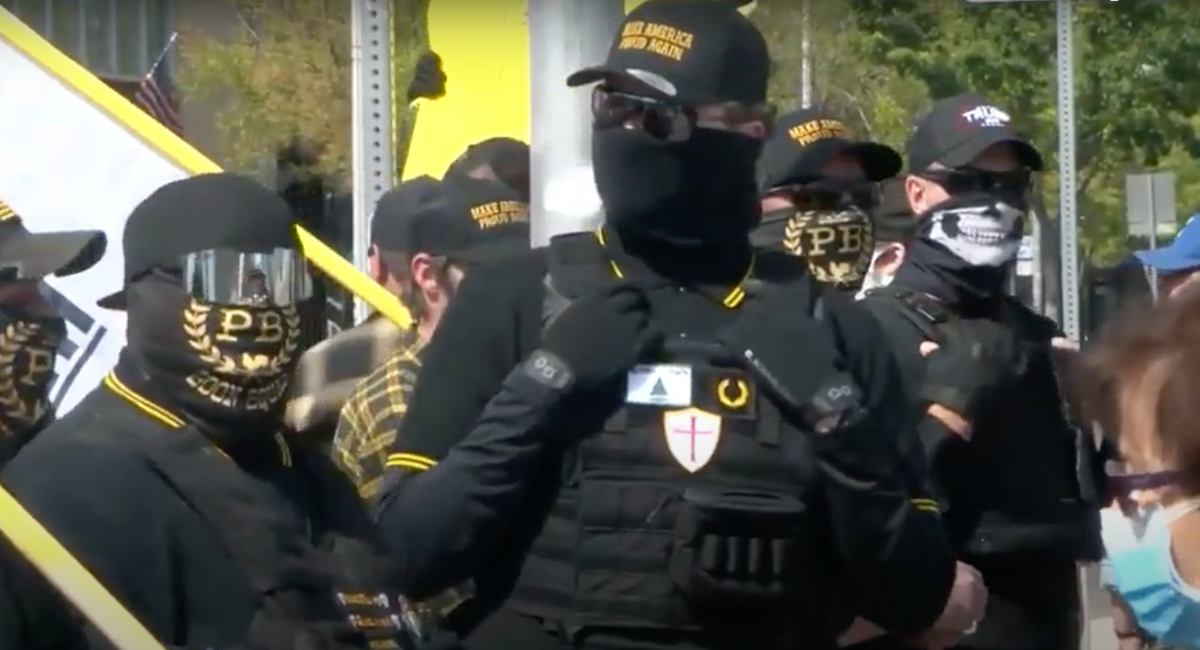 Founded by Gavin McInnes as pro-Trump men's drinking club in 2016, the Proud Boys transformed into the paramilitary vanguard of the MAGA movement in late 2020, providing security for campaign rallies and then playing an outsized role in the Capitol insurrection.

California's Central Valley, where at least three active chapters feed members into flashpoints of conflict up and down the Highway 99 corridor, provides an example of how the Proud Boys remain a polarizing force in the culture wars that are rending the United States.

This is the third installment in a four-part series focused on post-Jan 6. MAGA activity in California's San Joaquin Valley. You can read other installments in the series here.

In early April, an estimated 50 or 60 Proud Boys and other far-right allies reportedly showed up in Fresno kitted out in ballistic vests and equipped with hunting knives and bear spray. Facing off against local residents demonstrating to preserve an iconic theater at the center of an LGBTQ-friendly neighborhood, one Proud Boy allegedly shoved a pregnant woman to the ground. Mark Mazzola, president of the Fresno chapter, confirmed to a local news outlet that his group received reinforcements from Modesto and Bakersfield.

Weekly protests against the pending sale of the Tower Theatre began in February. The owner is currently leasing the theater to the proposed purchaser, Adventure Church — part of the Foursquare denomination, an evangelical Pentecostal spinoff — for Sunday services. Local residents organized under the banner of Save the Tower Theatre Demonstration Committee oppose the sale on grounds that the church violates the commercial zoning for the property and that it represents the loss of an important facility in the heart of one of the Central Valley's few LGBTQ-friendly areas. In the past, the theater has been used by an array of performing arts groups and has hosted Reel Pride, Fresno's LGBTQ film festival.

Understanding the neighborhood anchored by the Tower Theatre is crucial to appreciating why residents are so strongly opposed to the sale to Adventure church, said Jaguar Bennett, a local comedian and community theater actor. He compared the Tower District to a small-scale Berkeley or Greenwich Village.

"Tolerant, inclusive — we believe in diversity," he said. "We believe in art. We believe in living your own life. We are kind of a beacon, not just for Fresno, but the entire region. The Central Valley is the most conservative part of California. The Tower District is the most LGBTQ-affirming neighborhood. Between Sacramento and LA, this is it. We're a safe space for LGBTQ youth. You can see a play. You can see a band. You can shop in a thrift store. You can have a nice meal. You can do it all in three blocks."

Following the April 11 debacle, the police increased their presence at the weekly protests, and established a separation between the opposing groups. Since then, Bennett said, the Proud Boys haven't been a problem.

One of the Fresno members framed the Proud Boys' opposition to the Save the Tower Theatre committee as a matter of preventing the progressive values of the Bay Area and Los Angeles from creeping into the Valley.

"Those places are cancer," said Chongo, the nickname for the Fresno chapter's sergeant at arms, during an April 1 interview with conservative podcaster Todd Cotta. "If we don't protect the Central Valley, our farmland areas, that cancer's gonna spread here. Then, next thing you know, California's a disaster.

"We need to fight that fight," he continued. "What I mean by that — it doesn't have to be physical. It's always going to be the last resort, but we've got to stop that before it hits here. And we're doing something in the Tower District…."

"If anything, we are defenders of this country," Chongo said. "Somebody's gonna stand up. Somebody has to stand up. Because if we don't, this country's gonna burn. The cancer is already spreading into this community. It's gonna hit the rest of the Central Valley. You got LA and San Francisco in ruins."

Fresno cracks down on Tower Theatre protests after two arrests, one hospitalization www.youtube.com

On the issue of the Tower Theatre, Chongo told Cotta the Proud Boys got involved as a matter of supporting religious freedom.

"Well, we're just standing up for it because we believe it's a freedom of religion, which is our right as American people," he said. "Say the Tower Theatre loses, and they don't get their church. Well, there's a church just north of the Tower Theatre — they're gonna go after that church? I have a Bible study on Fridays. Pretty soon, they're going to come after where I have my Bible study, and I can't have it."

Bennett said there's no merit to any argument that the church losing the fight for Tower Theatre would be the first domino in a sustained assault on Christendom across the region.

"In a region as conservative as Central Valley, even our freaky people are not indisposed to religion," Bennett said. "There are plenty of churches, and many of them are LGBTQ-affirming. I don't even think anyone would care if this church would have even bought a building in our neighborhood that was properly zoned."

It's common to hear Proud Boys across the country ardently argue that they are not homophobic.

Addressing Modesto City Council on June 22, a Proud Boy who identified himself as "Eric" attempted to deflect criticism of the group by saying, "We love anybody of any sexual orientation."

Apparently unaware that crossdressing is not a sexual orientation, he continued: "In my chapter alone, we had a transvestite, happily, loved him."

"We welcomed him openly," he said. "We only removed him after we discovered he started using methamphetamine, because that's something we don't allow. Because as Proud Boys, we believe in upholding the Constitution, the American family, as well as the nucleus [sic] family, which the left is tearing apart."

Beyond the fact that the Proud Boys were started as a drinking club, allegations of members' drug use, including from one-time ally Omar Navarro, have proliferated for years, and Chairman Enrique Tarrio once said, "We're pro-drugs." Also, Eric's claim that the left is "tearing apart" the nuclear family aligns with a view that heterosexuality should be regarded as normative rather than promoting inclusion.

"They want to build a society that is built on hierarchy, one that strengthens existing hierarchies and that perpetuates inequalities that we have," said Cassie Miller, a senior research analyst at the Southern Poverty Law Center. "They believe that men are superior to women, that cisgender people are superior to transgender people. Really, strengthening the social stratifications that exist — that underlies all the political projects that they pursue."

Beyond counter-protesting the LGTBQ community and allies, Proud Boys in the Central Valley have forged an alliance with Don Grundmann, an anti-gay crusader from the Bay Area who is gearing up for his third annual Straight Pride rally outside of Planned Parenthood in Modesto in August. Although they distanced themselves from the first Straight Pride rally in 2019, the Central Valley Proud Boys showed up to support Grundmann in 2020. Another group calling itself the Central Valley Militia unfurled large banners reading "Patriots Against Pedophilia: One Solution Luke 17:2" alongside an image of an assault rifle. Whether intentional or not, the message could be read as a conflation of homosexuality with pedophilia, with a clear call for violence.

Grundmann came to the June 22 Modest City Council meeting to publicize his event and defend the Proud Boys, whom he credited with providing security at the 2020 event; the Proud Boys have been regularly attending city council meetings to express opposition to a city-sponsored effort to improve police accountability.

"These are Christian gentlemen who want to defend the foundations of our nation," he said. "I believe that's fantastically important." Ironically, the Central Valley Proud Boys organizer quoted in the Modesto Bee's coverage of the 2020 event identified himself as "Odin," which is the name of a Norse god that is revered in the modern religion Heathenry. Meanwhile, Grundmann's National Straight Pride Coalition openly flaunts its homophobia, with a manifesto on its website describing the organization as "the frontline of the religious war between Christianity and its Satanism/Humanism opponent," and as readying for a battle "to stop the Jihad of the LGBT War Machine upon the children of our nation."

Although Grundmann denies being a white supremacist, "Caucasians" are singled out, along with "Western Civilization," on the National Straight Pride Coalition website as being "under unprecedented, sustained and coordinated attack within our society, culture and nation." Grundmann made national headlines when he made a gaffe while addressing Modesto City Council in 2019. The audience erupted in laughter when Grundmann, evidently flustered by sustained booing, said, "We're a totally peaceful racist group."

Beyond the Central Valley, Proud Boys also showed up to protest a meeting of the Los Alamitos USD School Board in Orange County as it approved new social justice standards. The Orange County Register reported that Superintendent Andrew Pulver switched the meeting from in-person to virtual because of concerns about potential unrest. In previous weeks, a proposal to add an elective ethnic studies class — also ultimately approved — had drawn protesters. Chad Loder, an antifascist who monitors Proud Boys and other far-right actors in southern California, identified a member of the Bakersfield Proud Boys chapter at the May 11 protest, along with Marcus Kelly, who was previously arrested in Fresno for illegal possession of pepper spray while rallying alongside the Proud Boys.

Miller said two important things are at play in the Proud Boys' increased engagement with local issues. Getting people involved in local politics has been a historical strength for the political right, providing opportunities for Proud Boys to build coalitions. And culture war issues offer a ripe opportunity for organizing.

"One of the things we saw as a flashpoint in the past was drag-queen story hours," Miller said. "Drag queens would read to children in libraries. This became really a point of organization for the far right, with Proud Boys going to community meetings and pushing back against this kind of programming. They realize this is a real flashpoint for the culture war. This will bring them attention and recruits."

This is the third installment in a four-part series focused on post-Jan 6. MAGA activity in California's San Joaquin Valley. You can read other installments in the series here.