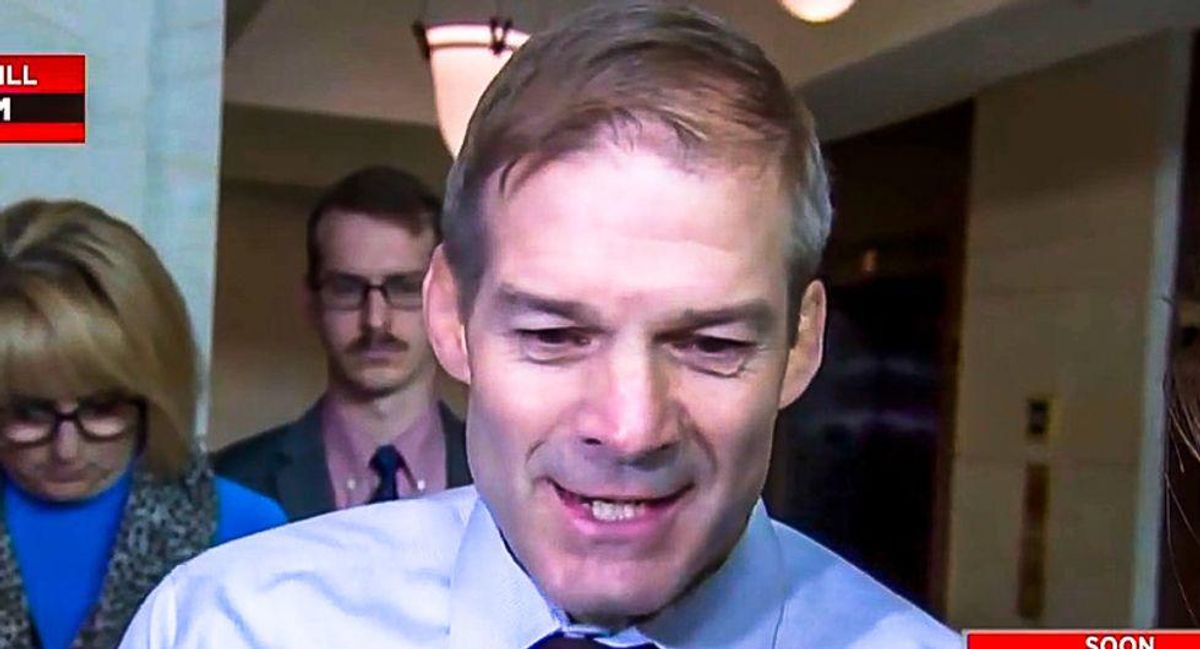 United States Representative Jim Jordan wrote the following to accompany a video of University of Wisconsin students going wild before the opening game of the college football season: "Real America is done with #COVID19. God bless!" the Ohio Republican tweeted. I'm confident he didn't mean to, but Jordan has provided us with perhaps the best illustration of what it means to be an American fascist today. Unfortunately, most people most of the time won't see it. Jordan's tweet appears all-American! It's not, though. It's anti-American.

When Republicans say "Real America," they have in their heads a very specific place. It's not a real place, as I said. It's a wholly imagined place that, as such, frees them from moral accountability and all manner of mutual obligation to anyone who is not already committed to this wholly imagined place. It is a confederacy of the mind and spirit, unbound by tangible boundaries, a "nation" existing inside the actual United States, where "real Americans" live as God's chosen people.

In Real America, as opposed to the real America, social relationships and political power are structured according to "the way things are," according to "the natural order," according to God's will. As such, God rules over Mankind, men rule over women and white Christian men rule over everyone else. To GOP confederates, this is not their doing. It's God's. As such, anything that threatens ordered power threatens God and is deserving of any kind of response necessary to defeating it.

All this is fine, as far as it goes, except this wholly imagined "nation" exists inside a real nation that everyday threatens the confederacy just by being what it is: democratic, capitalistic and liberal. Democracy, capitalism and liberalism are dynamic and fluid. They erode, whittle and slam into the orders of power every hour of every day. They doubt the lies "real Americans" tell themselves about being "real Americans." For this reason, these "real Americans" are in a constant state of crisis.

At the same time, this wholly imagined "nation" can't live without the real nation that it exists inside of. For one thing, it's imaginary. It does not really exist. For another, it really can't exist independently, not in the 21st century, not when the economy is global, not when so many of the limitations humans have lived with for centuries have been eased or erased thanks to advancements in technology. It can't live with democracy, capitalism and liberalism. It can't live without them either. So the chief goal of this parasitic "nation" is striking a difficult balance between the preservation and perpetuation of the authoritarian collective without killing off the democratic host that's necessary to the preservation and perpetuation of the authoritarian collective.

That "Real Americans" live in an imagined "nation" inside of a real nation is why someone like Jim Jordan, a Republican from Ohio, can give voice to the politics of that imagined "nation" without residing in what had been the states formerly constituting the Confederate States of America. Those states, however, are still where the politics of the old top-down authoritarian collective are currently felt most acutely.

It should be clear, therefore, it's no coincidence that southern states like Florida are sabotaging the real America's recovery from the covid pandemic. It's no coincidence that southern states like Texas are reviving the confederate practice of nullification — canceling laws and court precedents (think Roe) that they don't like. It's no coincidence that representatives of southern states are leading calls for the president's resignation after American troops were killed by suicide bombers in Afghanistan. All of these are treasonous, but the GOP confederates don't think so. Their highest loyalty is not to the real United States. It's to a wholly imagined authoritarian collective of God's chosen people. In their minds, the varieties of disloyalty — sedition, betrayal, sabotage, insurrection, etc. — are in the service of their love of a make-believe "nation." Where you see an attempted coup d'etat, they see a patriotic attempt to take back "their country."

Jim Jordan's tweet might sound all-American. It's not, though. It's a threat swaddled in rah-rah-rah. The pandemic isn't over. It's changing. The virus is mutating. It is becoming more contagious and more lethal. And yet, according to Jordan, "Real America is done with #COVID19." The GOP confederates hate the real America. They are willing to do anything to stop it from "taking over." Even prolonging the pandemic.