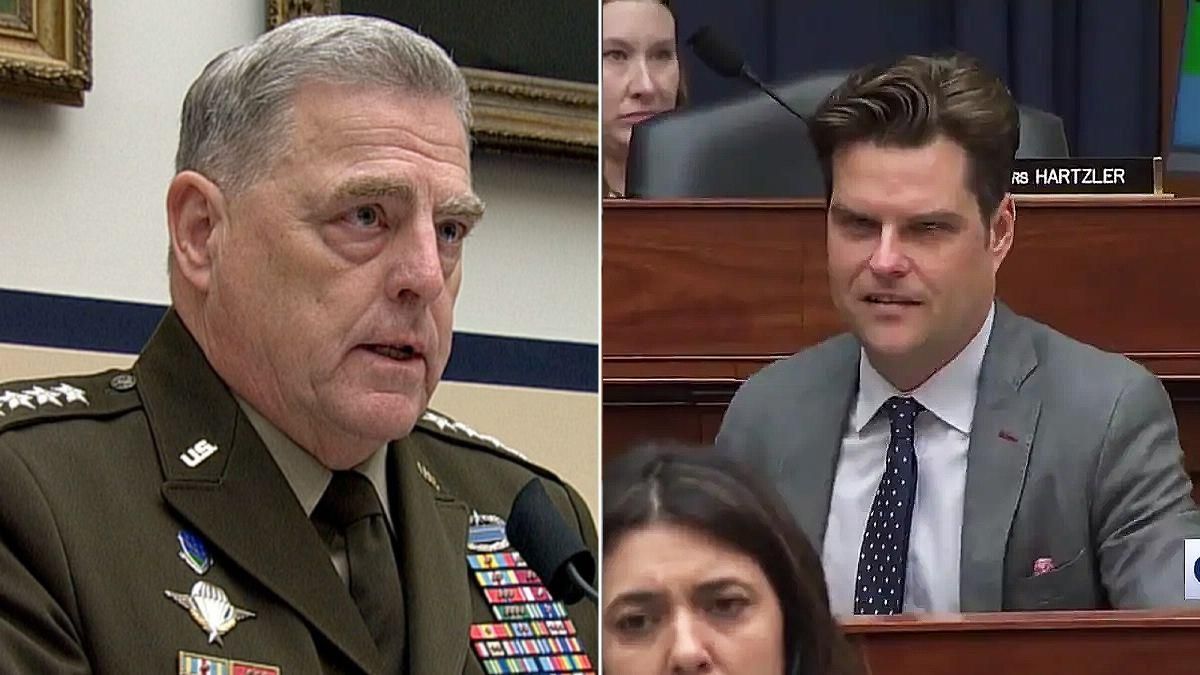 Paul Rieckhoff of Righteous Media, explained that this is probably not the best argument for the Republican Party to make.

"The culture war led by members of the GOP has now fully bled into the military," said Rieckhoff. "Our troops, military leaders under political attack not by ISIS but by radical extremist anti-American elected officials, pundits and other blowhards putting themselves and the personal agenda ahead of our country. Our enemies are celebrated. Attacking a respected combat leader with integrity and honor by Matt Gaetz, who is a coward and probably should be in jail. This is how far it's gotten and political suicide for the Republicans and drivers independents and moderates running from the Republican Party. This is their equivalent of defunding the police and it will have the same reaction from the middle of the country."

Kevin Baron of Defense One explained that this isn't the first time the GOP has decided to attack the military.

Most recently, the GOP may be after Gen. Milley, but a few weeks ago it was Sen. Ted Cruz (R-TX) attacking the military, implying that they are weak and "emasculated" because they aired an ad showing a woman trained on missile defense in the military having gay parents. Cruz has never served in the military.

Before that, Fox News' Tucker Carlson did a commentary also attacking the military because a pregnant fighter pilot was able to get a maternity fighter suit. The Air Force spends millions training fighter pilots each year, so cutting one out because she's "showing" isn't something the military does.

Before that, it was former President Donald Trump attacking late Sen. John McCain (R-AZ) because he was captured in Vietnam and served the rest of his time as a prisoner of war. Then Trump attacked the parents of a Gold Star recipient who died in combat because he was Muslim.

"It's the same argument I have heard about women in combat, about transgender troops, gays in the military back to the integration of African-Americans in the military in the '40s," said Baron. "The idea to directly attack the Joint Chiefs is new and is different. I think there's a little bit of nuance to say we all know the critical race theory story is in part a charade for racism. All right? It is a lot of the pushback of a year by white Americans who feel, 'Wait a minute! I'm not all the horrible things. Why do you teach this thing?'"

He explained that what happened yesterday wasn't even about Gaetz but about Rep. Mike Waltz (R-FL) who is a Green Beret, the only one in Congress, who complained that it was betaught at West Point. The exchange "was pretty benign," said Baron. Milley caused fireworks when he said that a lot of things are taught at West Point, and they should be, because he too wants to understand why "white rage" is where it is and why people felt like it was acceptable to attack the U.S. Capitol and try and stop an election.

"So, Paul's right," he closed. "There's a lot of troops who are seeing the boss be attacked by a partisan firebrand and troops are saying, 'We don't want to do this' or 'Why are we being put through this?' It seems to me like Gaetz is on kind of a wrong side of history to these similar examples in the past with the politicians."