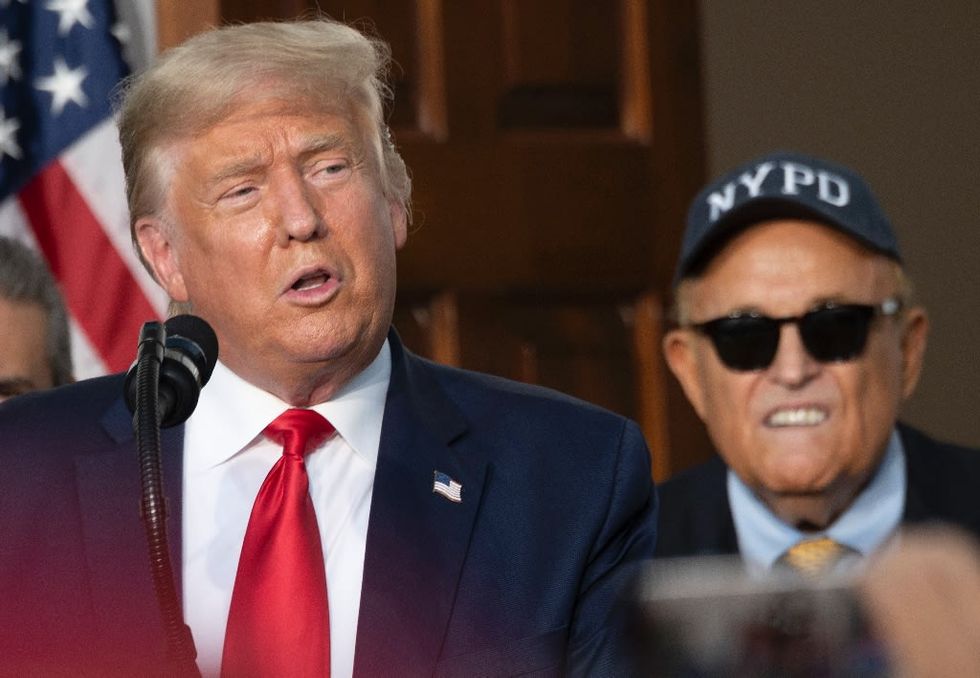 As the Republican Party debates whether to embrace or jettison Trumpism, former US president Donald Trump himself has said he is seriously considering a run to win back the White House in 2024

Washington (AFP) - Shut out of the White House and desperate to reclaim power in Congress next year, Republicans are locked in an internal battle over their party's direction, and whether to embrace or jettison the divisive politics of Donald Trump.

One hundred days after Trump's turbulent term gave way to Democratic rule in Washington, Republican lawmakers spent part of the last week in closed-door soul searching at their annual retreat in Florida, struggling to tamp down their conference's extremist personalities and highlight conservative policies they believe will resonate with voters.

The party of Abraham Lincoln and Ronald Reagan is scrambling to forge a path out of political limbo in the run up to the 2022 midterm elections and ultimately the next presidential race in 2024.

Even if there is GOP appetite for ditching the rhetoric of nativist grievance and moving on from Trump, many Republicans still see him as their party's de facto leader -- although an NBC News poll this week showed Trump's support among Republican voters is slipping.

Trump himself told Fox News last week he is "beyond seriously" considering another White House bid to challenge President Joe Biden, or another Democrat, in 2024.

Such statements are likely to freeze the primary field until Trump announces his political plans, denying the party opportunities to vet and debate the candidates who would otherwise step forward to challenge Democrats for the White House.

Republican strategists and lawmakers themselves acknowledge the party is grappling with how much distance they need to take from Trump and who can lead them back to power.

"Any party that loses a presidential election goes into the wilderness for a while," Matt Mackowiak, a Republican consultant in Texas, told AFP in a Friday interview.

"When you're in the wilderness you don't have one unified leader," he explained. "But the difference with us is we do have one leader, and it's Trump."

The ex-president however is weighed down with baggage. His approval ratings have slid, he faces mounting legal woes, and his former personal lawyer Rudy Giuliani is under federal investigation.

"There's an emerging consensus that Trumpism without Trump may give us the best opportunity to win in 2024."

Eager to appear as the party of inclusion, especially following the guilty verdict in the trial of the white ex-police officer charged with murdering George Floyd, Republicans appointed Senator Tim Scott, the chamber's only Black Republican, to deliver the rebuttal to Biden's Wednesday address to Congress.

In a 15-minute response, Scott made an open-armed plea for Americans of all political stripes to reach "common sense and common ground."

The choice of Scott was ideal, Mackowiak said, because his approach to policy and engagement has "the broadest appeal" within the party.

But even as Scott sought to assure that "America is not a racist country," members of his own GOP have used nativist rhetoric as the party struggles with its populist impulses.

Congresswoman Marjorie Taylor Greene, who once publicly embraced QAnon conspiracy theories and is a fierce Trump defender, was among a handful of conservatives reportedly backing a platform that advocated "Anglo-Saxon political traditions."

Congress's most powerful Republican, Senate Minority Leader Mitch McConnell, has made clear he opposes such rhetoric.

He refused to latch himself to Trump, an election loser who fueled conspiracy theories about voter fraud and was impeached for inciting a deadly riot at the US Capitol in January.

But in April the former president eviscerated McConnell before well-heeled donors at Trump's Mar-a-Lago club, where he reportedly called the veteran senator "dumb".

As Republicans craft their 2022 midterms strategy, an ugly rift emerged at the retreat between top House Republican Kevin McCarthy and conference chairwoman Liz Cheney -- a breakdown the GOP was hoping to avoid as it urges internal unity.

Cheney, among 10 Republicans who voted for Trump's impeachment in January, said politicians who challenged the election results should be disqualified from running for president.

McCarthy shot back saying discussing such issues at a retreat focused on policy was "not being productive."

Cheney, who caught flak within her own party for fist-bumping Biden before his speech to Congress, has not ruled out running for president.

But her political future would likely be hamstrung until and unless the Republican Party breaks with Trump, who has repeatedly attacked Cheney in recent statements.