Republicans won’t stop lying about the history of the filibuster: columnist 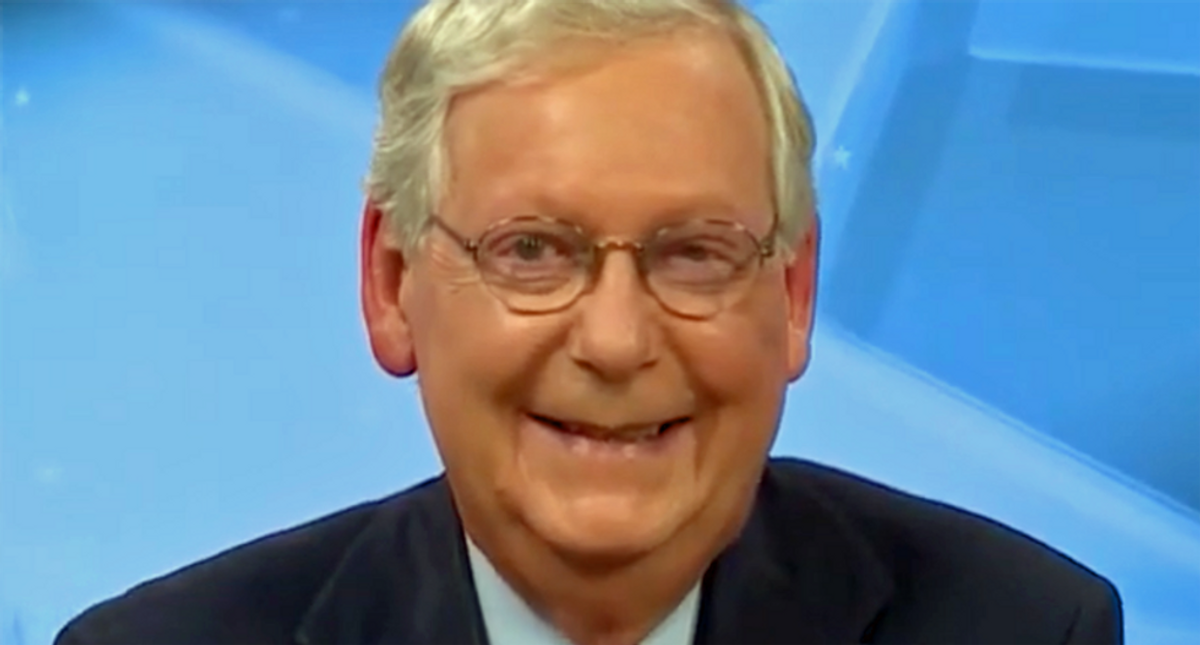 Standing next to Arizona's Sen. Kyrsten Sinema, top Republican Sen. John Cornyn (TX) loomed approvingly as she lied about the "history" of the filibuster, incorrectly claiming that it was designed to preserve "democracy" and give a "veto" to the minority party.

Writing for New York Magazine, Jonathan Chait explained that Sinema appears to have been co-opted by those attempting to manipulate her for their own political gain.

"To those who say that we must make a choice between the filibuster and 'X,' I say, this is a false choice," Sinema claimed this week. "The reality is that when you have a system that is not working effectively . . . the way to fix that is to fix your behavior, not to eliminate the rules or change the rules, but to change the behavior."

There's a fanciful mystique about the filibuster created by the Frank Capra film "Mr. Smith Goes to Washington." But the reality is that the filibuster in that film isn't the filibuster today. Republicans in the minority have the power to obstruct every law with a simple threat of a filibuster, which flies in the face of the Constitution.

The idea that "the filibuster was created to promote bipartisanship" is as fantastical as "the electoral college was made to protect rural voters," explained New York Times opinion columnist Jamelle Bouie.

"The imaginary history has been repeated so often that people 'know' it to be true and can rattle off its fictional elements when pressed to supply a reason why they support an institution that no overseas democracy, and none of the 50 state governments, have copied," wrote Chait.

He cited Sinema proclaiming with confidence that she was upholding some kind of historic policy that dates back to America's founding. Whatever she was told from Cornyn is a lie, and she was made the fool by "repeating a version of this fake history."

"The Founders not only did not create the filibuster, they specifically rejected a supermajority voting requirement," wrote Chait. "(They didn't like having a chamber where every state had equal votes regardless of size, either, but they had to agree to it, for the same reason they had to accept the three-fifths clause: They were politicians, and they couldn't wrangle enough votes for the Constitution without compromising their principles to do it.) They created a supermajority requirement for a handful of special votes, like a treaty or Constitutional amendment, but rejected such a requirement for normal legislation."

He went on to cite Alexander Hamilton's words in "The Federalist Papers":

To give a minority a negative upon the majority is in its tendency to subject the sense of the greater number to that of the lesser number …The necessity of unanimity in public bodies, or of something approaching towards it, has been formed upon a supposition that it would contribute to security. But it's real operation is to embarrass the administration, to destroy the energy of government, and to substitute the pleasure, caprice, or artifices of an insignificant, turbulent or corrupt junto, to the regular deliberations and decisions of a respectable majority.

It's the kind of thing that Republicans are hoping Sinema and the rest of America don't google.

As it stands now, the filibuster doesn't replicate a powerful moment from a passionate senator holding the floor out of principle. It's not even a filibuster at all. Instead, all Republicans must stop the government from functioning is to threaten a filibuster.

Earlier this year, it was reported by New York Magazine that Senate Minority Leader Mitch McConnell (R-KY) was fearful that the Democrats will actually kill the procedure.

Former Senate insider Adam Jentleson explained in his book Kill Switch: The Rise Of The Modern Senate And The Crippling Of American Democracy that the Senate rules requiring debate and discussion are what they should be. It might be annoying for politicians who want a government to work like a remote control, but the branch was never supposed to be like that. Every politician should be forced to stand before the American voter and justify their votes because that's the way the Constitution intended it.

That's a problem for Republicans, though. Holding the floor for hours to explain to the American people why there shouldn't be a Jan. 6 Commission or defending policies that let corporations out of paying taxes. The last thing Republicans want is for their voters to witness their excuses for opposing popular laws. So, instead of admitting the truth to their states or even their colleagues, they can hide, anonymously, behind the threat of a filibuster while lying to the Sinema and the rest of the country about the procedure's history and purpose.

Both Sinema and Sen. Joe Manchin (D-WV) said that they will not get rid of the filibuster, but there hasn't been an actual filibuster in years. Neither Sinema nor Manchin has been asked if they'd support bringing back the actual filibuster, demanding that lawmakers hold the floor to explain to the country why they support or oppose a law.