Laina G. Stebbins, Michigan Advance
A misspelled Trump sign at the right-wing rally calling for a so-called "audit" of the 2020 election at the Michigan Capitol, Oct. 12, 2021 | Laina G. Stebbins
At the urging of former President Donald Trump, a crowd of about 400 supporters flocked to the Michigan Capitol steps Tuesday to spend the cloudy afternoon demanding a “transparent forensic audit" of the 2020 presidential election that the one-term GOP president lost.

GOP activists in Michigan and other states have called for an Arizona-style audit. Experts said the chaotic and often opaque process did not meet professional standards. But it (again) found no evidence of fraud and that now-President Joe Biden won the state, even though Trump and other supporters have lied that it did.

Biden defeated Trump by more than 154,000 votes in Michigan.

According to Secretary of State Jocelyn Benson's office, more than 250 state and local audits have confirmed the accuracy and integrity of Michigan's election, and none have come up with any evidence of widespread voter fraud.

The Lansing event featured familiar figures from conspiracy-laden events committee hearings thanking “patriots" for their Trump votes and repeatedly calling for the state's long-confirmed election results to be reexamined. 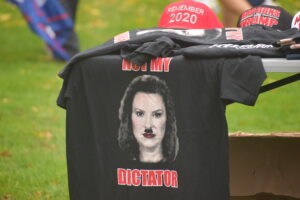 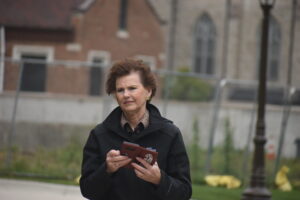 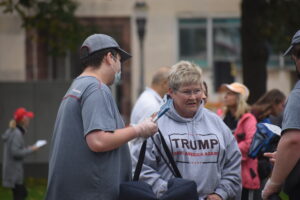 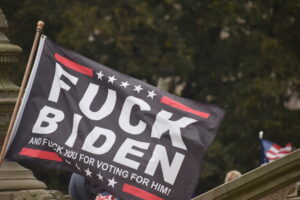 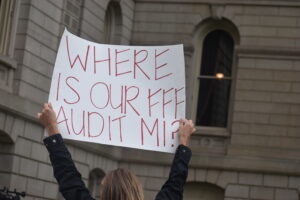 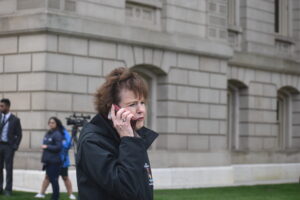 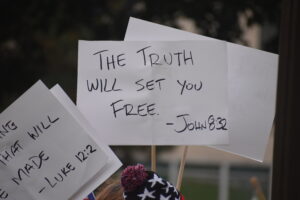 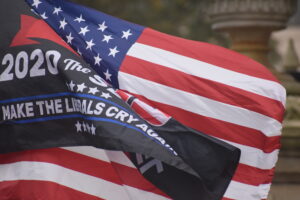 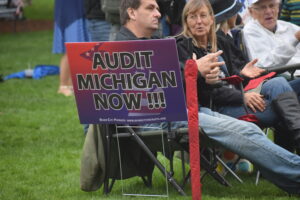 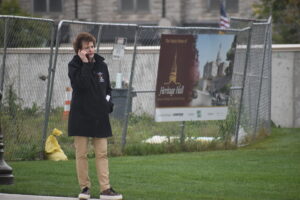 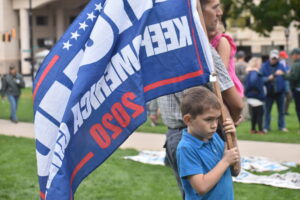 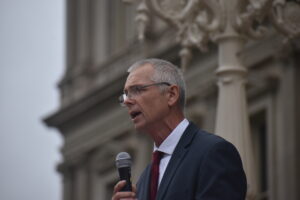 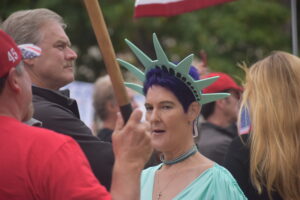 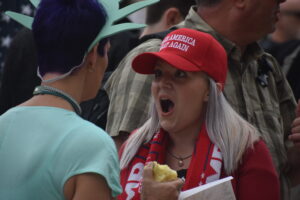 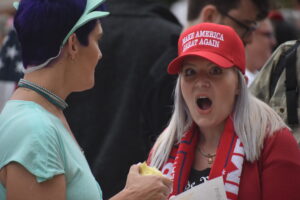 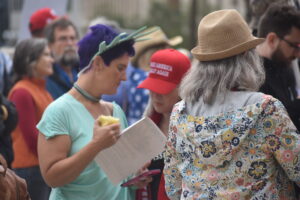 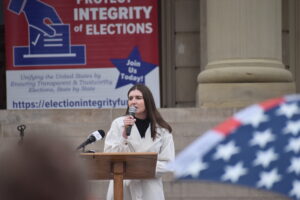 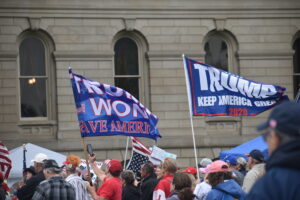 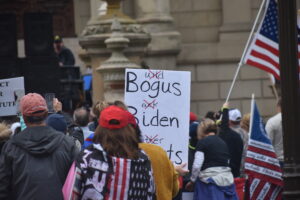 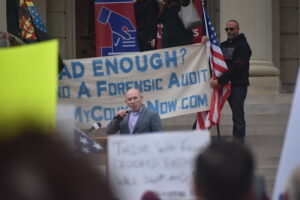 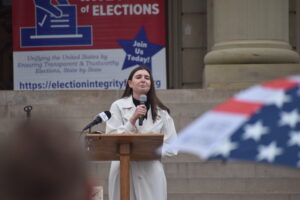 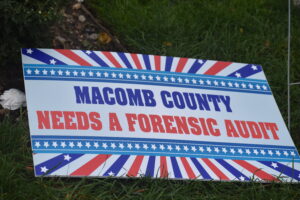 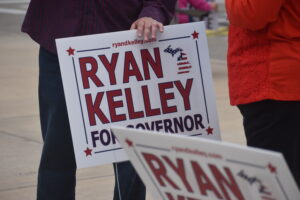 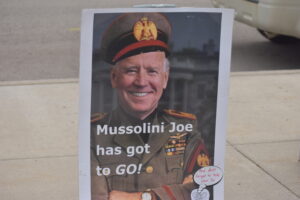 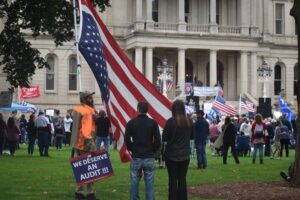 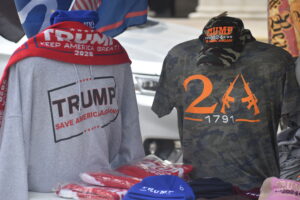 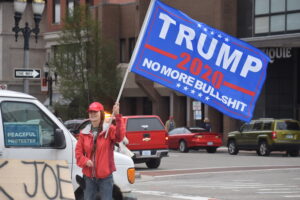 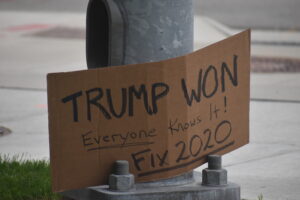 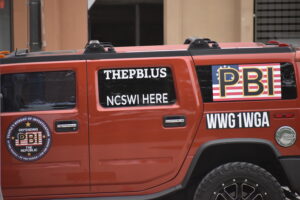 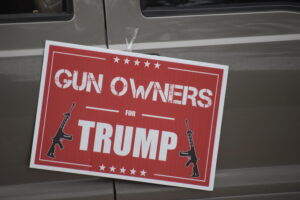 The rally was emceed by Janice Daniels, a former Troy mayor who was elected during the tea party wave, but was successfully recalled after making a series of homophobic comments.

Speakers and attendees repeated false claims about 5G “chips" in voting software, conspiracies about the voting software company Dominion being in on an effort to fix the vote, so-called “phantom voters" and more “evidence" that speakers say points to Democrats stealing the election from Trump.

Speakers told the more than 300 attendees to not give up on their efforts to support Trump and demand a full election audit.

At one point, speakers announced that Benson was “in the audience" and offered that she take the mic and explain the so-called voter fraud. Some audience members held up signs scrawled with messages like “Benson for prison," while event organizers repeatedly and baselessly insinuated that the Democratic official willfully broke election laws.

Benson was not present and a spokesperson did not immediately return a request for comment. It appears that attendees mistook her for House Minority Leader Donna Lasinski (D-Scio Twp.), who was screamed at and booed by Trump supporters on her way into her Capitol office.

“… The behavior we saw today is not just embarrassing for our state, it's downright dangerous. Efforts like this to undermine faith in our democracy are no longer just about overturning the 2020 election, they're about eroding trust and laying the groundwork to overturn the next election," Lasinski continued.

According to the Detroit News, Rendon was seen wearing a pin with a “Q" flag symbolizing the pervasive right-wing QAnon conspiracy theory that is rooted in anti-Semitic tropes and revolves around Trump hunting down and eventually killing Democratic politicians and wealthy liberals who lead double lives as Satan-worshipping cannibals running a child sex trafficking ring.

“Now we've seen the evidence [of election fraud]. … We've seen a lot of evidence. Why doesn't anyone else want to see it?" Rendon said on stage Tuesday, without offering details of the evidence.

Rendon was one of several Michigan lawmakers who sought to disrupt the state's Electoral College vote in December by submitting an illegal slate of GOP “electors." She has also been involved in legal efforts to overturn the election and challenge election results.

Michigan Democratic Party (MDP) Chair Lavora Barnes released a statement Tuesday excoriating the rally and attaching a picture of Rendon wearing the QAnon flag pin during what appears to be a legislative committee hearing.

The House and Senate did not hold regular sessions with attendance and votes on Tuesday. Spokespersons for both Senate Majority Leader Mike Shirkey (R-Clarklake) and House Speaker Jason Wentworth (R-Clare) said the decision was not related to the coinciding Trump rally outside.

“Not in the least," Shirkey spokesperson Abby Mitch told the Advance in an email Monday. “Both caucuses' floor leaders made it clear they had members who wanted to attend the funeral of Rep [Andrea] Schroeder [R-Independence Twp.]," Mitch said.

Colbeck, as he has done before at legislative committee hearings since the 2020 election, repeated unsubstantiated claims to the crowd about Democrats purposefully exploiting weaknesses in the election system to change the votes.

“That allows one person with an IV drip of Red Bull to go off and modify and select the next leader of the free world," Colbeck said. He went on to characterize Benson's efforts to send out absentee ballot applications — not ballots themselves — as “good old-fashioned ballot stuffing."

“I have been threatened by Dana Nessel," DePerno said, without evidence, amid chants of “lock her up," before launching into talking points that ranged from blasting “socialism" to ending critical race theory, which is not part of the curriculum in Michigan schools.