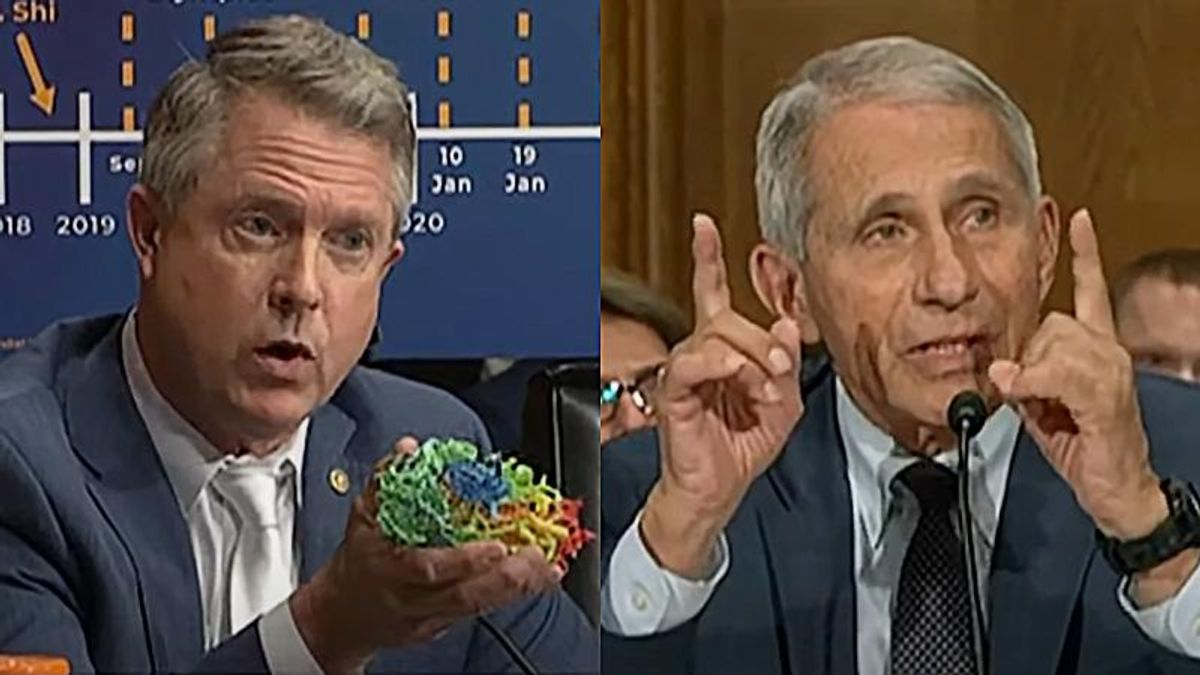 Roger Marshall and Anthony Fauci during a Senate hearing on COVID-19. (Screenshot)

Like Paul, Marshall attempted to argue that Fauci and his colleagues were involved in "gain of function" research that led to the creation of the COVID-19 in a Chinese lab.

Once again, though, Fauci wasn't having any of it.

Marshall began by holding up a 3-D printing of the COVID-19 spike protein, which he admitted "baffles me in so many ways."

Marshall then asked Fauci whether he agreed with a statement by Dr. David Baltimore, who called a specific characteristic of COVID-19 "the smoking gun for the origin of the virus" that makes "a powerful challenge to the idea of a natural origin."

"Dr. Baltimore, who's an extremely accomplished scientist, has backtracked on that statement, and said 'I wish I had not used the phrase smoking gun,' when it was pointed out to him that actually this is seen in a number of coronaviruses, including one of the common cold coronaviruses," Fauci responded.

"So you disagree with him?" Marshall asked.

"Well, I agree with his second statement, where he backtracked," Fauci said.

"So you disagree with his first statement," Marshall asked again.

"And he disagrees with his first statement," Fauci responded.

"OK, he's not going to answer the question," Marshall said, before moving on to a discussion about the "S-1 sub-unit of the spike protein."

"I think you'll agree that the NIH funded research that led to an S-1 spike that looks very similar if not exactly like what's on the COVID 19 spike," Marshall said, reading directly from prepared notes.

"What are you referring to? Can you please be more specific?" Fauci said. "Are you talking about an experiment? Are you taking about a paper that was published?"

"I'm talking about viral research that was done using NIH funding that developed this S-1 subunit spike that looks exactly like what we have on the COVID-19 spike," Marshall said, calling it "basically the development of the key to the door, that took the original SARS and made it so it would bond to human lung cells."

"Would you agree that the spike that was developed there is also what's on COVID-19?" Marshall asked.

"That's irrelevant to anything until you have a context into which you're putting it," Fauci reiterated.

"Would you agree or disagree that it's the same spike?" Marshall said.