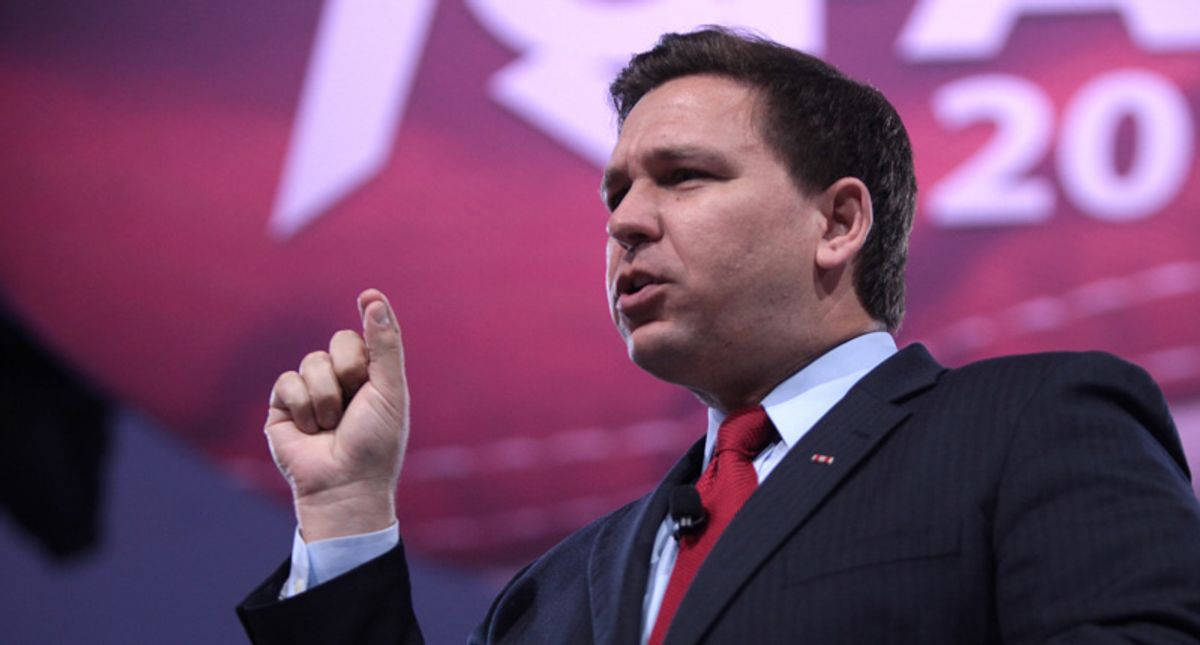 According to a report from Politico's Playbook, former staffers who worked for Gov. Ron DeSantis (R-FL) are getting together to commiserate over working conditions they endured under the controversial governor when he was still a member of the House -- as well as the demands of his wife.

DeSantis, who has his eye on the 2024 GOP presidential nomination should Donald Trump not run again, has been attempting to increase his national profile in what is expected to be a large field of GOP contenders that could include both of Florida's U.S. Senators Marco Rubio or Rick Scott. With that higher profile comes more pressure and the governor is being accused of bullying staffers as well as placing blame on them when things didn't go his way on his climb to the top in the state.

According to Politico, the Republican governor "...left behind a trail of former disgruntled staffers and has no long-standing political machine to mount a national campaign."

Noting, "We talked to a dozen or so onetime aides and consultants to the Florida governor, and they all said the same thing: DeSantis treats staff like expendable widgets. He largely relies on a brain trust of two: himself and his wife, Casey DeSantis, a former local TV journalist," the report states.

Summing up the relationship between the governor, his wife and his staff, one former employee bluntly stated, "Loyalty and trust, that is not a currency he deals in. It's him and Casey. But everyone else is like a disposable piece of garbage."

Case in point, Politico reports: DeSantis often blames his staff for his own blunders, we're told. After DeSantis went on Fox News in 2018 and implored Florida voters not to 'monkey this up' by supporting his African American Democratic opponent for governor, he and his wife chewed out his campaign staff for not cleaning up the mess, according to three former staffers. Shortly after, DeSantis brought in a whole new group of advisers."

Staffers were also appalled at how he treated an official recovering from cancer surgery.

"At the beginning of his administration, DeSantis directed the Florida Republican Party leader to fire a party official who had cancer — on that person's first week back from surgery," five different ex-staffers told Playbook which gets to the point that the governor doesn't see his aides as people worthy of consideration.

According to Politico, "Aides would lure DeSantis to staff meetings with cupcakes, saying that it was a colleague's birthday to get him to attend. In the gubernatorial primary, DeSantis visited his campaign headquarters just a couple of times. On election night, he entered the war room after his win and remarked, 'Wow, I didn't know this many people worked for me,' according to four former staffers."