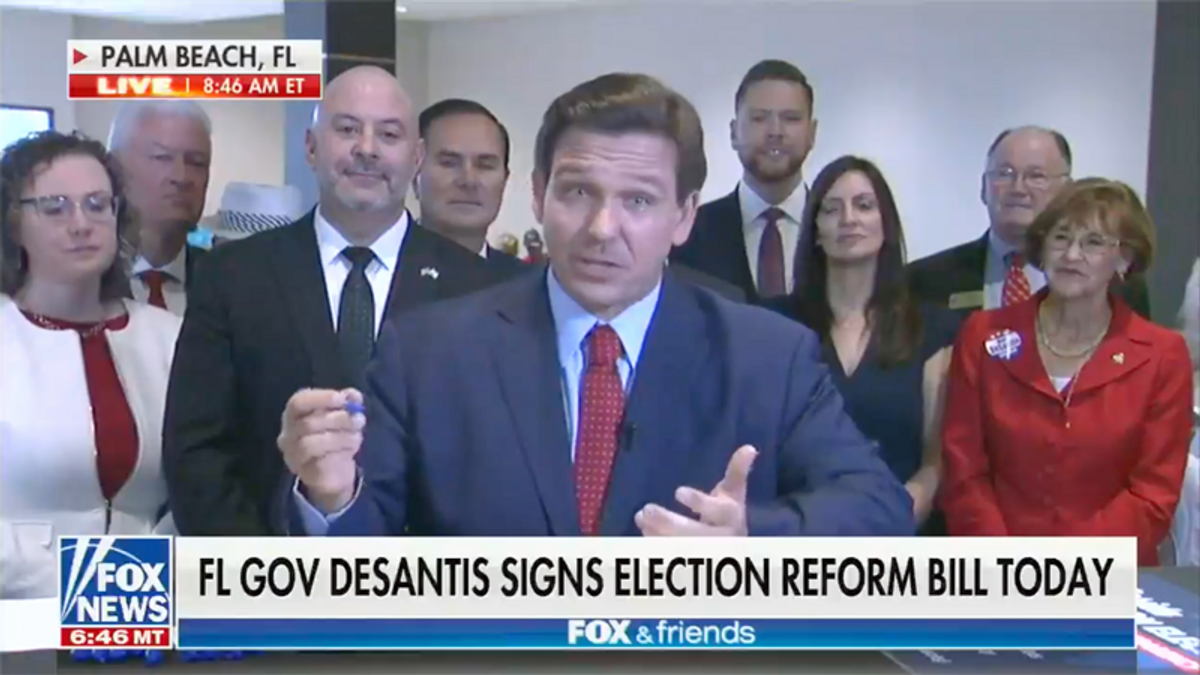 Florida Republicans were blasted for a new voter suppression law based on the "Big Lie" pushed by former President Donald Trump.

The South Florida Sun Sentinel noted DeSantis blocked journalists from the signing of the bill, which was broadcast exclusively by Fox News.

"Only Fox News, the Republican version of state-run media, was allowed in as Florida became the latest state to join the growing trend of imposing new barriers to voting," the newspaper wrote.

"America gets another revealing glimpse of life in Florida under the iron-fisted rule of DeSantis, a place where the doors are shut tight to anyone who might question his wisdom or challenge his authority," the newspaper explained. "Reporters and TV crews didn't miss much at the closed bill signing, but that's not the point. Locking out the media is the latest sign of DeSantis' authoritarian grip on governing the nation's third-largest state. He increasingly acts like his role model, the tyrannical Donald Trump, who picked petty fights with news outlets and cherry-picked reporters who tossed softball questions."

The newspaper wrote that Fox "has become a national joke masquerading as a real news organization."

"The oppressive law perpetuates the Big Lie of a stolen election by insinuating that Florida election laws needed fixing or don't prevent fraud. That's false. As DeSantis himself has said repeatedly, Florida ran a seamless election last November, with an impressive 77% turnout during a pandemic," the newspaper wrote. "Shame on Republicans for this law, which will only make it harder for lawful votes to be counted and will undermine public faith in Florida elections."

The editorial board called for courts to block the law.

"This law is indefensible, makes it harder for people to vote and should be struck down," the Sun Sentinel wrote.