Ron Johnson nickname ‘RonAnon’ could harm him in 2022 re-election: ‘That ain’t good’

Republican Sen. Ron Johnson's far-right lurch could harm him as he seeks re-election in Wisconsin in 2022.

If Johnson runs, it would be a violation of his pledge to only seek two terms, but that might not be his biggest problem.

"Johnson keeps getting tagged for all the outrageous stuff he's saying," Punchbowl noted. "The nickname 'RonAnon' was floated (think 'QAnon.') That ain't good for a senator in cycle in a swing state." 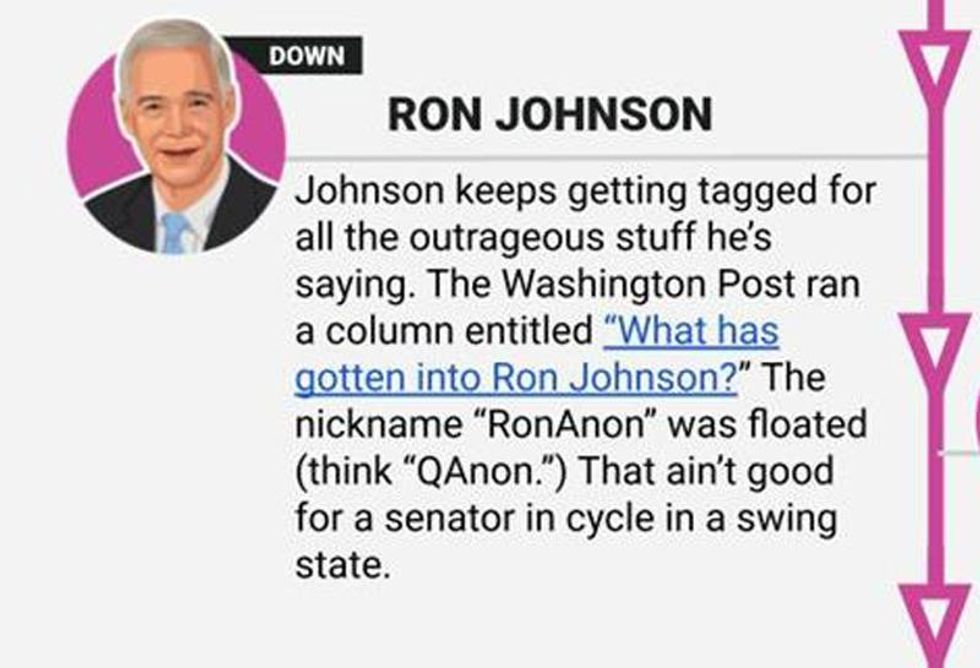 The Washington Post column mentioned was written by Karen Tumulty.

"What has gotten into Ron Johnson? That is a question that mystifies some of those who counted themselves as enthusiastic supporters of Wisconsin's Republican senator back when he entered politics a little more than a decade ago," Tumulty wrote. "Once referred to affectionately back home as 'RonJon,' he is lately becoming known as 'RonAnon' for his conspiratorially minded gambits."

"His evolution is emblematic of what has happened to the entire Republican Party in the era of Donald Trump," she explained. "Johnson says he has not yet decided whether to run for a third term in 2022, but if he does, he will be the only Senate Republican defending a seat in a state won by President Biden, which pretty much guarantees he will be the Democrats' top target."

"How all of this works out will be worth watching, and not just for how it affects an important Senate seat. Johnson is giving us an ideal test case that will show how well Trumpism plays in the post-Trump era," Tumulty noted.