Ron Johnson supporters mystified by his transformation into conspiracy-spouting 'RonAnon' 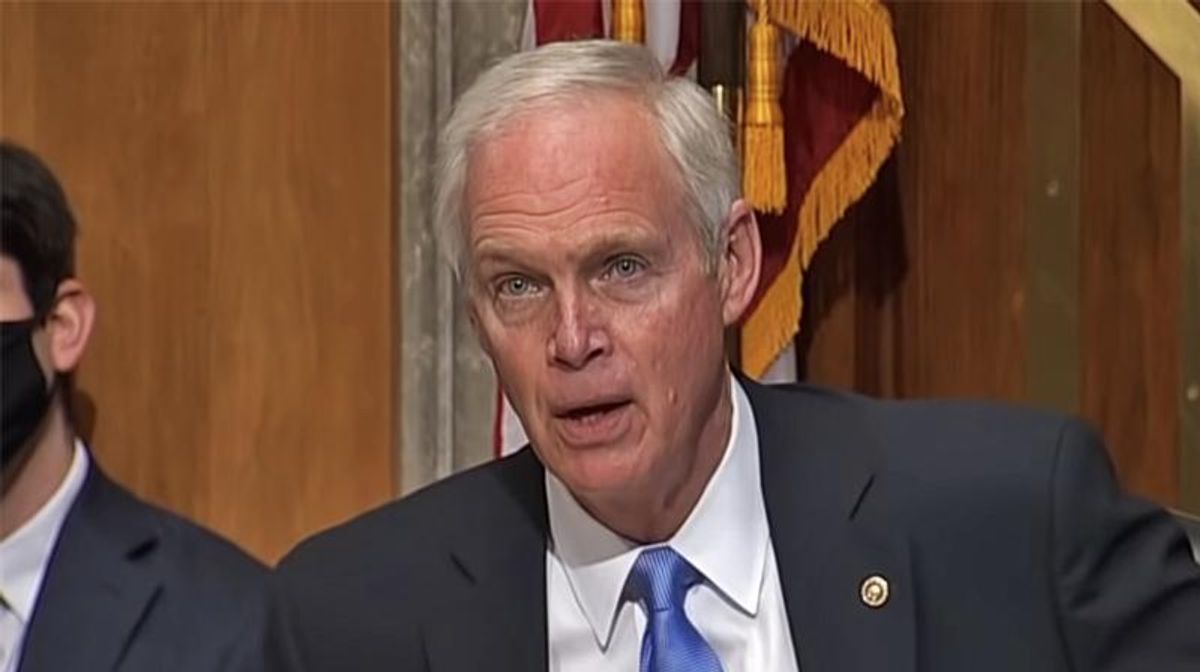 Writing for the Washington Post, columnist Karen Tumulty reports that hometown fans of Sen. Ron Johnson (R-WI) are scratching their heads over his transformation from successful straight-laced businessman into one of the U.S. Senate's leading conspiracy mongers.

Among other unfounded claims the Wisconsin Republican had made recently was at a recent Senate committee appearance where he said the Capitol riot on Jan 6th. was the work of anti-Donald Trump "provocateurs," while he read a post from a right-wing website that claimed the insurrectionists were "festive" while stating the rioters are "presumed to be Antifa or other leftist agitators."

Those comments led Rep. Adam Kinzinger (R-IL) to fire back, "It's disgraceful for a sitting Senator to spread disinformation so blatantly," before adding, "it's dangerous and it must stop."

Concerns like that are being echoed in Wisconsin as voters wonder if Johnson will run for re-election in 2022.

According to Tumulty, "... the former plastics executive from Oshkosh styled himself as a sensible businessman, driven by data and hewing to traditional GOP issues such as smaller government. In 2013, he was excoriated by the right-wing media when he described one of its heroes, Sen. Ted Cruz (R-Tex.), as 'intellectually dishonest.'"

As she notes, that was then and this is now with Johnson undergoing a major transformation during the waning days of Donald Trump's administration.

"As chairman of the Senate Homeland Security Committee before Democrats took control of the chamber in January, Johnson spent an inordinate amount of time examining baseless claims that there was serious fraud in the 2020 election. He conducted a probe of the Biden family that came up with nothing. He also held hearings at which so-called experts touted discredited claims, embraced by Trump, that hydroxychloroquine was an effective covid-19 treatment," she wrote, adding, "Once referred to affectionately back home as 'RonJon,' he is lately becoming known as 'RonAnon' for his conspiratorially minded gambits."

One conservative commentator -- who was an early backer of the Wisconsin Republican -- expressed astonishment at the road Johnson has taken.

"To be honest, I just don't know. He was very mainstream, a free-market-driven business guy who would have reflected the Wall Street Journal editorial pages," conservative Bulwark founder Charlie Sykes admitted.

The columnist suggested that Johnson -- should he decide to seek a third term -- is looking for support from pro-Trump voters in his state in what could be a tough re-election battle.

"But his antics are just as likely to bring more Democrats to the polls, which many Wisconsin Republicans fear could create problems for the rest of the state's GOP ticket, and potentially doom their hopes of winning back the governorship," she predicted which falls in line with one Wisconsin GOP official who predicted the incumbent is "in a world of hurt" should he decide to run again.