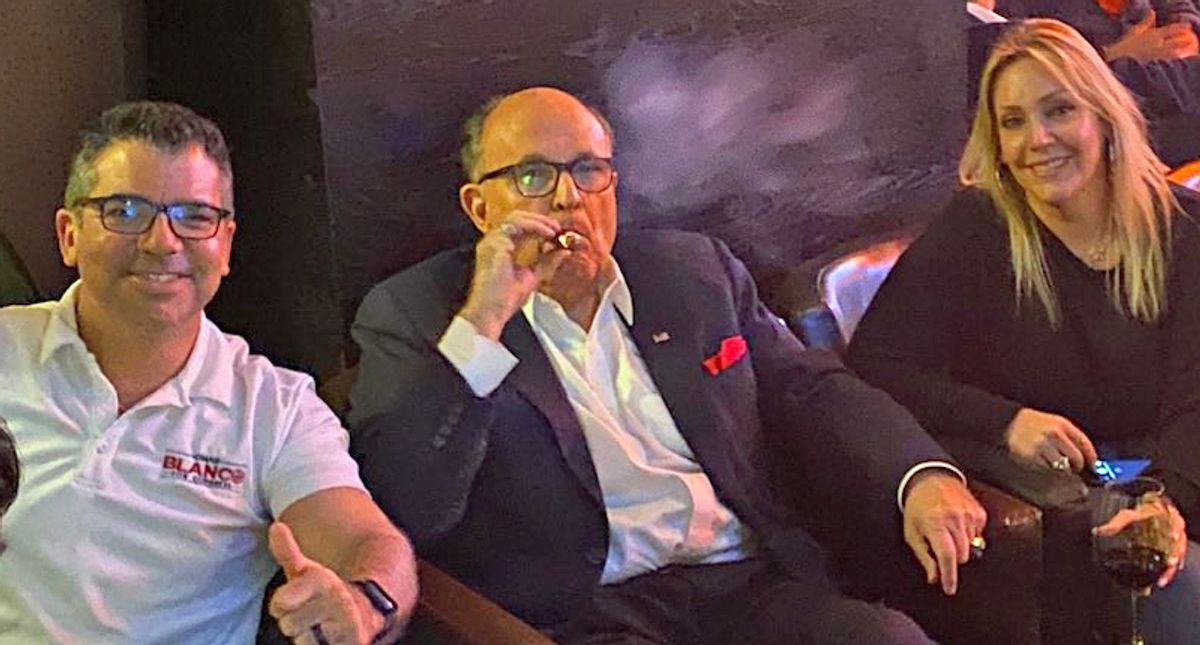 Last week former attorney to President Donald Trump, Rudy Giuliani, was raided by the FBI as part of an investigation into work he allegedly did on behalf of foreign countries. Speaking to MSNBC on Monday, former FBI official Frank Figliuzzi and former senior prosecutor to Robert Mueller, Andrew Weissmann, explained why nothing about the story is good news for Giuliani.

MSNBC host Nicolle Wallace began by saying that major news outlets are withdrawing their reports that Giuliani was briefed by the FBI about his actions being possibly illegal. In fact, a briefing was prepared with the anticipation of giving it to Giuliani, but it was never actually conducted as a debate spread through the Justice Department about whether it would compromise the investigation. It all happened in the final months of the Trump administration, the AP reported last week, before Attorney General Merrick Garland took over.

"Ultimately, you do a cost-benefit analysis and decide whether it's sensible to do [the briefing]," explained Figliuzzi. "Does it help or hurt the investigation? Here's how that conversation may have gone with regard to Rudy Giuliani and the briefing that wasn't given. First question, is this: what's the purpose of the briefing? Somebody would have said, 'we do them to raise awareness,' 'we do these briefings to warn people that they're in over their heads with the Russians.' And then somebody might have said, 'Rudy Giuliani was an Associate Attorney General of the United States. He was the U.S. Attorney for the Southern District of New York. He knows how foreign intelligence services operate, so this doesn't really give him a heads up or a warning about anything he doesn't already know."

Figliuzzi went on to say that another question would be that Giuliani could ask if he's under investigation or claim he doesn't need a briefing because he's an expert.

"Then last question, what do we get out of this?" he asked. "Do we have evidence on Giuliani right now? Do we need him to say something and monitor him after the briefing to see if he changes his conduct? The answer, probably not. We probably have enough. This is probably more harmful to give the briefing than not. He is going to come out publicly if we give it and say that they never told me to stop doing what I was doing and, therefore, I thought it was okay. Let's not give the briefing. That's how that goes."

Weissmann explained Giuliani's excuse that he was acting as a lawyer on behalf of a client.

"So, he has a really good defense if he was solely acting for a U.S. person and if the only client was the president of the United States, now, the former president," said Weissmann. "Then that cannot be a violation because that requires that he act for a foreign person either a foreign government or any foreign individual."

As Weissmann explained, Giuliani can do both, serve clients from multiple sides, so the Southern District of New York will have to essentially follow the money to find who Giuliani was truly acting on behalf.

"If he has foreign clients, they clearly were asking him to do something and so all you have to do is trace that out as to what he was doing for them," said Weissmann.

Figliuzzi closed by explaining that when the FBI conducts a raid, it means that the evidence is available to go public with the investigation and they're merely looking for evidence to corroborate the information they already have.

"I think it's wrapping and nearing an end, but let me respond to what Claire [McCaskill] said," he continued. "This sets up a fascinating tension between Trump and Giuliani because, as Claire said, Giuliani was probably getting money from the Ukrainians or elsewhere. And now he's going to claim — Giuliani — 'I was just working for Trump. He is my client. Not for a foreign power or people.' And Trump will have to say, 'Yes. He was just working for me. I knew everything he was doing.' Trump's not going to say that. Rudy will be hung out to dry."