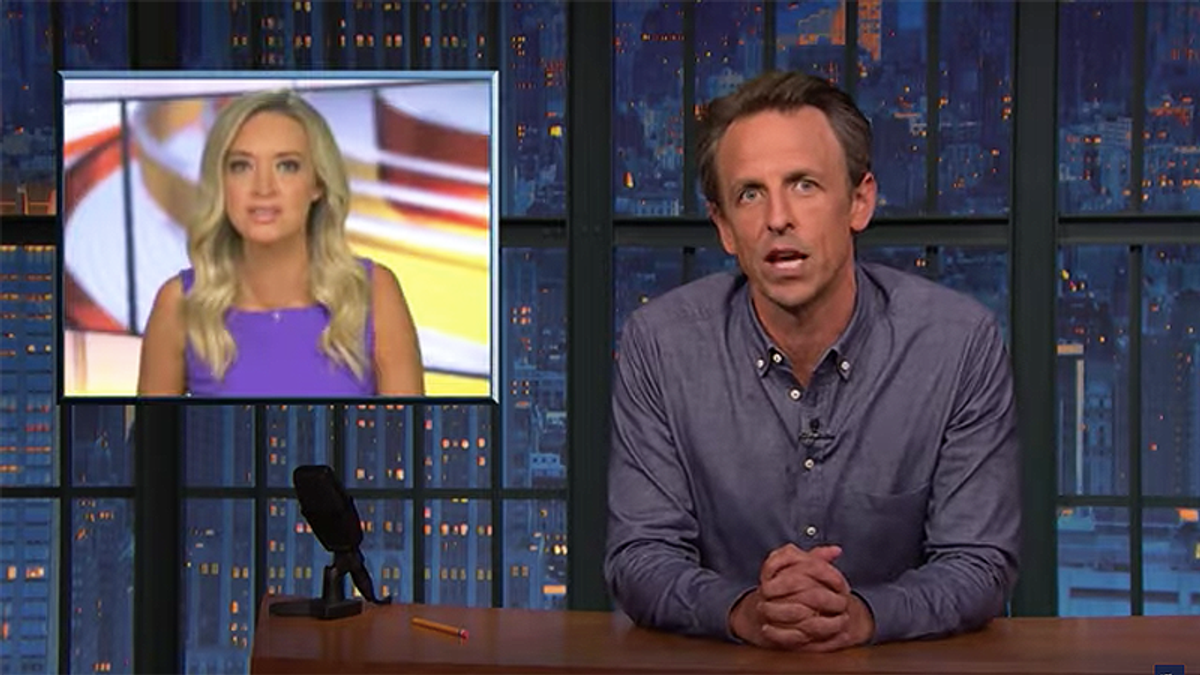 "I mean, we just went through four years of bullsh*t liars trying to convince us that reality isn't reality," said Meyers. "They were like hypnotists, except instead of a pocket-watch, they used a meatball on a string."

"Yeah, no, it is," said Meyers in response to the fake Trump.

"Yes, it does and, also, you're like, getting sauce everywhere," said Myers. "Also how does meatball hypnosis on like 50 percent of the country? In fact, if sh*t hypnotists still want to be on TV lying for a living like former White House press secretary Kayleigh McEnany, who was shameless enough to go on Fox yesterday and criticize President [Joe] Biden for supposedly inflaming tensions by gently suggesting that it would be good if the jury agreed that murder should, in fact, be illegal."

McEnany misquoted Judge Peter Cahill, who said that he wishes political officials wouldn't intervene in the judicial process, which he said he felt Rep. Maxine Waters (D-CA) did. Neither Biden nor Waters addressed the trial until after the jury had been sequestered from news and television. Cahill said as much in his statement to the defense attorney.

"Right, of course, we wouldn't want a president inflaming tensions," said Meyers. "Who did you work for again? Oh, right. President flame thrower. But, sure, Biden's the one inflaming tensions. I mean, what's he going to do next? Gather a group of violent insurrectionists dressed like werewolves and Call of Duty cos-players down at the Capitol and tell them to fight? While his no-neck pasta-goblin of a lawyer calls for a trial by combat? Maybe he'll become best friends with a pillow salesman to claims the jury vote was rigged by Hugo Chavez and the CIA is part of a vast communist conspiracy. 'I saw Che Guevara and Hugo Chavez down at the courthouse using CIA computers to rig the verdict just like how they rigged the Superbowl against DA BEARS!'"

Meyers confessed that he knows that Mike Lindell isn't from Chicago but, "I don't, what's the word, care."

He went on to bash Republicans for their decision to not only support murder by Derek Chauvin, but now they're legalizing it in several states.

See his attack on the GOP below: