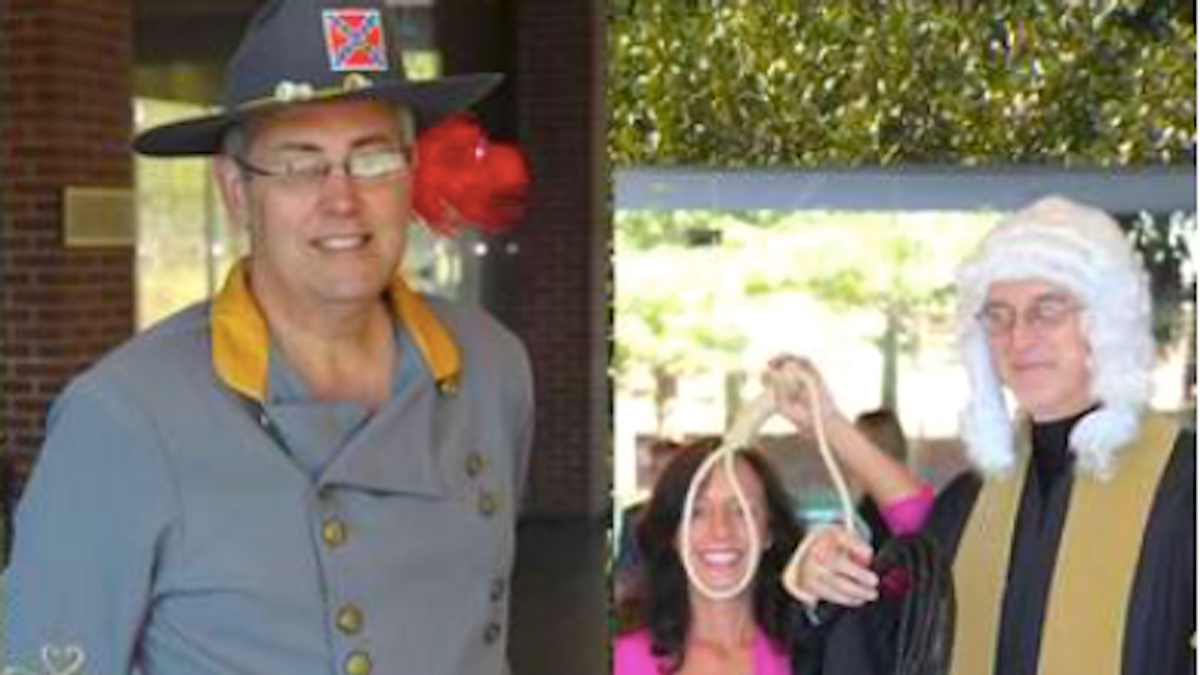 Three professors at the University of South Alabama were suspended after they were seen wearing and holding racist symbols in photos taken at a campus event.

A university spokesman verified two photos taken in 2014 that shows a college dean wearing a Confederate soldier's uniform, while two professors posed with a whip and noose, and a statement confirmed the images came from a campus costume party held at the Mitchell College of Business, reported WKRG-TV.

All three professors -- Bob Wood, Alex Sharland and Teresa Weldy -- were placed on administrative leave, but students have gathered more than 3,000 signatures on a petition calling for their firing.

"The fact that these professors are still currently employed by the University shows a deep failure to commit to a safe, welcoming environment for students of all backgrounds," the petition says. "Racism cannot simply be given a slap on the wrist. It must be addressed as the serious issue it is. We cannot have professors who partake in this kind of behavior."

University president Tony Waldrop admits the university failed in its initial response after school administrators learned of the photos last year, although the since-deleted images were posted on the business college's Facebook page shortly after the Halloween party.

"We acknowledge that, in our response to this incident, we failed in our obligations and responsibilities to our students, our employees and our community," Waldrop said in a statement. "For this, we are deeply sorry to everyone who is rightfully hurt and offended by these images."

Two of the professors issued their own statements through the university expressing regret for their choice of costumes.

"Seven years ago, I rented and wore a last-minute costume that was ill-conceived to a faculty and student Halloween costume contest, at which I served on a panel of judges to select the winners," said Wood, who was recently demoted from Mitchell College of Business dean to professor. "I sincerely apologize and am sorry for doing so and ask for forgiveness for this error in judgment."

Sharland claimed the costumes were intended to be humorous.

"In retrospect, I can see why someone might find the image hurtful, and I regret this attempt at humor that clearly failed," Sharland said. "It was not my intent to hurt or be offensive, and if anyone is offended by this picture I apologize."