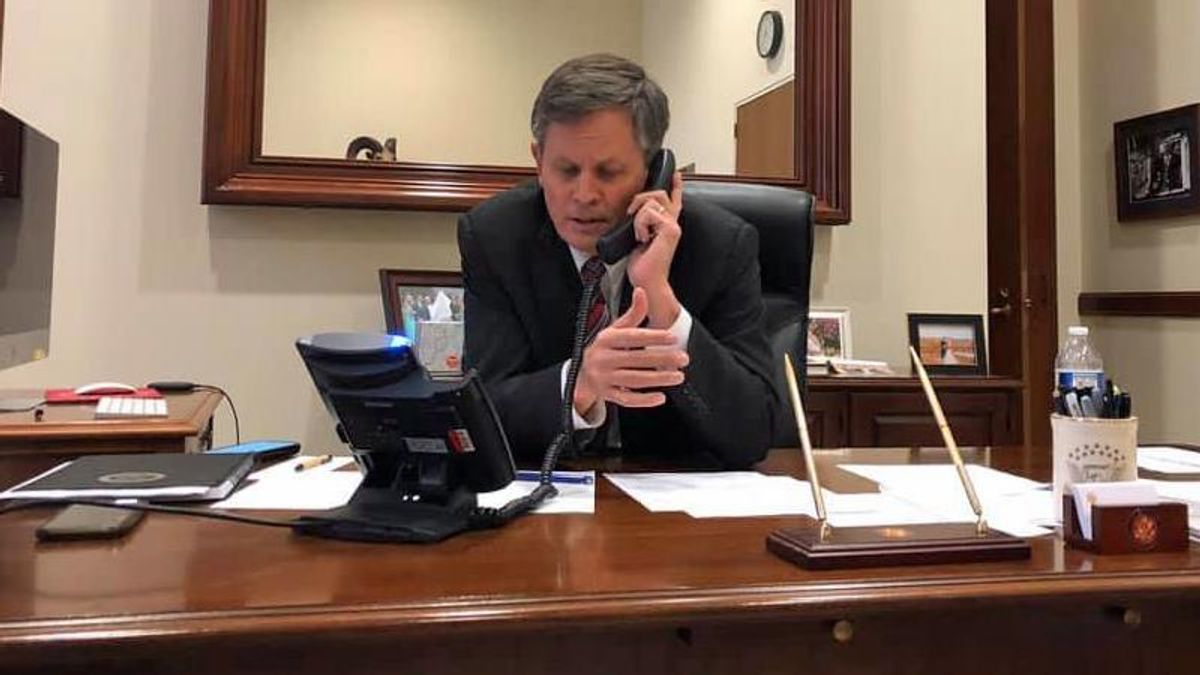 "This isn't about representation, it's a power grab to advance their radical agenda and destroy our Montana way of life," Daines claimed.

Daines, who has been repeatedly called out for racism and bigotry, received harsh pushback for his argument in favor of continued voter disenfranchisement. Here's some of what people were saying:

Say a member of a party that is deliberately going out and changing election laws in 20+ states so they can win elections to stay in power. 🙄
— christina m. brooks (@runewarrior) April 22, 2021

This is about representation, but it's very telling that Republicans don't think congressional representation for 700,000 Americans is important if it doesn't benefit Republicans.
— Derp Merchant (@CigarInTheWall) April 22, 2021

Is the Montana way of life different from the American way of life? You know, the one where all citizens elect Senators to represent them?
— ∞ Monkeys say, nuke the filibuster (@hey_late) April 22, 2021

I see "purely partisan," "power grab," "radical agenda" and "destroy" and it's clear you are actually referencing this: pic.twitter.com/toasiOGM5b
— taradavi (@d_taradavi) April 22, 2021

I feel like you're confused about the makeup of DC. Or, like... anywhere? Mostly, they'll vote for the candidates they like the most. What you're admitting here is "the republican agenda is inherently tied to racism so we'll never win a majority black state". So, don't do that.
— Geoff Smith (@HappyFunNorm) April 22, 2021

That's so adorable. Maybe they should just take away Montana's representation. You don't seem too concerned about American citizens having voting representation in Congree.
— NickyTheSquid (@kenckar) April 22, 2021

Maybe the GOP should make themselves more appealing?
— Brad B. (@AFBaylorBear) April 22, 2021

It's totally about representation 😂 DC has more residents than Wyoming.
— Lawson (@o_Henchman) April 22, 2021

Nobody cares about your Montana lifestyle, Steve.

We do care about Americans and their right to equal representation under the law, however. This wouldn't bother you at all if your party was going to pick up seats in Congress, so it's really hard to take you seriously.
— Edward Teach (@EdwardT54126517) April 22, 2021

Considering that DC could not order the National Guard in on January 6th, it is important that they become a state because we still have Republican insurrectionists in Congress.
Hawley
Cruz
Johnson
Greene
Boebert
Biggs
Gosar
Brooks
Gohmert
Tuberville
Scott
Lee#DCStatehoodNow
— we need leaders (@mastersinleadin) April 22, 2021

The majority of Americans don't give a 💩how people in MT live their lives, we just don't want to be dragged back into the 1850's w/them.
We, the majority of the people, want a more perfect Union in the 21st century!
GQP's #KochSucking radical right-wing agenda is a FAILURE!
— AC (@Abhinary) April 22, 2021

"No taxation without representation*" I didn't realize there was an asterisk there. While we're at it, any territories who want full rights and representation as states should also become states.
— Teresa Young (@TKYmt2sn) April 22, 2021

'I should determine whether you have the right to vote based on your voting behavior,' isn't a very strong argument, Steve. I don't like that Montanans elected you but the rest of us live with it.
— Chris Fitzgerald (@cofitzgerald) April 22, 2021

"No taxation without representation unless they will vote for Democrats, then fuck 'em." Steve Daines https://t.co/8RKLgv1gLd
— Matt Ortega (@Matt Ortega)1619117000.0